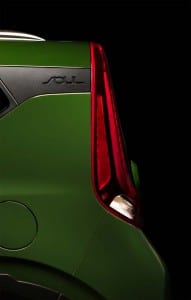 The annual L.A. Auto Show is approaching fast and that means manufacturers are starting to drop hints about all the new models they’ll be debuting in the City of Angels later this month.

The latest to weigh in with a teaser image is Kia, which will pull the wraps off the 2020 Soul at the Los Angeles Convention Center on Wednesday, Nov. 28.

Official details about the 2020 Kia Soul are sparse, the Korean carmaker noting only that “the Soul is all new for 2020 and will come to market with a bold, immediately recognizable design.”

We’ve been seeing spy shots captured at places such as Germany’s legendary Nurburgring in recent months and, indeed, the third-generation version of the crossover retains the basic shape that made it such an immediate hit following its original, 2009 debut.

(Kia shows off latest Niro model: the EV. Click Here for the story.)

The gen-3 Kia Soul is expected to grow slightly larger, though you might notice it at a casual glance. Spy shots, once you can get your mind past the camouflage, suggest slight revisions to familiar exterior cues, such as the vertical taillights that now appear to get a boomerang-like hook.

Under the skin, the 2020 Kia Soul rides on an entirely new platform that will be shared with the recently launched Hyundai Kona. That should give it a bit more sporty character, while retaining the quirky hatchback’s versatility. 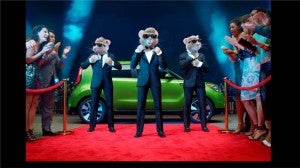 We'd be shocked if the Kia Hamsters don't return for the rollout of the 2020 Soul.

As for drivetrains, Kia hints that there will be “several … including turbocharged engines and zero-emissions electric options.” That should include a new version of the outgoing Soul EV. More significantly given the fact that it will share platforms with the Kona EV, that means there’ll be room for a much bigger battery pack capable of delivering more than 200 miles of range between charges.

Some reports have suggested it could even push close to 300, challenging the extended-range version of the Tesla Model 3.

The current Soul EV can only manage 120 miles or so. And its electric motor manages an anemic 109 horsepower and 210 pound-feet of torque. The Kona makes 201 horsepower and the new Soul EV will likely come in somewhere close. Barring a big upgrade in the gas engine line-up, in fact, the battery-electric model could become the most powerful in the Kia line. The turbo-four model is expected to top out somewhere in the range of 175 hp. 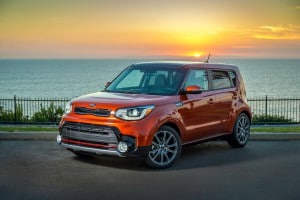 The second-generation Kia Soul is at the end of its run, but it was critical to growing the brand in the U.S.

Another new development will come with the addition of all-wheel-drive, for the first-time, sharing the same AWD system found on the gas-powered Hyundai crossover.

Hyundai and Kia have been pushing to end any hint of badge engineering in their individual product lines and there will likely be few who could confuse the Soul and Kona. That said, they will share that new platform and a number of underlying components, as well as key infotainment and safety technologies.

Expect to see the new Soul offer a number of advanced driver assistance systems, or ADAS technologies, such as blind-spot detection and forward collision warning with auto-braking. Hyundai has begun making many of these systems standard, with the exception of base models targeting fleet buyers. Kia is likely to follow a similar strategy.

(Kia bolsters line-up with launch of new Rio GT and ceed models. Click Here to check them out.)

We expect to learn more when we see the Soul in the sheet metal just two weeks from today.