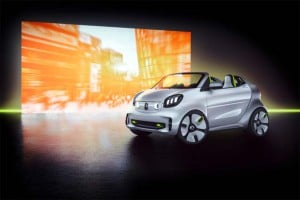 Daimler is marking the 20th anniversary of Smart with the new Forease open-air two-seater.

Its been a full 20 years since Daimler AG launched Smart, a brand that was intended to think outside the box, as the cliché goes, and provide a viable alternative to urban dwellers who still wanted to own their own car.

To celebrate the anniversary, Smart showed up in Paris with the Forease, a concept that “interprets and embodies urban driving fun in a refreshing way.” How much fun it really delivers is up in the air, quite literally, as the prototype notably rolls around without a roof, unlike the foldaway top of the current Smart Fortwo Cabriolet.

“The smart forease is proof that smart thinks unconventionally. Its design is reduced and pure,” said Gorden Wagener, the head of design for Daimler AG, which also rolled out nearly a half-dozen new Mercedes-Benz models in Paris. “The smart forease is a statement of urbanity and individual style. It has the coolness of the metropolis and demonstrates a truly free spirit.”

What ultimately became Smart dates back to 1982, when Nicholas Hayek, the CEO of the then ultra-cool brand of Swatch watches began exploring the idea of developing an equally cool urban two-seater. He initially approached Volkswagen but, when their deal collapsed, he inked a deal with Daimler in 1994. Ultimately, that “Swatchmobile” partnership collapsed, Hayek bowed out, and Daimler decided to go it alone, renaming the project Smart. 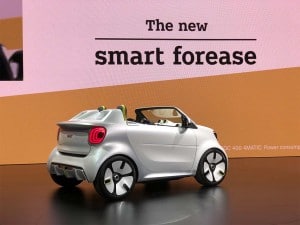 The new Forease will be an electric-only offering in Paris.

The debut of the original Smart Fortwo was hailed as the launch of a new era for Daimler, which was just in the process of creating its abortive “merger of equals” with American Chrysler Corp. One of the early ideas was to allow owners to swap out body panels on the little car, much like bands on a Swatch. That never happened, but Smart did roll out an assortment of different models, including a roadster and the four-seat Forfour.

Despite expanding the range, sales fell way short of expectations and many expected Daimler to kill off the brand. Instead, it pared back the line-up, primarily focusing on the original two-seater. It also tried to create a new market by launching what is now known as Car2Go, an urban car-sharing fleet that has popped up in cities around the world.

On Tuesday, Daimler CEO Dieter Zetsche announced that it will now offer only battery-powered versions of the Smart Fortwo in Paris, marking the fourth Car2Go market to go all-electric.

In fact, the plan is to phase out gas-powered versions of the Smart product line in most major countries, including the U.S. and Western Europe, leaving only some smaller markets to still receive gas-powered models.

How that strategy will play out is far from certain. Battery-powered vehicles currently account for barely 1% of sales in most major markets, but demand is beginning to take off as more long-range offerings come to market. The problem is that the micro-sized footprint of the current Smart offerings don’t provide room for a long-range battery. 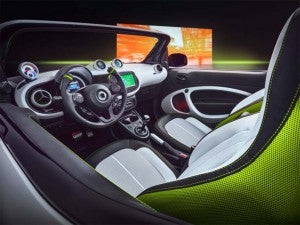 The new Forease comes only as an open-air model — there is no roof.

That problem hasn’t been addressed by the Smart Forease concept which seems to have little future beyond the auto show circuit. It’s doubtful that customers will find much of an advantage in having a roofless automobile, though the concept vehicle at least does add a little more creativity to its design than the current, box-shaped Fortwo.

Katrin Adt, who recently took over as head of the Smart brand, put in a brief appearance at the Paris show, driving the Forease onto the stage where she told Daimler CEO Zetsche her first goal will be to expand production to meet demand. Where that demand will come from isn’t clear.

In a move clearly meant to prop up Smart’s business case, Daimler will soon begin using its French factory to produce a new, long-range Mercedes-Benz electric vehicle. That could mark the first time the plant will come close to meeting its capacity.

The Forease is the latest in a string of distinctive concept vehicles from Smart, a list that includes 2001’s Crossblade and the Forspeed show car of a decade later. While it may hint at a more expressive approach to design, it seems to have little more chance of going into production. Not without a roof, anyway.

Smart still needs to find a breakout concept that will truly connect with urban buyers who increasingly have alternatives to owning a car, including car- and ride-sharing services like Car2Go.