Li Shufu, who is increasingly active in the global automotive industry, has moved to address the long-standing speculation that his wife was related to Chinese President Xi Jinping.

The carmaker, which owns a stake in Germany’s Daimler and the firm that makes London black cabs as well as Volvo Cars, disclosed in a filing the name of his spouse was Li Wang, and she jointly held 4.9 million shares in the firm.

Chinese and international media have often named Li’s wife as Peng Lijuan, triggering speculation she was related to China’s first lady, Peng Liyuan. The two share a surname and similar first name, according to Reuters. 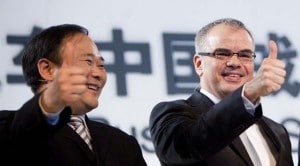 (Volvo backs out of IPO due to trade and market conditions. Click Here for the story.)

“We are trying to correct the rumors that Li Shufu’s wife is President Xi’s sister-in-law,” a Geely spokesman told Reuters.

As one of China’s fastest-rising carmakers, Geely has made a series of major investments outside of China in the past decade. Geely bought Volvo from Ford in 2010, with an initial investment of $11 billion. Since then the Swedish car maker has rebounded as it came up with capital for new platforms, a new engine family as well as the technology for electric and autonomous vehicles.

Speculation about Li Shufu’s connections appear to have intensified more recently as Chinese authorities have cracked down on capital outflows and “irrational” overseas deals. Last year, Geely spent more than $1 billion on Group Lotus and then earlier this year purchased nearly 10% of Germany’s Daimler AG, one of the world’s largest and best-known makers of cars and trucks.

Volvo, which is still managed from Sweden and maintains it raises investment capital from through its own operations, also has spent more than $1 billion on a new factory in the United States outside of Charleston, South Carolina.

(To see more about Geely plowing $1.98 billion into Lotus, Click Here for the story.)

The suggestion that Geely’s success was due to political influence would be highly sensitive, especially given that Xi is leading a crackdown on corruption that has snared scores of high-profile officials and business leaders.