EZ-Ultimo: A Design Bruce Wayne, aka Batman, Could Enjoy

Autonomous ride-sharing concept would target only the most elite customers. 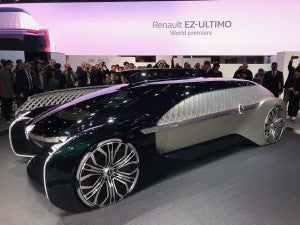 Renault designers must have been given the freedom to indulge themselves with the EZ-Ultimo concept shown in Paris.

As the media days wrap up, the public will be treated to the retro-futuristic Peugeot e-Legend concept, as well as the DS E-Tense, an electric supercar. But easily one of the most talked-about cars at an otherwise light Paris show was also one of the strangest, Renault’s EZ-Ultimo, which has alternately been compared to the Batmobile and “a rolling palace.”

But the best way to think about this fully driverless prototype is the marriage of a personal jet and a ride-share vehicle – one that is completely autonomous.

The EZ-Ultimo is positively massive, especially by European standards, measuring 224 inches nose-to-tail, while riding on a 152-inch wheelbase, or only slightly smaller than the Mercedes-Maybach Pullman limousine. Surprisingly, it’s quite low, at just 53 inches, in an era when almost everything else is adopting SUV proportions. 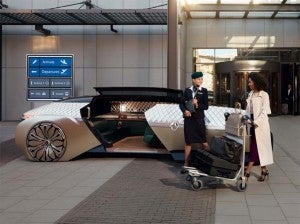 But, to make it easier for you to slip inside, not only do the concept’s massive doors slide open but the outer portion of the roof lifts up, a wee bit like the falcon-wing doors on the Tesla Model X.

Renault describes this “robo-vehicle” as a “mobile lounge,” and once inside you’ll discover what really is a cabin more like a very exclusive living room or lounge, rather than a conventional car. The roomy interior appears designed to let passengers all but forget they’re on the road, with a back bench more like a couch than the bucket seats you’d normally find in a luxury vehicle. Curiously, there’s only a single, rear-facing bucket where a conventional front seat might be, meaning that, as shown, the EZ-Ultimo really would be a three-seater.

Renault didn’t shy away from playing up the theme of affluence, outfitting the EZ-Ultimo not only with elegantly stitched leather, but also natural woods and satin metal finishes and even a bit of marble. 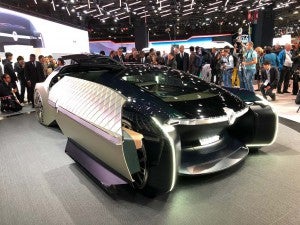 The EZ-Ultimo appears to have room for just three passengers as there is only one seat in the front.

As big as the EZ-Ultimo appears on the outside, it seems even more massive inside. By opting for an all-electric drivetrain, with virtually all components, including motors and batteries, hidden beneath the load floor, Renault returns to passengers space that would traditionally be devoted to the engine compartment.

(Click Here for more about Renault partnering with Google.)

From the outside, the EZ-Ultimo opts for a two-tone scheme, with a unique paint finish that appears almost jet black in most lighting but which can appear to change to sea green. That’s contrasted by a silvered metal used for much of the rest of vehicle, covering even side windows and rear quarter panels. It’s done up in a diamond lattice pattern that appears meant to reflect upon the French brand’s logo.

Virtually the entire upper portion of the driverless vehicle, from nose to tail, is glass, though it’s a one-way mirror finish to keep prying eyes from looking inside, though passengers could look at the world if they wish, using the tablet computers that tuck into special pockets inside the cabin. 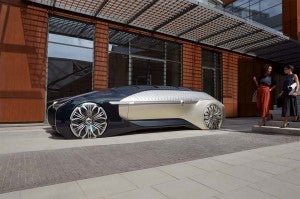 Renault's EZ-Ultimo is an autonomous ride with a unique style.

Renault apparently envisions offering the services of something like the Ultimo in a unique ride-sharing service for those with extravagant budgets. Of course, it could wind up in the high-line services offered by established operations like Uber or Lyft. Exactly how much might it cost for a ride? Renault isn’t saying. But there is one positive point to ponder: the human driver is the most expensive line-item in calculating the cost of a ride with services like Lyft. That’s why those companies – and upstart Waymo — are racing to come up with fully driverless vehicles that could drop costs sharply.

Renault officials are quick to note that the brand is primarily targeted at a mainstream audience, so the EZ-Ultimo has a more plebian cousin, the previously unveiled EZ-Go concept vehicle. And the French automaker has also showed off a driverless prototype that could serve the delivery and commercial markets, dubbed EZ-Pro.

(To see more about Carlos Ghosn’s denial of a Renault take over of the Alliance, Click Here.)

With everyone racing to rethink the car of tomorrow, reflecting the massive changes to come with electrified drivetrains and autonomous controls, Renault isn’t the only one drawing up some what-if designs. It follows, among other things the Mercedes-Benz F 015, as well as the Rolls-Royce 103EX Next concept vehicle that was revealed two years ago.