Shares slide on opening day over concerns about long-term growth. 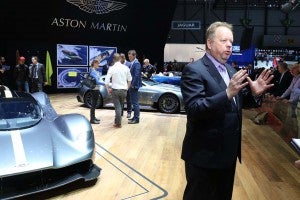 When they laid out plans to take the company public, Aston Martin executives clearly hoped to replicate the success rival Ferrari had with its own 2015 IPO, but things didn’t quite work out as expected, at least on opening day, with shares falling by day’s end to nearly a pound below the opening price of £19.

The decision to sell shares in the carmaker was described by Aston CEO Andy Palmer as “a historic moment” for a company best known for its long association with cinema spy 007. Indeed, it marked a major turnaround for a company that, early in the decade, seemed to many destined to face its eighth bankruptcy since being formed 105 years ago.

But while Aston’s backers praise the aggressive “Second Century Plan” put together by Palmer, skeptics raised concerns about whether the company could deliver on a goal of launching seven new core models, as well as an assortment of specialty models, such as the reproduction of the DB5 used in one of the James Bond franchise’s most iconic films, “Goldfinger.”

Aston, warned James Congdon, managing director of investment firm Quest, “has very aggressive growth plans. The execution of that growth needs to be flawless — nothing eats cash more than a car company when the cycle turns. There is concern that it’s more cyclical than the commentary has been.”

The highly anticipated stock offering will continue to be tested in the coming days as initial trading is being run on a limited basis ahead of full public trading set to begin on the London stock exchange next week.

Aston was hoping to raise about £1 billion, or $1.3 billion, through the initial IPO. But it has indicated that if demand is strong enough it would expand the sale, floating a full 27% of the company’s shares, something it estimated would be worth £4.3 billion, or nearly $5.6 billion.

Despite the market’s initially tepid respond, CEO Palmer said of the first day’s sale, “We are delighted by the positive response we have received from investors across the world and are very pleased to welcome our new shareholders to the register.”

Founded in 1913, Aston has focused on exclusive sports and grand touring cars, such as the ones most often driven by 007 on screen. The latest model, the DB11, has been joined by two other core model lines, including the newly launched DBS Superleggera. Aston plans to add an SUV in about a year and will also revive the long-dormant Lagonda sub-brand which will focus on all-electric drive for future models.

Even with just a handful of the new products in showrooms, Aston is now operating in the black for the first time in years, with sales numbers it hasn’t seen since the start of the Great Recession. But it will have to meet even more aggressive sales targets going forward to fund the plan, Palmer has acknowledged.

But critics question whether it can deliver, especially if the global luxury car market suffers any setbacks.

There are also plenty of folks pulling for Aston to make the IPO a success. It marks the first time a British automaker went public in decade. If anything, the country’s auto industry has suffered a substantial series of setbacks over the past 50 years. A number of once-familiar names, such as Rover, Triumph and Sprite, have vanished. Others have survived only under foreign ownership. Jaguar Land Rover is a subsidiary of India’s Tata. Bentley is part of the Volkswagen Group and Rolls-Royce is run by BMW.

Aston was saved by Ford Motor Co., which briefly also ran Land Rover and Jaguar. The Gaydon-based manufacturer was spun off by the U.S. automaker in 2007, initially sold to two Kuwaiti financial firms Investment Dar and Adeem Investment Co., with Italy’s Investindustrial later buying a stake.

Germany’s Daimler AG, parent of Mercedes-Benz, now holds a 5% stake, as well, and its CEO Dieter Zetsche said he was “pleased” with the public offering by late morning on the first day of trading. Daimler not only owns a stake in Aston but provides the British company with high-performance V-8s made by its own sports car unit, AMG.

In prepping for the IPO, Aston and its bankers clearly had an eye on the 2015 Ferrari offering which saw shares, initially priced at $52, jump almost immediately by 10%. The stock, traded as RACE, slipped $1.76 on Wednesday to $135.81 a share, which still puts Ferrari’s market capitalization at around $25 billion.

“It’s a big stretch for us to see how (Aston) can possibly match Ferrari’s profitability,” the auto analyst team at Bernstein wrote ahead of the public offering’s launch, adding a skeptical note that, “We can’t see it getting anywhere close.”

The next few days will reveal whether such skepticism was warranted.