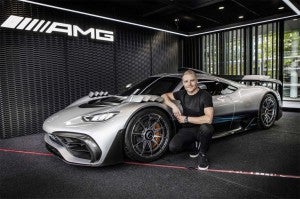 The Mercedes-AMG One is shown here in production trim, including its active aero system.

Project One has apparently become reality. Daimler AG is giving an official name to its upcoming hypercar. What was known until now as Project One will simply become the Mercedes-AMG One when it finally goes into production.

A near street-ready version of the $2.5 million hybrid two-seater will make its debut at the Paris Motor Show, the automaker announced this evening, the news coming just days after Mercedes released shots of the Project One prototype going through track testing on a course many believe to be the grueling German Nurburgring.

“The name stands for the highest automotive ambition: to bring Formula 1 hybrid technology to the road,” the automaker said, adding that, “Mercedes-AMG One will be the pinnacle of the model portfolio and the absolute top-of-the-line model – as is logically referenced by the One.”

The latest release from AMG headquarters in Affalterbach put an emphasis on the active aerodynamics of the new hypercar, including its multi-part, two-stage extendable rear wing.” 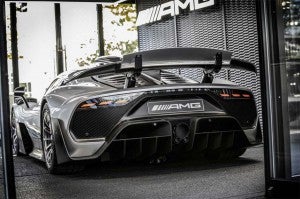 The new Mercedes-AMG One uses an active wing to increase downforce and improve handling.

The Project One vehicle we’ve so far seen actually looks more like a LeMans prototype than a Formula One race. It  has been generating buzz for several years, though we only got a look at a complete mock-up at the Frankfurt Motor Show last year.

Project One is not a direct lift. It’s not an F1 powertrain in a street-legal body, though it does rely on an incredibly compact 1.6-liter turbocharged V-6 engine. The track KERS – or Kinetic Energy Recovery System – is here modified into a plug-in hybrid system using four electric motors, one for each front wheel, another driving the crankshaft and the fourth powering the internal combustion engine’s turbo.

All told, the powertrain is expected to be able to spin up to a blinding 11,000 RPM and blast out something on the order of 1,020 horsepower – 671 of those ponies coming from the internal combustion side of the package, the rest from the electric motors.

Mercedes hasn’t released projected 0 to 60 times for the Project One, but it has suggested it will top out somewhere around 217 mph. 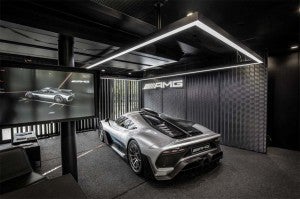 The new Mercedes-AMG One is expected to have a top speed of 217 mph, but 0-to-60 times have not been released.

The drivetrain, according to AMG, also will have the ability to travel about 15 miles in pure electric mode, though this likely isn’t the sort of vehicle that will get an imprimatur from the Sierra Club.

“Plug-in hybrid is going to be the future for AMG,” AMG Chairman Tobias Moers said last year. “We get more performance and more efficiency and what’s wrong with that?”

Buyers probably should be pleased that the drivetrain won’t be stock F1 considering the short life of a track engine. Revised Formula One rules now require each engine to last at least two races. By comparison, the Project One powertrain is expected to go in for a complete rebuild after 50,000 kilometers, or just over 31,000 miles.

As to what else we’ve now learned about the AMG Project One: To scrub off speed, the new two-seater will opt for carbon ceramic brakes, with wheel-mounted fins helping to keep them cool. 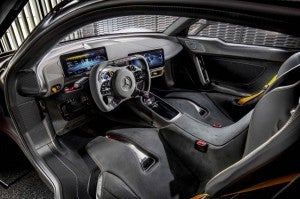 The interior of the Mercedes-AMG One offers all of the tech needed for a super car.

The suspension will go five-link front and after, and there will be two springs per corner, each paired with a single damper. The electronically controlled system will allow for variable ride height, the car hunkering down as low as possible at higher speeds to improve aero.

Visually, the Project One car is a stunner, and will feature gull-wing doors, much like the brand’s first supercar developed in-house, the SLS.

Aerodynamics and lightweighting are critical parts of the project and preliminary reporters indicate the production version should weigh in at less than 2,900 pounds thanks to the extensive use of carbon fiber.

Much of the initial work for the Mercedes-AMG Project One was done virtually, “behind closed doors for several months … in a highly complex, digital development process,” the company said in a statement accompanying these images. 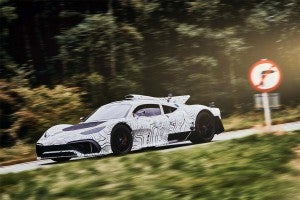 Much of the initial development work for the Mercedes-AMG Project One was done digitally.

Of course, one can only go so far on a computer. At some point, Project One had to start burning real rubber. Even if the current testing hasn’t gotten to the ‘Ring, we’d be surprised if that isn’t in the plans. Moers has, on more than one occasion, suggested Mercedes-AMG would like the hypercar to win honors as the fastest production car ever to loop the 12.9-mile Nordschliefe. Currently, the record holder is the Lamborghini Aventador Superveloce Jota, which managed a lap in a mere 6:44.97.

Not surprisingly, there’s a long list of anxious buyers. In fact, Mercedes-AMG has already heard from 1,100 hand-raisers – which means plenty of them will be disappointed, as plans call for a production run of just 275 of the hypercars. Each will carry a price tag of just over $2.5 million.

(Debut of EQC launches Mercedes into long-range, all-electric market. To check it out, Click Here.)

Those who want to keep up with the development program will be able to point their browsers to a new “mobile showroom” Mercedes-AMG has developed, called “The Future of Driving Performance.”