But you’ll have to go to Japan to buy one for now. 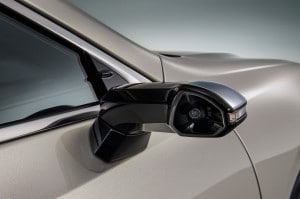 The new Lexus ES will become the first car to offer cameras to replace side mirrors — in Japan.

If you’re driving in Japan in the coming months and catch a new 2019 Lexus ES rolling up from behind in your rearview mirror you might notice something odd: the sideview mirrors might seem oddly small.

That’s because the ES has become world’s first mass production automobile to offer optional sideview cameras, replacing standard mirrors. It’s a concept carmakers have been toying with for years and could become commonplace in the not-too-distant future, experts say, with Audi set to offer a similar feature on its first all-electric model, the e-tron.

“The digital mirrors will make their debut on the new ES, which will go on sale in late October,” explained a news release from Toyota’s luxury brand.

Technology helps see cars these days. But there are other reasons why automakers like the Lexus Digital Outer Mirror and similar systems. Conventional sideview mirrors are big and catch a lot of air when you’re blasting down the freeway. That not only means mileage-robbing aerodynamic drag but a lot of wind noise that engineers have to find ways to mask.

(Lexus makes it official and debuts the new millennial-focused UX crossover. Click Here for the story.)

The smaller the stalks hanging off the side of the car the better. The Lexus Digital Outer Mirror is smaller than conventional sideview mirrors but still relatively bulky. If recent prototype models, like the Infiniti Q Inspiration Concept and the original Tesla Model X show car, are any indication, we’ll see those side cameras shrink down to a size not much bigger than a lipstick tube. 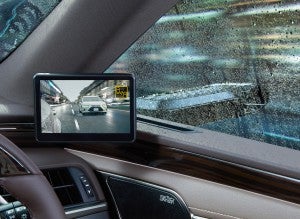 The monitor for the camera is essentially in the same spot as the mirror it replaces.

The Lexus system takes the images captured by the two side cameras and displays them on separate 5-inch video monitors mounted on the base of the left and right A-pillars. They offer a wider view than traditional mirrors and can be enhanced with greater detail with the touch of a button. The monitors also flash the increasingly familiar blind-spot warning icon when another vehicle is positioned where the driver normally might miss it.

Lexus claims the camera mounts are shaped in a way that will prevent them from being obscured by a build-up of snow, ice or rain.

The Lexus system may be the first to replace sideview mirrors with cameras, but Cadillac can claim to be the first mass-market brand to use a camera mirror on one of its vehicles. That system acts like a supplement to the rearview mirror mounted on the windshield. First offered on the then-new CT6, Caddy’s flagship sedan, it supplements, rather than replaces, the mirror. A videoscreen is hidden underneath the conventional mirror, and is activated by the flip of a switch.

The camera is mounted at the rear of the vehicle, meaning a driver’s vision isn’t obstructed by obstacles inside the cabin, whether passengers, headrests or cargo. As with the Lexus Digital Outer Mirror, the system offers a slightly wider field of vision than a conventional mirror and not everyone is comfortable with the image’s slightly different perspective. That’s one reason Caddy can’t replace the conventional mirror entirely. Motorists must be able to switch back and forth under federal guidelines. 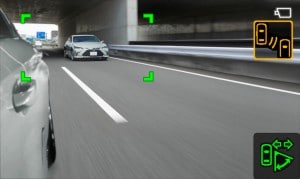 The cameras offer a wider view of the side of the vehicle, eliminating the blind spot.

The digital rearview system is now being picked up by several other companies. And Lexus isn’t expected to have a monopoly on its sideview camera system for long. Next week Audi will officially unveil its aforementioned all-electric e-tron offering buyers digital sideview mirrors when the car goes on sale in Europe later this year.

The technology won’t be offered when the Audi e-tron reaches U.S. shores early in 2019, however. Nor will it be available for American buyers of the Lexus ES, at least not anytime soon. For now, the National Highway Traffic Safety Administration says it is still studying the concept, but the regulatory agency has set no timetable for giving its blessing to the concept.

(To see more about the Audi e-tron, Click Here.)

That forced Tesla to drop the camera system it showcased on the original Model X concept that it had hoped would translate into production. Tesla and several other manufacturers have filed petitions with NHTSA to follow through with regulations, however, and we could see the first American versions of the Lexus Digital Outer Mirror in the next few years.