Over 1 million turn out, but the cars are the stars at the 24th annual Woodward Dream Cruise. 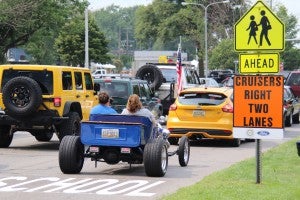 Bob Chesnicki and his wife have long wanted to make it out for the Woodward Avenue Dream Cruise. They finally showed up in this T-Bucket for their 32nd anniversary.

Angel was one of an estimated 1.5 million people who lined a 16-mile stretch of the eight-lane boulevard that bisects Detroit and its northern suburbs for the 24th Woodward Dream Cruise, an annual event that was expected to draw cars and spectators from as far away as New Zealand, Australia and the former Soviet Union.

Angel, a former school teacher, only had to travel from Savannah, Georgia, but waited until he retired to finally get to see the Dream Cruise, he explained, because the school year in Georgia normally started in early August.

“It’s beyond my wildest expectations,” gaped Angel, who spent a few years working on a General Motors assembly line in Tarrytown, New York, building some of the same muscle cars that were driving along Woodward on a steamy hot Saturday afternoon.

Greg Finn, right, is looking to impart a love of classic cars on his grandsons at the Dream Cruise.

The Dream Cruise began almost accidentally. Back in 1994, Nelson House, a plumber in the Detroit suburb of Ferndale, wanted to find a way to change up the traditional show his car club put on. Rather than the usual, static display, with the cars stuck in a parking lot, House decided to have them cruise Woodward Avenue, which, back in the 1950s and ’60s, had one of the country’s most robust cruising cultures, fueled by the Detroit automakers who would often bring out their latest muscle cars to test their mettle. He also added a charitable element as well with initial proceeds going to help build a soccer field in Ferndale.

(Woodward Dream Cruisers out early and often. Click Here for the story.)

Organizers expected perhaps 30,000 to 40,000 people, along with a few hundred cars, might show up. Instead, the turnout was closer to 250,000. And the Woodward Dream Cruise has grown almost every year since then. Organizers this year were expecting at least 40,000 true cruisers to roll down Woodward, along thousands of more traditional vehicles who came along for the fun. Even on a road as wide as Woodward Avenue, that meant traffic was down to a crawl on the normally fast-moving highway, more than a few cars pulled over, hoods up and radiators steaming.

Kent Kelley was just happy to just find a parking spot for his 1971 Plymouth Road Runner along the main part of the long Cruise route. The candy orange coupe was the classic barn find or, more accurately, something he found on a chicken farm in South Carolina and purchased for $20,000 – before investing another $20,000 into restoring it.

Robert Angel came from Savannah, Georgia, to finally get a view of the Dream Cruise after retiring from teaching.

It was a fortuitous find. Growing up, Kelley’s favorite uncle worked for the old Chrysler Corp. and his garage was routinely filled with muscle cars and automotive memorabilia, including the poster showing an identical, orange Road Runner.

“Every time I went to his garage I saw the same ad and the cars he brought home,” said Kelley. “I got Mopar in my blood,” he said, referring to Chrysler’s parts and performance division.

While Dream Cruise is officially a one-day show, the cruisers start show up by mid-June on warm weekend evenings, the turnout steadily growing as the big event approaches. One advantage is that traffic along Woodward normally moves at a fair clip and those with the right cars can be heard squealing tires with relative impunity.

This red hot rod is one of the many customized machines cruising Woodward this weekend.

During the Dream Cruise itself traffic moves at a crawl and even if someone could spin their tires at a stoplight they’d likely be rewarded with a ticket from one of the hundreds of police officers pulling Cruise duty.

One of those who likes to get an early start on her cruising is Francine Moore of Livonia, a Detroit suburb. “I’ve been coming here for years,” she said, and “came out on Wednesday, too. I took my son out. I got him into cars.”

Kent Kelley shows off the promotional poster that hyped his '71 Plymouth back in the day.

“Muscle cars are my favorite. I like the older cars too. Those two I can watch all day,” Wilcox said as he relaxed in a lawn chair next to Moore.

Spend a little time cruising Woodward on Cruise Saturday and you might note that the crowd is disproportionately made up of Baby Boomers and, to a lesser degree Gen-Xers. There’s a notable shortage of Millennials and Gen-Y, though retiree Greg Finn is determined to correct that, at least on a personal level. He brought not only his son but also three grandchildren, ages 9, 7 and 4, to this year’s Cruise for the first time.

“It doesn’t matter how old you are, you get here and you really wind up enjoying it,” Finn said. But seven-year-old Garrett Munger was clearly indifferent when asked about the GTOs, Camaros and Mustangs passing by. Muscle cars? “What are those?” he asked with a shrug. “I like the trucks.”

There were at least a few complaints about this year’s Cruise. Tom Cach and Ron Virgh, two retirees from the old Ford Rouge plant, came to see muscle cars and hot rods, not minivans and econocars.

“I’d like to see the soccer moms get out of the right two lanes,” said Cach, suggesting the police ticket anyone not driving a classic cruiser and donate the money to charity.

On the left, 600-plus horsepower and on the right, 6 horsepower.

While the Woodward Dream Cruise might harken back to the era of classic muscle cars, it’s a rather eclectic event that draws some odd and unusual vehicles, some created specifically for the Cruise. Last year saw one vehicle that had been flipped upside-down, its original wheels seemingly spinning in the wind. Another mounted a motor on a shopping cart.

For his part, Dave Brice showed up in a 1977 Citicar. With its six horsepower electric motor it was clearly not about to get a ticket for smoking its tires. But it found its fans, too, waving and giving the battery-car a thumbs up as it passed by.