“The sentiment, in a nutshell, was ‘please don’t do this.’”

Less than three weeks after suggesting he was ready to take Tesla private – in the process triggering an SEC investigation – CEO Elon Musk advised employees late Friday night that he has bowed to pressure and will keep the automaker a publicly traded company.

The latest move caps an increasingly turbulent period for the South African-born entrepreneur who has come under increasing scrutiny in recent months. That is, in part, due to his frequent tweets, but also because of some of the spats Musk has gotten involved in, at one point using a slang term for pedophile to describe a diver who helped rescue a young soccer team trapped in a flooded Thai cave. He has also been called out by rapper Azealia Banks for alleged drug use on the night Musk first tweeted about taking Tesla private.

“Although the majority of shareholders I spoke to said they would remain with Tesla if we went private, the sentiment, in a nutshell, was ‘please don’t do this,'” Musk wrote in a late Friday e-mail to the automaker’s employees.

Tesla’s board of directors, which was apparently blindsided by Musk’s original privatization proposal tweeted on August 7, supported the decision to abort the move to privatize. The board also appeared aimed at diffusing speculation that there was a growing rift between it and the CEO. 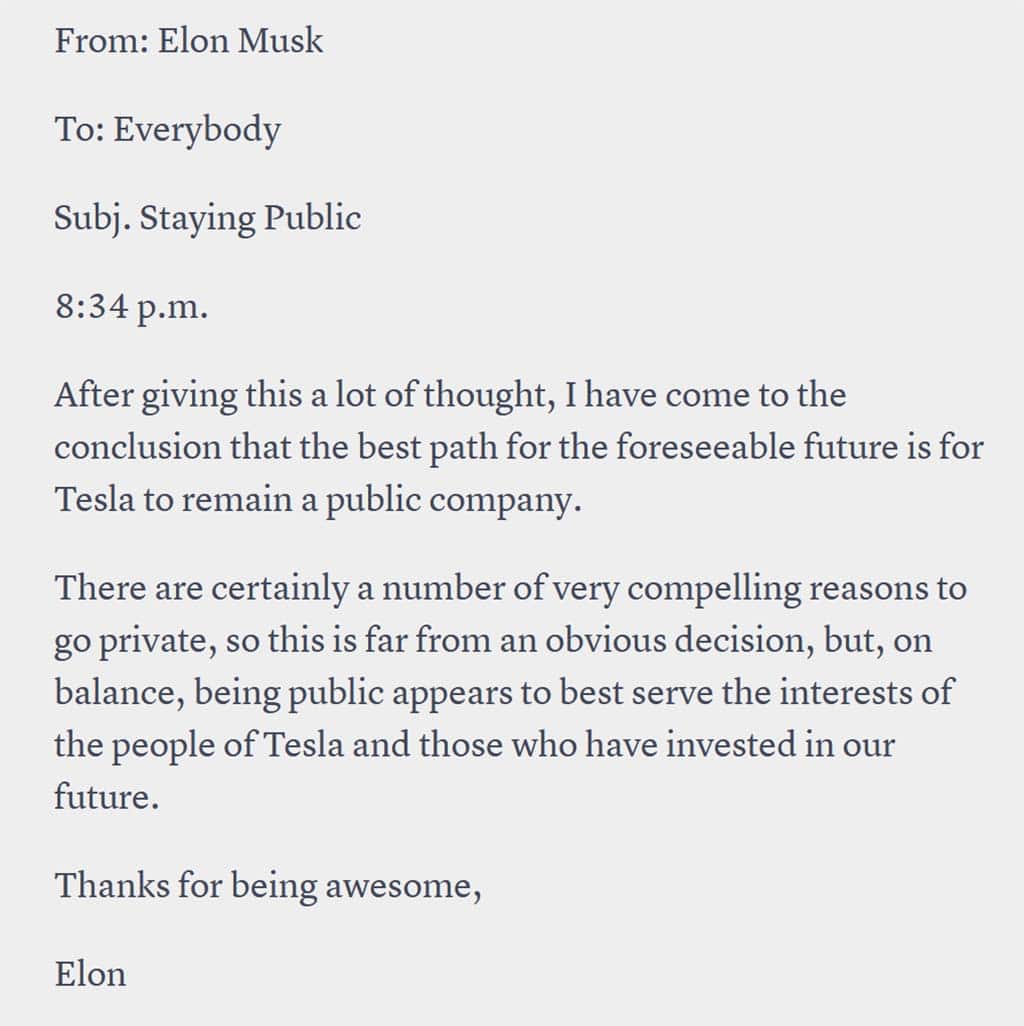 “We fully support Elon as he continues to lead the company moving forward,” the statement read.

Tesla went public in 2010 and has had a wild, but mostly upward, ride since then, its shares peaking at just over $389 over the past year. Nonetheless, short-sellers have been predicting a sharp downturn, much to the frustration of Musk. There was widespread speculation that this could have played into the Tesla co-founder’s desire to take the company private where it would be less subject to investor review and pressures to keep pushing the stock ever higher.

The original tweet on the possibility of going private was brief, reading, “Am considering taking Tesla private at $420. Funding secured.”

For those in on doper slang, “420” is a familiar reference to marijuana. And it led to a number of questions from critics about what Musk might be smoking. Such speculation got a boost this past week when rapper Azealia Banks, a friend of the singer Grimes, whom Musk has been dating, put out a tweet of her own. Banks claimed she was staying at the CEO’s home in Bel Air when he posted the initial privatization tweet, and she implied that Musk was high on LSD at the time.

Musk has denied using the drug and countered that Banks wasn’t even at the home on the night in question. As for the $420 price, he suggested in a blog post that it seemed an appropriate figure based on where Tesla’s shares were heading. Whatever the reason, it would have given Tesla a valuation of more than $70 billion. 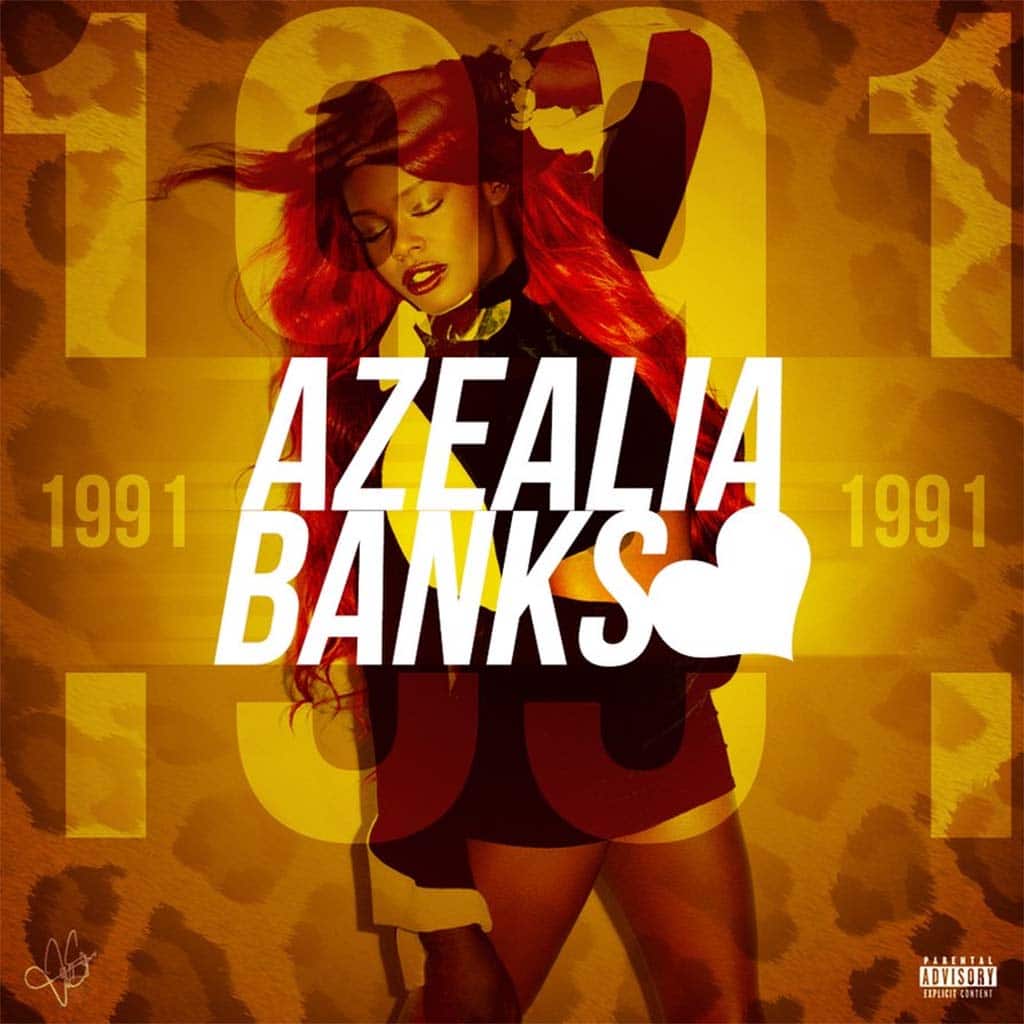 It’s unclear whether the question of drug use will come up in the investigation launched by the Securities and Exchange Commission.The bigger question is why Musk made the announcement and what backed it up.

While using social media to post news has been upheld by the courts, companies are still required to comply with key regulations. Among other things, they can’t use such posts to manipulate stock prices.

Tesla shares soared in the hours after the August 7 post, the NASDAQ exchange itself coming under fire for not immediately suspending trading in TSLA shares. When it did respond, the exchange only briefly suspended trading, triggering further criticism. Within days, the share price took a tumble, recovering only slightly in recent days, even as the prospects of privatization have generated further skepticism.

Musk appeared to be trying to provide cover with a blog that was posted almost a week after the initial tweet. He said his announcement was based on conversations with officials from a Saudi Arabian sovereign investment fund, indicating they were set to back the bid. But details were scarce and didn’t do much to convince skeptics.

“I knew the process of going private would be challenging, but it’s clear that it would be even more time-consuming and distracting than initially anticipated,” Musk said in the e-mail issued around 11 PM Eastern Time this Friday. “After considering all these factors, I met with Tesla’s board of directors yesterday and let them know that I believe the better path is for Tesla to remain public.”

Given the weekend timing of the e-mail, response from the financial community has been slow. It remains to be seen if short-sellers will try to benefit from the decision when trading resumes next week. Several have filed lawsuits against Tesla and its CEO alleging the original announcement about privatization was inappropriate and cost them hundreds of millions of dollars in losses. 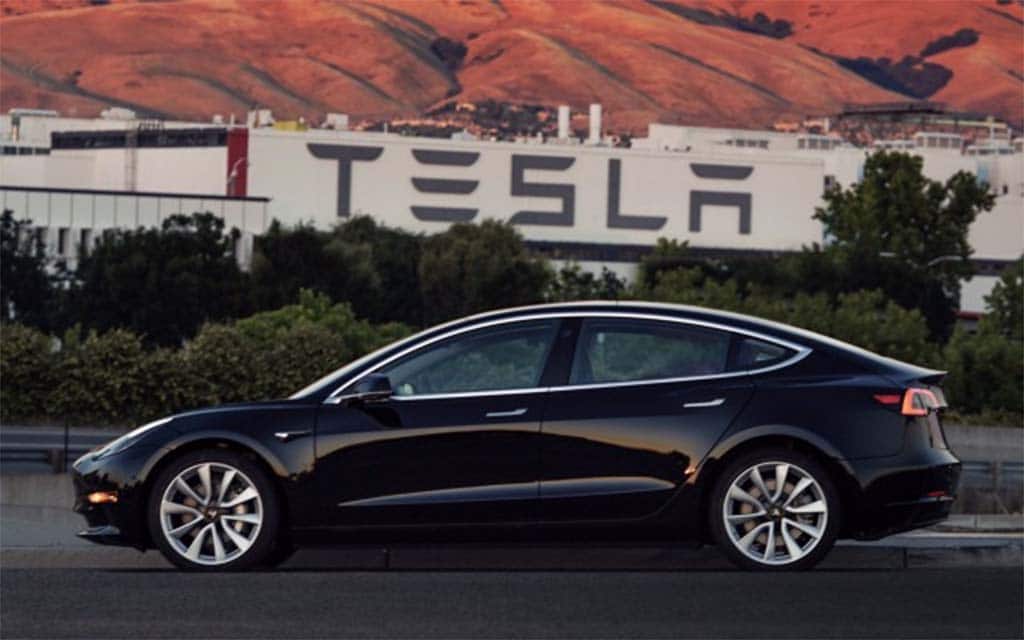 Tesla will remain under close scrutiny now, as it races to boost Model 3 production and deliver a profit.

Friday night’s announcement likely will do nothing to reduce the broader scrutiny of both Tesla, meanwhile, and especially its CEO. Questions about Musk’s leadership have been growing in the media in recent months. In May, the 47-year-old chief executive was criticized for his handling of Tesla’s first-quarter earnings call after dismissing the questions of several analysts as “boring.” He raised even more concern after engaging in a brief but nasty spat with one of the Thai rescue divers, at one point dubbing him a “pedo,” slang for “pedophile.” Musk subsequently apologized.

Earlier this month, Musk told the New York Times that the last year has been personally “excruciating,” adding that “the worst is yet to come.” In the interview he indicated he has been working as much as 120 hours a week in his bid to resolve production problems with Tesla’s Model 3 sedan and often didn’t step outside the office he had set up at the Fremont, California assembly plant “for days” at a time.

Such eccentricities may actually endear the executive to a loyal cadre of social media followers and Tesla buyers, but they could complicate matters for Tesla itself.

On the plus side, Model 3 production appears to be accelerating quickly, analysts from Evercore ISI confirmed in a report this month. That’s essential if the company is going to deliver on Musk’s promise of a profit, as well as positive cashflow, for the second half of 2018.

Even if it does, there are plenty of skeptics, including analysts at JPMorgan, that expect Tesla will need to raise new capital in the next year, despite Musk’s assurances that it has enough cash on hand.

What’s clear is that by scrubbing plans to go private, Musk and Tesla will remain under the microscope.