Infiniti Goes Back to the Future with Prototype 10

Concept is the "manifestation" of brand's future powertrain strategy. 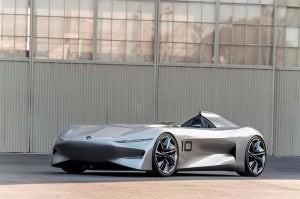 There’s something odd about the Infiniti Prototype 10. Catch a glimpse of it from one angle and you’re transported back to an earlier era of motorsports. Nose-on, however, the concept speedster takes on a very modern appearance.

Infiniti has been teasing us with heavily disguised images of the Prototype 10 for some weeks, now, finally giving us a good look at the one-off model during a preview helping mark the start of the annual classic car weekend on the Monterey Peninsula that wraps up with the Pebble Beach Concours d’Elegance.

The luxury arm of Nissan has been a familiar corporate face at Pebble Beach, just last revealing the Prototype 9, an even more retro-shaped concept race car. What that model and the Infiniti Prototype 9 have in common, however, is what the maker calls the “physical manifestation” of its future powertrain strategy. With only a rare model or two, all future Infiniti products, it seems, will migrate to some form of electrification, from plug-in hybrid to pure battery-electric, like the powertrain in the Prototype 10.

“Prototype 10 highlights the shift towards powertrain electrification for Infiniti,” explained the brand’s President Roland Krueger. “In the near future our cars will offer high performance, extended driving range and the intelligent management of energy.” 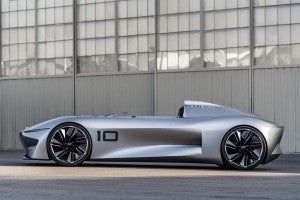 The Infiniti Prototype 10 may be providing insight into the brand's future product design and function.

Though its wheels are framed in by muscular sheet metal, the profile view resembles that of the classic open racecars of the 1940s, ‘50s and ‘60s, starting with the long hood and the fin behind the driver’s head. The one-seater is more elegantly sculpted than those old, typically slab-sided racers, however, drawing air in through large intakes ahead of the back wheels to keep the electric drivetrain cool.

The cabin is completely open, though it again opts for a more modern track-designed steering wheel that’s flattened out at both top and bottom. Within the wheel is a small video display, apparently meant to give the driver instantaneous read-outs on vehicle data. 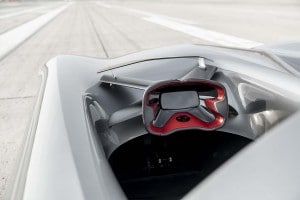 Bridging past and future, the Prototype 10 recaptures the spirit of early speedsters for an era of electrified performance.

“For us, Prototype 9 evoked the thrill and drama of early open-wheeled racing, and Prototype 10 represents another passion project for our designers,” said Infiniti design chief Karim Habib. “This idea of ‘looking back to go forward’, and combining the inspiration of an earlier aesthetic with future technology, lets us show how excited we are about the era of electrification. Prototype 10 draws on some of the most iconic and evocative car designs of all time to illustrate this excitement.”

This is the first major project to come to fruition under Habib, who was hired away from BMW just a year ago. A close look reveals some of the detailing he may start introducing to a brand that has become intensely design-focused in recent years.

As for electrification, Infiniti came close to entering that emerging segment early in the decade with what was going to be little more than a more lavishly equipped version of the Nissan Leaf sold by its parent. That likely wouldn’t have done much better than what Cadillac experienced when it tried to launch a high-line version of the Chevrolet Volt plug-in hybrid. 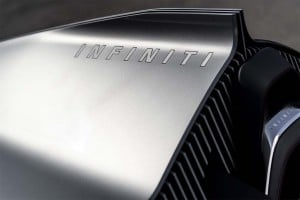 Infiniti unplugged for a while, searching for a formula likely to be more appealing to luxury buyers. While it has yet to offer much detail about where its electrification strategy will take it, future all-electric models are expected to offer much better acceleration than the latest Leaf, and even better range.

That’s certainly the approach high-line competitors ranging from Audi to Porsche to Volvo plan to take.

As for the Prototype 10, Infiniti notes in a news release that it is “purely a design study,” though it then adds “at this stage.”

(Click Here for a look at the retro-futuristic Infiniti Prototype 9 Concept.)

Does that suggest it might revisit the idea of a one-seat, open-air electric speedster? We may just have to wait and see if it might come up with a special program sometime in the future.