Base model to start at $4,000 over Chevrolet Colorado. 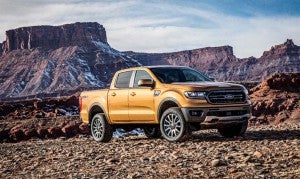 After a lengthy absence, the Ford Ranger is about ready to return to the U.S. market and shoppers now can price and build their own version of the midsize pickup at a special micro-site the Detroit automaker has launched.

Set to reach showrooms early next year, Ford will be offering a wide array of body styles, bed and powertrain options, ranging from the base, 4×2 SuperCab XL with a six-foot box, up to the more lavishly equipped 4×4 SuperCrew Lariat with a five-foot cargo box.

But the heavily updated version of the global Ranger launched earlier in the decade won’t come cheap. The 2019 pickup will carry a starting price of $24,300 plus $1,095 in delivery fees. That’s about $4,000 more than its cross-town competition, the base, extended cab version of the 2019 Chevrolet Colorado starting at $20,500. And for truck buyers on a tight budget, the aging Nissan Frontier starts at just $18,900.

(Ranger Reborn! Click Here for a closer look at the 2019 Ford Ranger. ) 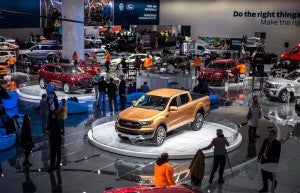 The new U.S. version of the Ranger made a Detroit Auto Show debut last January.

Even General Motors’ more well-trimmed GMC Canyon will undercut the new Ranger, with a starting price of $21,400 before delivery fees.

The 2019 Ford Ranger will by no means be the most expensive vehicle in its segment to get into. You’ll have to shell out $25,400 to get into a bare-bones Toyota Tacoma, and $29,990 for a Honda Ridgeline.

Meanwhile, buyers will be walked up the price ladder pretty quickly by Ford. A 4×4 version of the SuperCab jumps anywhere from $2,000 to $4,000 over the 4×2 package, for example, and a SuperCrew model is likely going to be hard to find under $30,000. Meanwhile, that 4×4 SuperCrew Lariat with the five-foot cargo box will start at $39,480 – including delivery fees but before options.

Ford once was a major player in midsize trucks, but with the segment‘s sales seemingly on a fast decline to nowhere it invested little in updating the Ranger and, on December 22, 2011, the last one rolled off the line at the Twin Cities Assembly Plant in Minnesota. 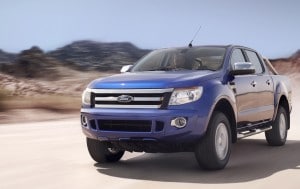 The new U.S. Ranger is a heavily updated version of the global Ranger pickup launched in 2011.

The company wasn’t abandoning midsize pickups entirely, launching a new, international version about the same time the U.S. model was sent to the scrapheap. The new model has increased Ford’s global presence and even became Europe’s best-selling pickup in 2015.

By then, several Ford competitors had begun to think that reports of the demise of the American midsize pickup market might be greatly exaggerated. General Motors waded back into the pool with its Chevy Colorado and GMC Canyon models, winning much acclaim and strong sales. Honda followed with a reborn Ridgeline, the only crossover-based model in the segment. Toyota did a major Tacoma makeover. And Nissan is readying an update of the Frontier, now the segment’s oldest offering.

The two holdouts are Fiat Chrysler and Ford. Mark Fields, Ford’s former CEO, was reluctant to spend the money needed to homologate the global Ranger for the U.S. market and was long convinced that bringing it back would simply eat into sales of the bigger and more profitable F-150. But, before his May 2017 ouster, Fields signed off on Ranger’s revival. 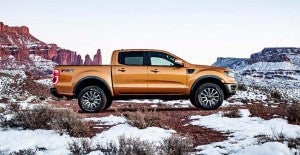 Starting today, U.S. motorists will be able to “build” and price a new Ranger, though deliveries won’t begin until early next year.

“As transaction prices continued to grow for full-size pickups, we saw an opportunity,” said Todd Eckert, Ford’s Truck Group Marketing manager. “We think this is an opportunity to bring back some of our former Ranger customers and get new buyers.”

The carmaker showed off a prototype at the North American International Auto Show earlier this year, though it cautioned that sales wouldn’t begin until early in 2019.

The 2019 Ford Ranger isn’t just a downsized F-150. Nor is it just a tweaked version of the midsize pickup sold overseas, company officials revealed during a background briefing on the new truck. Virtually every body panel and a significant portion of what’s underneath the skin has been revised for the North American market. There’s also plenty of infotainment and safety gear meant to appeal to U.S. buyers.

“We’ve touched every exterior panel,” said Max Wolff, who oversaw exterior design, even the rear glass that gets a new pass-through.

Ford also plans to add a high-performance Raptor version of the new Ranger.

The new Ranger won’t offer quite the variety of the big F-150, but there will still be three trim levels and a choice of either a Super Cab or Crew Cab, as well as two bed lengths. There’ll even be eight available wheel options.

(Is Ford working up an even smaller, car-based pickup? Click Here to find out.)

Production of the 2019 Ranger will be handled by Ford’s Wayne, Michigan assembly plant. That’s the same facility that will handle the Bronco SUV also set to make a comeback. Both will share the same underlying platform.

As for the remaining Detroit hold-out, look for a new midsize pickup from FCA’s Jeep division to arrive next year. And, during a June meeting in Milan called to unveil the company’s next five-year plan, former FCA CEO, the late Sergio Marchionne confirmed a new midsize Ram pickup also is in the works.