Just like the first one, it came out Wimbledon White. 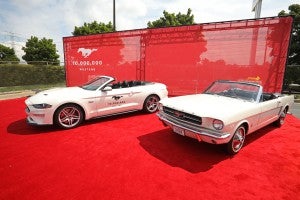 Ford marked the production of the 10 millionth Mustang with a huge party, including the very first Mustang built. Both are in Wimbledon White.

Ford Motor Co. celebrated the building of 10 million Mustangs in style with a parade, air show and lunch for hundreds at the assembly plant outside Detroit in Flat Rock, Michigan, where the fabled pony car is now built.

A parade of 54 Mustangs, one from each year the car has been sold during the past half century since it debuted at the 1964 World’s Fair in New York City was organized in the parking lot in front of Ford World Headquarters in Dearborn, Michigan.

As the Mustang owners sipped coffee and munched on donuts, they talked about how much their lives intertwined with the car and its storied history that includes a starring role in more movies than any other vehicle.

“Its been part of my life for a long time,” said Mike Magri of West Bloomfield, Michigan, who has owned five different Mustangs since he bought his first one in 1988. 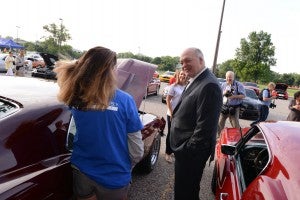 Ford CEO Jim Hackett talked with Mustang fans who turned out the celebrate the 10 millionth Mustang.

Magri said his father also owned Mustangs. “My father was a truck driver, but he was a Ford guy,” Magri said.

“It’s affordable.” said Joanne Campau, another Mustang fan from Livonia, Michigan. “It’s a performance car without being exotic,” she added.

Sheila Wahl said she and her husband have two. They drive one around their winter home in Fort Myers, Florida, and the other around their home on Grosse Isle, in suburban Detroit. She and her husband, Ron, also helped organize the Mustang Club of Southeastern Michigan, which has more than 600 members.

Peter Dunbar of Detroit said he spent 31 years building Mustangs at Ford’s Dearborn assembly plant but never owned one. Finally, he purchased a 2006 Mustang with a unique “Legend Lime” color that catches all kinds of attention. “I liked the body style,” he added. 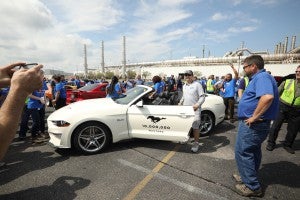 Ford employees cheer the 10 millionth Mustang as it rolls out of the Flat Rock, Michigan plant.

Meanwhile Ford CEO Jim Hackett noted the Mustang is now exported to 146 countries and that it is the best-selling sports coupe not only in the U.S., but also in Germany.

The caravan of 54 Mustangs traveled some 15 miles under police escort to the factory in Flat Rock, where the 10 millionth Mustang rolled off the plant’s assembly line accompanied by two of the plant’s employees.

Actually, two Mustangs rolled off the Flat Rock assembly line, one in Wimbledon White, the color of the very first Mustang, and another in red.

“This is a major milestone in Ford Motor Co. history,” said Deb Manzano, the manager of the Flat Rock plant. 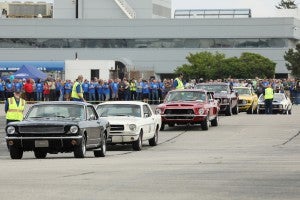 A parade of 54 Mustangs traveled from Ford World Headquarters in Dearborn, to the Flat Rock plant where the 10 millionth pony car was made to mark the event.

The ceremony marking the 10 millionth Mustang was punctuated by the flyover of three World War II Era P-51 Mustang — the fighter plane that was the car’s namesake.

“The Mustang is the best-selling sports car in history,” said Ford Executive Vice President Jim Farley, who told reporters the largest Mustang dealer in the world is in Stockholm, Sweden.

Ford has sold 480,000 Mustangs in recent years. “Mustang has been successful because it represents the heart and soul of the Ford Motor Co.” Farley said, adding the Mustang also will serve as the inspiration for Ford’s electric vehicles in the future.