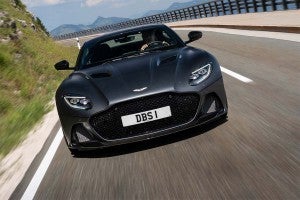 The Aston Martin DBS Superleggera becomes the 3rd in what will become a 7-model line-up.

We’re not quite at the top of the world, but from our perch high up in the quaint Bavarian mountain town of Berchtesgaden, one can see nearly forever. But it’s the guttural roar echoing off the steep and rocky Alpine cliffs that has caught our attention. Faint, at first, it grows ever louder, until the sleek GT coupe pops into view, racing through the mountain pass towards our hotel. The good news is that the driver will soon be handing us the keys to the 2019 Aston Martin DBS Superleggera, the car we’ve crossed an ocean to drive.

Low, wide and finished in what Aston dubs “satin xenon” paint, the Superleggera has an imposing presence. Not surprisingly, it bears a strong resemblance to the DB11 that came to market barely a year ago, as well as the more aggressive Aston Vantage that followed. Indeed, all three share their underlying platform, albeit with some notable revisions to DBS to handle its incredible power. It is, in fact, the third in what the British automaker promises will be a series of seven distinct models and, for at least the moment, replaces the familiar Vanquish nameplate – though there are hints that badge may yet return.

The DBS Superleggera also shares the same 5.2-liter twin-turbo V-12 found in the DB11, albeit with some notable revisions, including significantly more boost, meant to punch it up to a spectacular 715 horsepower and 664 pound-feet of torque. With its heavy emphasis on lightweight carbon fiber, the 2+2 weighs in at around 3,725 pounds. Do the math and you’re talking about a foreboding power-to-weight ratio that allows for 0 to 60 launches in a mere 3.3 seconds and a top speed of 211 mph. It also gives Aston bragging rights when compared to a Ferrari 812 Superfast, which has about 147 lb-ft less torque. 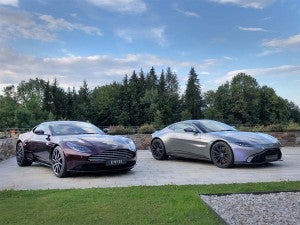 The new generation of Astons began with the launches of the DB11 (l) and Vantage.

Aston is positioning the DBS Superleggera as a GT car and, as we discovered during a long day of driving through the picture postcard countryside where Germany meets Austria, that’s more than appropriate. The latest Aston entry delivers incredible, neck-snapping power on command, along with the sure-footed handling of a mountain goat. But it also provides a level of comfort that could make you want to keep on driving long after you’ve passed your intended destination.

Visually, the DBS is a “brute in a suit,” suggested Aston’s Chief Creative Officer Marek Reichman, with its sleek, teardrop skin stretched almost too tightly on its frame. “It’s about emphasizing the power,” he adds. “We’re showing off.”

The newest entrant is wider than the DB11 and boasts a longer wheelbase, though it actually doesn’t stretch quite as long with its shortened overhangs. The black mesh grille is unique to the DBS and, among Aston loyalists, a bit controversial. The car does need the opportunity to breathe more deeply, however, and Aston has revised the louvers in the carbon-fiber hood, as well, to further assist. Wrap-around LED driving lamps give the Superleggera a cat’s eye look. 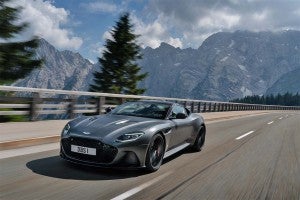 One downside is that Aston has limited torque in the first few gears because of the DBS gearbox.

There’s significant sculpting to the body, Aston boasting the DBS delivers Tesla-level drag numbers despite steps taken to maximize downforce, such as the fixed rear wing. Large vents behind the front wheels aid by reducing turbulence while also helping to cool the stock carbon-ceramic brakes. Other functional details include a new carbon front splitter, revised side strakes and a new rear diffuser to improve underbody air flow. Quad tailpipes complete the package, with Aston also pointing out that the exhaust system has been tweaked to deliver even more rumble under hard acceleration.

All those carbon fiber panels and components, incidentally, add up to about 158 pounds in weight-savings compared to a stock DB11.

Slip inside the DBS Superleggara’s cabin and you’re enveloped in a level of refinement befitting its more than $300,000 price tag. That starts with the use of specially selected Bridge of Weir leather, hides chosen for their lack of blemishes and rich textures. All metal switches, knobs and accent strips are real, pointed out Reichman, during a walkaround preview of the DBS. 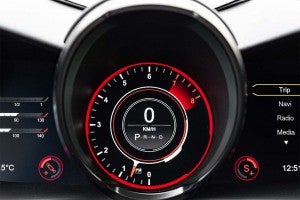 The gauge cluster is reconfigurable, with an analog tach and digital speedo anchored in a central binnacle. The steering wheel adopts an unusual hexagonal shape, flat both on top and bottom.

The heated and ventilated front seats are comfortable, yet firm and enveloping, with plenty of ways to adjust them. As you climb onboard you may notice something that gives you a sense of déjà vu, however. As with the DB11 and Vantage models before it, the DBS has borrowed its infotainment system from Mercedes-Benz, with which Aston has formed close bonds – it also derives its latest V-8s from the German maker’s AMG performance subsidiary.

From an interior tech standpoint that’s a mixed blessing. Aston gets a technical upgrade from what it previously offered – including Apple CarPlay,, Android Auto and onboard WiFi — though the COMAND system is a bit dated, especially compared to the UBX system that was introduced at CES earlier this year. As in Mercedes models, the 8-inch display can’t recognize touch, so it can take a newbie a bit of time to comprehend the COMAND system’s scroll wheel and touchpad controls.

Meanwhile, the latest Aston entry has plenty of advanced driver assistance systems, or ADAS, onboard, including adaptive cruise control with automated emergency braking, and lane keeping assistance. Mercifully, you can disable LKA, which we did immediately upon setting out through the tightly twisting roads through the Bavarian Alps. 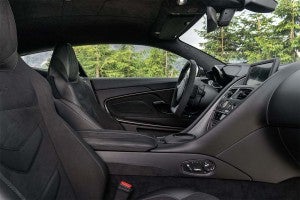 For all the technology onboard, what will clearly matter to DBS Superleggera buyers is what you’ll find under the hood. That 5.2-liter V-12 a full bar of boost compared to 0.7 bars on the DBR. There’s also an enhanced cooling system, an essential considering the heat the big engine can generate under hard driving. Lamentably, no manual option is available, an eight-speed automatic the only gearbox offered. On the plus side, it is lightning fast, especially in Sport and Sport+ driving modes, and there are paddle shifters for those who crave control. Unfortunately, Aston has had to limit torque upon launch – as much as 200 pounds in first gear. In GT mode you’ll get a maximum 463 pound-feet throughout the gear range, and even in Sport+ the engine’s full potential only comes on when you’ve reached third gear.

Even so the DBS can still punch you deep into your seat when you slam the throttle to the floor, and that’s not only from launch. You can rocket from 50 to 100 mph in just 4.2 seconds which, Aston officials are quick to point out, is a full second faster than what the Ferrari Superfast can manage.

Add the resonant roar of that engine, which comes on immediately and grows all the louder as your work your way through the gears. This, to our ears, was precisely the sound of music we want to hear when cruising through the mountains. On the other hand, when driven less aggressively, the cabin is surprisingly quiet, with minimal wind and tire noise. 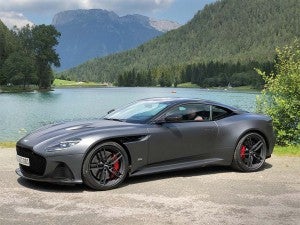 Most of the visual updates to the DBS, including its hood louvers, rear wing and strakes, are functional.

What makes the DBS doubly impressive is its road manners, especially on winding roads. Steering is sports car precise, point and shoot. The chassis, which is about 10% stiffer than the DB11’s, is all but impossible to upset, and what may be most telling is that we spent most of our day blasting through the mountains with the shocks set to GT, rather than Sport, mode.

Give at least some of that credit to the 21-inch wheels shod in Pirelli P-Zero tires. But Aston engineers also made some important modifications to the DB11, incorporating elements of both the DB11, with its isolated rear sub-frame and the damped front of the Vantage.

What you wind up with is a sleek and elegant coupe that can provide plenty of comfort for casual cruising, but work it hard and you discover the soul of a sports car.

The package doesn’t come cheap the base price for a 2019 Aston Martin DBS Superleggera set at $308,081 – including $3,086 in delivery fees. That’s about $7,000 less than the Ferrari 812 Superfast, but nearly $20,000 more than a McLaren 720S. In years past, we’d have expected the Aston to be an also ran in that lofty company. But the British brand has been building up quite a reputation since relaunching itself with the new DB11 and we expect quite a few GT shoppers will now – justifiably — give it a serious look. If that includes you, expect to see U.S. deliveries begin in December.