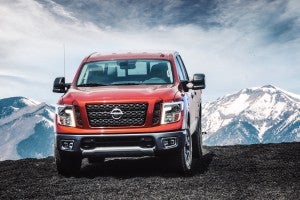 Everyone knows that the truck market is dominated by Chevrolet, Ford and Ram. It’s sort of a given.

But when all is said done Nissan also builds a very good full-size pickup truck, the Titan, which was updated for the 2018 model year. It is comfortable, maneuverable and rides well on everyday errands while offering a lot of the carrying capacity that has come to define the pickup truck over the past 100 years. It is also equipped with full complement of the latest technology.

On the outside the Nissan Titan is certainly a handsome with bold face and grille, tall cab and rear box that’s flanked by a pair of muscular wheel wells. Nissan’s focus on improved aerodynamics incorporates a front spoiler, roof and tailgate spoilers, front tow hook hole cover, underbody covers, rear tire wind deflectors and a seal between the cab and bed. The Titan also features an Active Grille Shutter, which helps reduce drag and LED headlights and taillights also are available as are puddle lamps.

The Titan is available in three different configurations, including a single, King and Crew Cab versions and we drove the Crew Cab with large and comfortable cabin and “zero-gravity” seats that help mitigate the stress that comes with a long period behind the steering wheel. 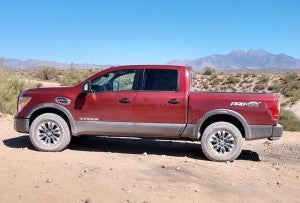 The Nissan Titan offers plenty of room for adults on the inside as well as a powerful V8 engine.

On the inside, the shift lever has been moved to the steering column, making the layout of the interior, which is also designed to put switches in easy reach of the driver’s seat. The Crew Cab interior offers multiple storage areas; along with an integrated foldout flat floor and other features include seven assist grips, console-side map pockets, and 12-volt and 110-volt power outlets. A Rockford Fosgate premium 12-speaker audio system is also available on the Titan.

For a pickup truck, the cabin on the Titan is quiet, which enhances the overall ride quality, thanks to the effort to reduce engine noise isolation and body sealing applied to the Titan this time around.

The 2018 Titan also carries on Nissan’s practice of offering a box outfitted for work. The five-foot box on the Titan Crew comes with four movable cleats for tying down have objects, a user-friendly tail gate and lockable storage as well as lighting to help load or unload in the dark before dawn or after dusk. It also is equipped step rails, making easier to get in and out of the cab or the bed.

The 2018 Titan half-ton, which Nissan has quite deliberately separated from its diesel-powered cousin, is powered by a 390-horsepower, 5.6-liter V8 gasoline engine that is matched to a 7-speed automatic transmission. The power was quite ample and the Titan did very well in passing situation out on the highway. The Titan is also available in a 4×2 and a 4×4 version, which is also equipped with a transfer case for more rugged going. 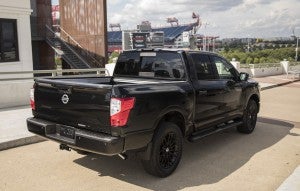 The Titan comes in several special editions, including the Midnight Edition with a black exterior and matching black wheels.

(Click Here for more about Nissan admitting to second round of emissions, mileage tampering.)

The fuel economy was 15 miles per gallon in the city and 21 mpg on the highway for a combined rating of 18, according to the EPA.

The 2018 half-ton is built on a separate chassis from the Titan XD. Its wheelbase at 139.8 inches is about a foot shorter than XD and its overall length of 228.1 inches is 14.7 inches shorter. On the road, the difference is very apparent as the gasoline version of the Titan is more nimble and impressively maneuverable even in tight corners.

In fact, when you take into account the Titan is a very large vehicle, the Titan’s maneuverability is one of its strongest features. The steering feel is quite nice as was feeling of the brakes, which did a very satisfactory job in stopping the truck under varying conditions. 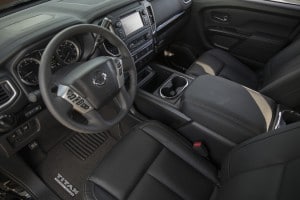 The interior of the Nissan Titan.

In keeping with the trend to model differentiation in the pickup segment The Titan Crew Cab is available in five well-equipped trim levels – S, SV, PRO-4X, SL and Platinum Reserve.

Ford, Chevrolet and even Ram, which used to be a Dodge, all have deep roots and legions of loyal fans because their trucks have been able to offer excellent, multi-faceted performance for a long time and help make the American truck is a force of nature.

(To see more about Nissan pushing its design boundaries with the GT-R50, Click Here.)

But that doesn’t mean that a challenger such as Nissan isn’t capable of building a very good pickup truck that can stand up to rugged competition offered by Detroit.