Hyundai is aiming the production version of the Santa Cruz at youthful “Urban Adventurers.”

Hyundai is locking down the final engineering and design details for its first-ever pickup truck and will launch it by late 2020 or 2021, TheDetroitBureau.com has learned.

Originally unveiled at the North American International Auto Show in January 2015, the Santa Cruz was originally seen as just as a styling exercise, but the response the concept received was solid enough to convince the Korean carmaker that it should consider taking it into production. Until now, however, Hyundai officials have been coy about whether that actually would happen and, if so, when.

“We just had a meeting to look at the design,” Kyung Soo “Ken” Lee, Hyundai Motor America’s CEO told TheDetroitBureau.com during a brief conversation about the truck on Tuesday evening. The plan is to “launch it in the U.S. market in 2020” or sometime soon afterwards, he said.

The truck will, like the concept, target “Urban Adventurers,” young buyers on a budget who nonetheless want distinctive styling and the ability to carry plenty of “stuff,” whatever their lifestyle. 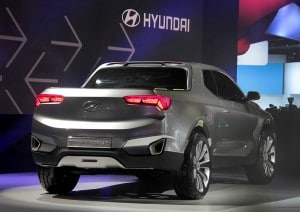 Lee was intentionally vague about details, for one thing, declining to confirm whether the production version of the Hyundai Santa Cruz will feature the same, unique bed extender that was a key part of the show car’s appeal. The unusual system worked something like a drawer, allowing the bed to slide back to add some extra length for large cargo. The tailgate could be operated normally, whether the bed was in its standard or extended position.

Read our review of the best Hyundai Extended Warranty options

During the Detroit Auto Show preview, Hyundai officials indicated that with the bed extended and the tailgate down it would offer enough space to carry a standard motorcycle.

Expect the Santa Cruz to also feature many of the concept’s functional accessories, such as tie-down cleats and movable rails.

That said, the automaker appears to be downplaying the idea that they will be bringing to market another work truck. The production version of the Santa Cruz appears more likely to be positioned as an alternative to today’s crossover-utility vehicles, or CUVs, with the added benefit of a bed for carrying the occasional large load. 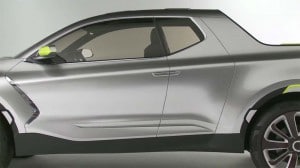 Like the Honda Ridgeline, the Hyundai pickup will use a crossover platform, rather than the classic body-on-frame approach. But, if Santa Cruz stays at all true to the original concept, it will be smaller than the current crop of midsize pickups, more in line with the compact trucks that were wildly popular in the 1970s and ‘80s.

Due to today’s safety standards, don’t expect seating in the bed, but there will be seating for five in the cabin. The Santa Cruz concept featured rear-hinged back doors that could only be opened along with the front doors. Hyundai officials won’t confirm what approach they will take with the production model.

In concept trim, the truck featured a 2.0-liter turbodiesel making 190 horsepower and 300 pound-feet of torque. Don’t expect that powertrain to make it into production, at least not in the U.S. Alternatives could see Hyundai tap one or more of the engines now being used in the compact Elantra sedan line, possibly the 1.6-liter turbo that churns out 201 hp and can make up to 195 lb-ft of torque. The bigger Sonata’s 2.4-liter naturally aspirated inline-four is another option, the sedan package making 185 hp and 178 lb-ft. 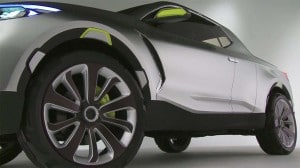 The Santa Cruz concept featured a torquey diesel not likely to go into the production model.

As for styling, the concept truck featured bulging wheel arches and aggressive character lines, as well as flying buttresses that were somewhat reminiscent of the first-generation Honda Ridgeline. Honda opted for a much more conventional truck design when it relaunched the Ridgeline after a brief hiatus. Hyundai insiders hint they will retain a more aggressive design more in line with today’s crossovers than a traditional pickup.

Like the compact pickups of the past, Hyundai hints it will target a youthful audience, primarily those under 30 who make up a relatively small share of today’s truck buyers. Those trucks appealed to youthful buyers on tight budgets and few would be surprised to see Hyundai position the Santa Cruz as the lowest price of entry for any pickup in the U.S. market. Currently, that title goes to the aging Nissan Frontier, which starts at just over $18,000.

(Could Ford challenge the Hyundai Santa Cruz with a pickup smaller than the upcoming Ranger? Click Here to find out.)