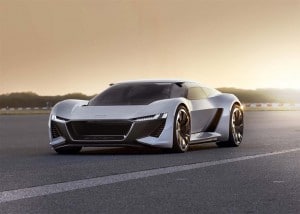 The Audi PB 18 uses three motors, two of them in the rear, powered by a solid-state battery pack.

Amidst a sea of classic cars, Audi launched something new and decidedly different on Friday, but the PB 18 e-tron had at least one thing in common with the racecars gathered for the annual Rolex Monterey Motorsports Reunion: blinding speed.

Driven by legendary Audi race driver Allan McNish, the eagerly expected Audi supercar is one of an assortment of high-performance models making their debut over the long weekend on the Monterey Peninsula where things are building up towards the annual Pebble Beach Concours d’Elegance on Sunday.

Influenced by Audi’s endurance racing program, as well as the R8 e-tron concept first shown in 2009, the new PB 18 e-tron is a two-seat supercar that sets the stage for the German automaker’s upcoming push into electrification. That begins later this year with the debate of a new SUV that offers an all-electric alternative to Audi’s more conventional Q5 ute.

The question many are now asking is whether the Volkswagen Group subsidiary will translates the PB 18 concept into a production model, as well, something that could give a serious challenge to the second-generation Roadster that Tesla is developing. 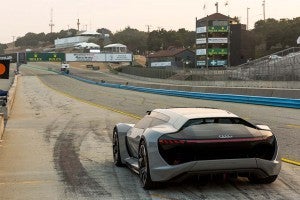 The Audi PB 18 e-tron sits on the side of the Laguna Seca track after its debut.

The name of Audi’s newest concept signifies its debut at Pebble Beach in 2018. The automaker will likely be forgiven that lack of creativity considering the performance claimed for the PB 18. It relies on three electric motors, one making a maximum 150 kilowatts, or 201 horsepower, up front, the two motors in the rear – one driving each wheel – turn out a combined 450 kW, or 603 hp. Pulling together, they turn out a maximum 500 kW, or 671 hp, though the driver can briefly go into “boost” mode to get an extra 50 kW, or 67 hp.

What really matters is the maximum 830 newton-meters of torque, or 612 pound-feet, that the powertrain can punch out. And, unlike all the gas-powered race cars on hand for the Motorsports Reunion, that wheel-spinning torque comes on all but instantaneously, so the PB 18 e-tron, Audi claims, will be able to hit 60 mph in about 2 seconds, “a speed that differs only marginally from its current LMPA endurance racing prototype. 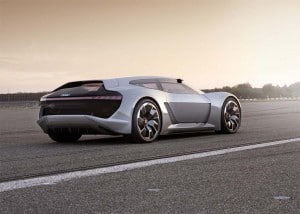 Much of the technology used in the PB 18 e-tron would be available today, but not all.

As impressive as that might be, there’s more that’s noteworthy about the Audi concept, in particular, its use of solid-state batteries, rather than current lithium-ion technology. They’re significantly smaller and lighter and, the automaker claims, allows it to hold the overall weight of the PB 18 to just 3,417 pounds. At the same time, they provide enough energy to travel 310 miles per charge under less aggressive driving, while completely recharging in just 15 minutes using new, 800-volt charging technology.

(Click Here for details about Audi rolling out all-new 2019 Q3.)

While much of the PB 18 appears to be using real-world technology available now, should Audi choose to take the concept into production, the solid-state technology is not among that list. It remains a matter of debate as to when, indeed if, that battery breakthrough will be ready for prime time. Using lithium-ion cells would force Audi to consider a compromise balancing weight, performance and range. 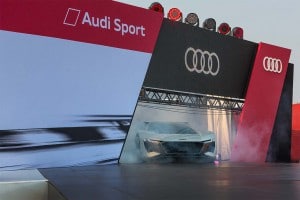 The Audi PB 18 e-tron makes its debut at the Rolex Monterey Motorsports Reunion at Laguna Seca.

Inside, the cockpit is set up more for racing than street use. And while the PB 18 is officially a two-seater, the passenger seat can be removed, the driver’s seat sliding to the center for a more optimal position on track.

(For a first look at the new Audi Q8, Click Here.)

Audi isn’t talking production. Its electric vehicle aspirations are, for the moment, focused on the new SUV it is getting ready to launch. But with other manufacturers, starting with Tesla and Porsche, looking at ways to electrify performance, few would be surprised if a battery-powered hypercar might show up in the Audi line-up at some point during the coming decade.