Tesla Faces the “Big Short” Ahead of Q2 Loss Announcement

Worries grow about carmaker’s finances, but brokerage tells short-sellers to put up or shut up.

Tesla CEO Elon Musk will be tested during the 2nd half of 2018 to prove Tesla can be profitable.

Just days before Tesla is expected to announce another big loss for the second quarter, the money manager made famous by the film, “The Big Short” is raising serious questions about the carmaker’s future.

And Steve Eisman, who became a financial legend by calling out the impending collapse of the housing bubble before the Great Recession, isn’t alone. A growing number of analysts and investors are souring on Tesla stock, one key brokerage warning that the company could need to raise $10 billion by 2020. Tesla shares have been riding a roller-coaster, ranging from a low of $244.59 to a high of $373.73 this year. And that’s leading at lead one big brokerage to raise margin requirements for those trying to short Tesla shares.

“Elon Musk is a very, very smart man, but there are a lot of smart people in this world and you’ve got to execute. He’s got execution problems,” Neuberger Berman Group’s Eisman said in a Bloomberg Television interview. “He’s nowhere in autonomous driving, as far as I can tell, and big competition is coming in his space next year.”

Eisman became a Wall Street legend when, ahead of the Great Recession, he called for the housing bubble to burst, his contrarian position anchoring the film, “The Big Short,” with Eisman portrayed by actor Steve Carell. While even the best investors and fund managers can fail themselves, Eisman’s track record has generated waves as he turns his gaze to Tesla.

(Tesla demands refunds from suppliers to help it claw back into black. Click Here for the story.) 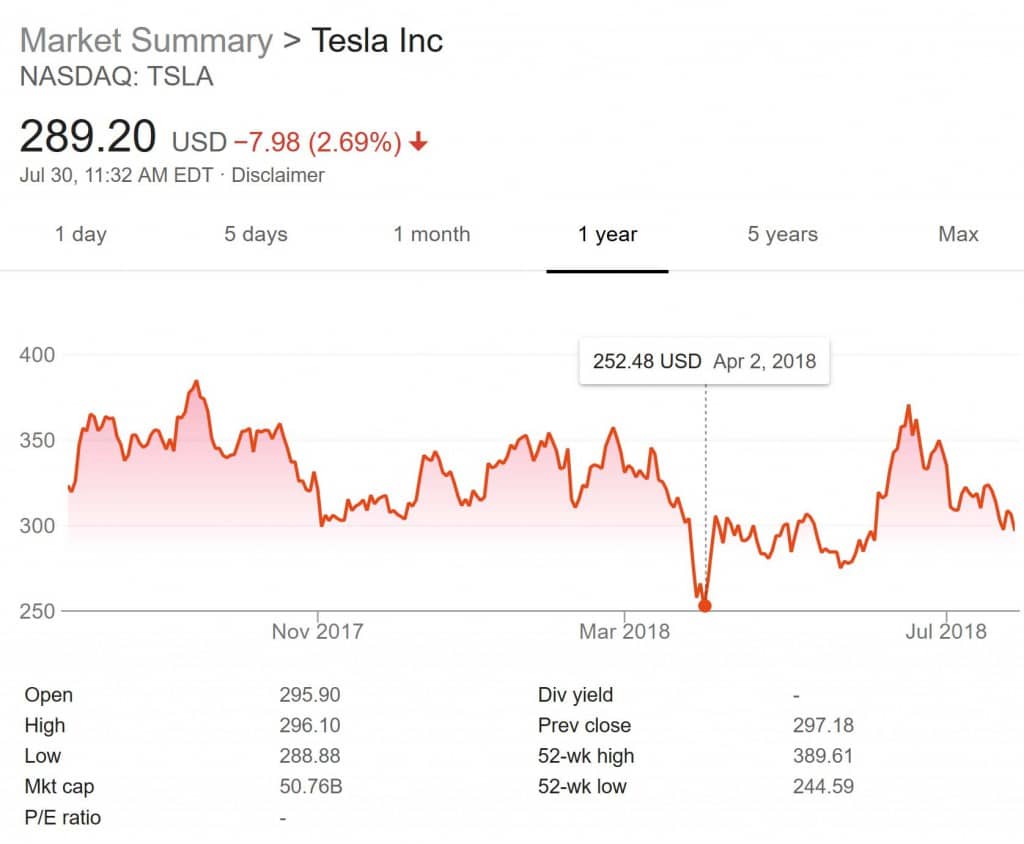 During his interview, Eisman also raised concerns about the “enormous number of executives” who have either quit or been pushed out of Tesla over the last few years. And he isn’t alone Jim Chanos, another well-respected investor calls the high management turnover “stunning,” and compares it to what has happened to either high-flying companies, such as Enron, that subsequently crashed and burned.

A recent study of dozens of analysts who follow the California battery carmaker found that almost a third rated Tesla stock a “Sell,” another third rating TSLA shares a tepid “Hold.” The company has seen a sharp rise in the number of short-sellers, including Eisman and Chanos. But betting against the company has proved risky, especially for those without a solid backup in their portfolios. Since mid-June, shares have bounced as high as $370.83 and as low as $297.18. But one day’s low can be followed by the next day’s high.

That has led some brokerages to tell Tesla short-sellers to put up or shut up. Starting tomorrow, online firm Interactive Brokers Group will raise margin requirements for clients making either long or short bets to TSLA stock – from 25% to 30% on regular accounts, and from 15% to 20% on margin accounts.

There would seem to be good reason considering short-sellers are off by $469 million for the year. Nonetheless, an unusually high 35.4 million shares in the automaker – nearly 28% of the company’s total – are currently being sold short.

Tesla Must prove it not only can keep boosting Model 3 production but that it will improve quality, as well.

Part of the concern centers around Tesla’s hefty cash burn, which topped $1 billion during three of the last four quarters. Then there are the losses the company has continued running up, the first quarter setting an all-time record, and the second expected to also leave the company deep in the red. Investors are also questioning whether the carmaker has finally pulled itself out of what CEO Elon Musk has called “production hell” at its Fremont, California assembly plant.

During the last week of June, Musk announced, Tesla hit its critical goal of producing 5,000 Model 3 sedans in a week. But it is far from certain it can maintain that pace, despite a promise to reach 6,000 by the end of this month. And some analysts question whether Tesla is sacrificing quality in the push for volume.

In a response to a question by TheDetroitBureau.com this weekend, Dave Sargent, J.D. Power and Associate’s head of automotive research, noted that while Tesla customers have a high level of satisfaction with their vehicles, they also have experienced an unusually high level of quality problems.

Potentially even more concerning, new orders appear to be falling short of the jump in production. A Tesla spokesman told TheDetroitBureau.com that the company expects to see orders rise as it adds more variants of the Model 3, but it could prove disastrous if that doesn’t happen.

Musk has promised that Tesla will deliver a profit for the second half of 2018, while also becoming cashflow positive. Not everyone is ready to buy that. Wall Street powerhouse Goldman Sachs is one of several key players predicting Tesla will need to raise as much as $10 billion by 2020 to remain afloat.

It’s possible that figure might be overly bearish, acknowledged Goldman analyst David Tamberino. But, in a note to investors, he wrote, “We model cash needs under a scenario where the company sustainably produces 10k/week Model 3 vehicles in 2020 — and moves forward with the Model Y and plant capacity in China. Under this scenario, Tesla capital needs would be half of our estimate,” or a still hefty $5 billion.

Such concerns have led UBS to warn that the carmaker’s stock could tumble by as much as 30% over the next 12 months. “The market should not ignore fundamental headwinds that persist with regards to (Tesla),” wrote UBS analyst Colin Latngin.

Perhaps, but as short-sellers working with Interactive Brokers Group are about to learn, betting against Tesla is a big risk. Even at the lowest levels the stock has traded at in recent months, it carries far greater multiples than almost any other auto manufacturer could dream of. Ford barely clawed back above $10 a share on Monday morning after being hammered by the weak earnings it announced last week.

While Tesla may have plenty of analysts walking back, and plenty of short-sellers betting against it, it could yet surprise Wall Street by meeting the bold, second-half predictions laid out by its CEO.