Genesis, the upstart Korean luxury brand, has pulled off another surprise, this time landing the top spot in the 2018 J.D. Power APEAL study, surpassing such traditional highline brands as Porsche, Mercedes-Benz, BMW and Lexus.

It’s the latest in a series of coups by Genesis, which was spun off by Hyundai just two years ago. And it comes barely a month after the Korean marque also landed in the top spot on Power’s widely followed In initial Quality Survey. But there were some other surprises in the APEAL report which measures how well individual brands and models are satisfying their owners. Mainstream brands, notably including some Detroit marques, are rapidly gaining ground on the luxury badges that have traditionally led in customer satisfaction.

But the industry, as a whole, achieved record levels in the 2018 APEAL study – the name short for “Automotive Performance, Execution and Layout” – the second year in a row that has happened.

“It’s down to a number of factors,” explained Dave Sargent, Powers’ vice president of automotive research, the survey showing that “new vehicles are (uniformly) better than the vehicles they replace.”

(There were big surprises in the JD Power Initial Quality Survey, too. Click Here to check them out.)

Genesis managed to nudge traditional APEAL leader Porsche aside by a single point, 884 to 883 – the higher the number the more satisfied the owner. They were followed, in order, by BMW, Lincoln, Mercedes-Benz and Audi.

With their higher prices, said Sargent, it’s no surprise that luxury brands can APEAL or, if you prefer, appeal to buyers. But he also stressed that even mainstream brands are following suit, adding fancy infotainment systems, leather seats, advanced driver assistance systems and other features traditionally not available in the mass market. As a result, the luxury marques are facing new challenges.

“You don’t have to buy an expensive luxury car these days to get a great and satisfying vehicle,” said Sargent.

Another surprise: the relatively mediocre performance by the two other Korean brands, Kia and Hyundai.

“They’ve been very effective about getting their quality right,” Sargent said, pointing to their industry-leading numbers in the IQS report measuring the number of problems a brand’s vehicles experience during the first 90 days of ownership. “But they’ve taken fewer risks” adding new features that could also boost APEAL scores and “are in danger of making reliable but boring vehicles.”

The improvements were seen just about everywhere in the 2018 APEAL study. Indeed, while Mitsubishi came in dead last, with a score of 783 – the industry average was 820 – the struggling Japanese automaker was nonetheless the brand posting the biggest improvement, year-over-year gaining 33 points. Dodge was up by 29 and its sibling Jeep brand jumped by 26 points.

The study reveals how automakers have been focusing on customer satisfaction as they introduce new models, said Sargent, routinely adding a wide mix of new features, whether luxury or mainstream products.

Ford won four individual model awards, more than any other manufacturer, with new versions of its Expedition and Lincoln Continental, along with significant updates of the Mustang and F-150.

General Motors had three model winners, as did Volkswagen and BMW, while Honda and Hyundai had two. Fiat and Nissan each had one segment winner.

Here’s a closer look at the 2018 APEAL study results, starting with the individual segment winners: 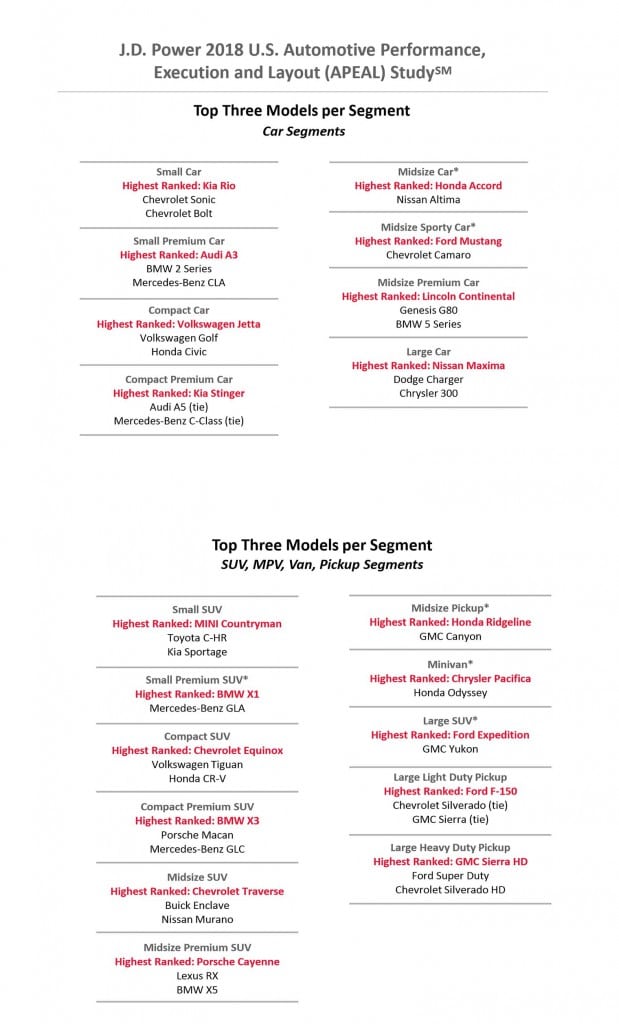 As for how individual brands rank: 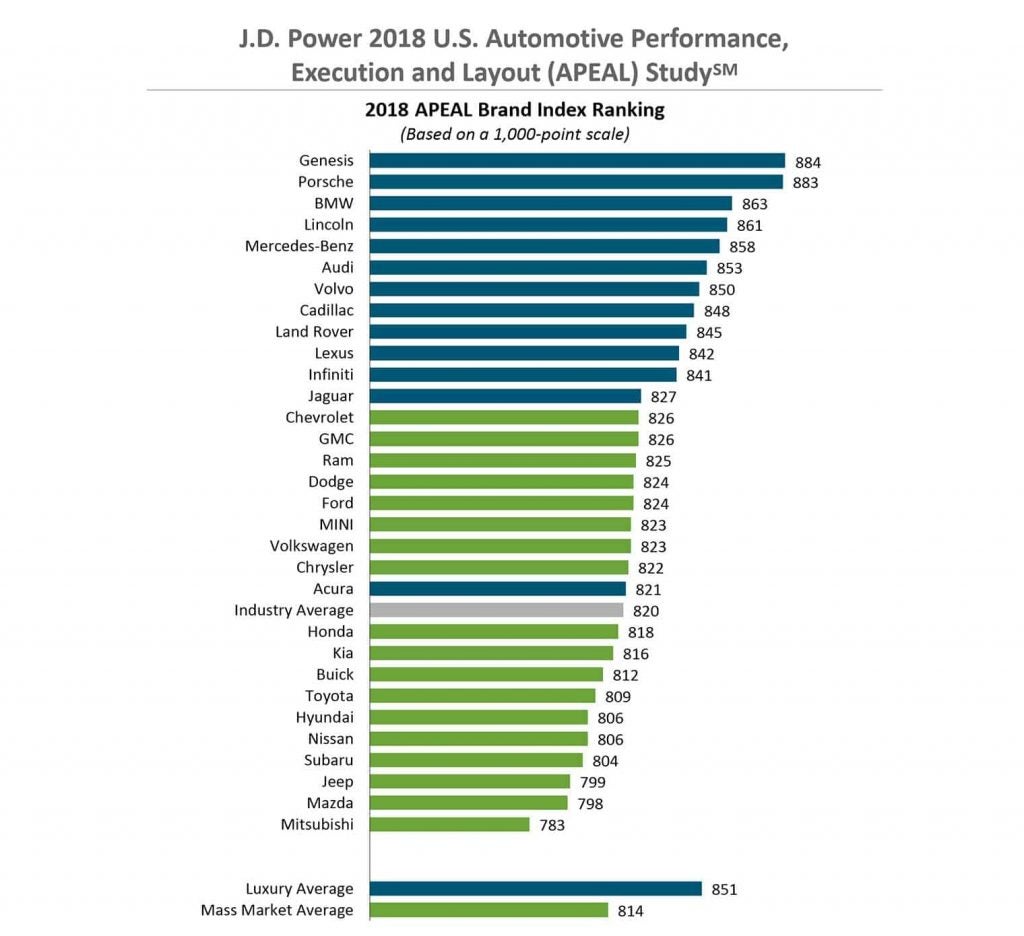