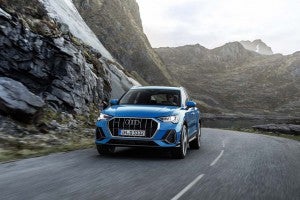 Audi has a new entry for the small luxury utility market that is growing by leaps and bounds in the U.S.: the 2019 Q3.

Audi has been moving on two critical trends in the luxury car market, both moving both down-market and expanding its presence in the fast-growing utility vehicle market. It scored with the original Q3 that combined both trends into one package and, for 2019, it’s hoping to hammer another one out of the park with the second-generation of its compact crossover.

The Q3 comes along at a busy time for Audi which, among other things, is also launching a new range-topper, the big Q8 utility vehicle. For the U.S., the Q3 is the smallest crossover it offers, and the all-new version comes just four years after the North American debut of the original.

The new model grows in every dimension, both outside and in, while also adopting a bolder, more muscular appearance that bears the clear stamp of Marc Lichte, Audi’s design director who came onboard a few years back, promising to shake up the brand’s styling language. But what may particularly appeal to the generally younger buyers is that the 2019 Audi Q3 features a suite of new, high-tech features.

That covers everything from the large virtual cockpit system to the range of new advanced driver assistance systems. There’s also plenty new in terms of its infotainment system which adds Apple CarPlay and Android Auto while subtracting one of the previous Q3’s screens. 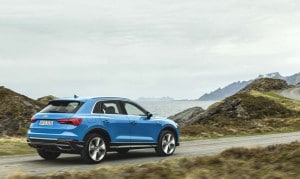 The new Audi Q3 is expected to hit U.S. shores later in the fall, helping fill a gap in the brand's line-up.

(Audi’s Stadler wants out of jail during investigation. Click Here for the story.)

Visually, the second-generation Q3 won’t come as a big surprise. It retains the basic shape, albeit adopting sharper lines that give it a bolder and more muscular appearance. Many of the new details are, not surprisingly, borrowed from the new Audi Q8 flagship crossover, though it’s not a case of simply putting the design on a copier and hitting the 70% reduction setting. Among the shared touches are flared wheel arches and the wide grille with vertical slats. The taillights are distinct to the Q3, flaring off the tailgate into the rear quarter-panels.

Pull out your tape measure and you’ll discover that the new Q3 has grown to a full 14.7 feet, nose-to-tail, with the wheelbase stretched a full three inches. It’s now 6.1 feet in width and 5.2 feet in height. Much of that translates into added space for passengers, notably including those in the rear who also get the ability to slide their seats fore and after by nearly 6 inches. There’s also more cargo space, a total of 23.8 cubic feet with the back seats up, and 53.9 cf with them folded down. 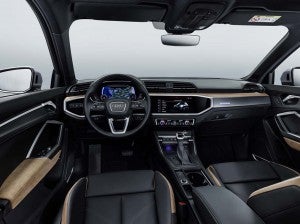 The Q3 features a mix of top-of-the-line infotainment with simple controls to appeal to younger buyers.

The cabin is one area Lichte has been taking some liberties with since coming onboard in 2013. Audis have been known for their benchmark interiors and tinkering with its familiar cues could be risky, but Lichte also knows that without some fresh ideas the brand’s cabins could wind up looking like dated clichés.

The basic layout is familiar, here enveloping the gauge cluster and touchscreen display in a chrome frame that creates a distinctly driver-oriented feel. That optional virtual cockpit uses a 12.3-inch electronic display rather than conventional gauges and allows for more extensive customization than with conventional mechanical systems. The system can be controlled by buttons on the steering wheel, with some functions redundantly operated  by the MMI, or Multimedia Interface that runs the infotainment system.

(Click Here for details about Audi’s new partnership with Hyundai.)

Here, Audi has chosen to consolidate the old A3’s twin screens into one, though it is large and easy to read, and it picks up many features from bigger and more expensive Audi offerings. Navigation, which includes Google Earth functionality, is optional, however. 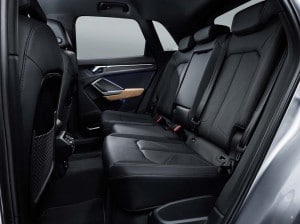 The Q3 was designed to offer the maximum amount of room in the rear seat, allowing seating for five.

Lichte is a fan of minimalism, especially when it comes to knobs and buttons yet, with the switch to a single display the Q3 now gets numerous, more traditional controls for its climate control system.

Audi isn’t yet revealing specific details on the powertrain that will be coming to the U.S., though it’s widely expected to get a turbo-2.0-liter making 230 horsepower and 258 pound-feet of torque. That inline-four will be paired with a dual-clutch manumatic and will drive all four wheels using the familiar Quattro system.

It’s possible a few other options could come across the Atlantic, including a more fuel-efficient 1.5-liter gas engine. In the wake of parent Volkswagen’s diesel emissions crisis, it’s unlikely an American version of the European oil-burner will follow, as well, but an upgraded SQ3 seems likely, along with a front-drive package.

(For a first look at the new Audi Q8, Click Here.)

The 2019 Audi Q3 is expected to reach European showrooms late this year, but the American model won’t arrive until early next year. Pricing will be announced closer to that date.