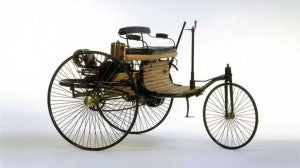 What was then DaimlerChrysler crafted 25 Patent Motorwagen replicas in 2001-2002.

Let’s face it: today’s cars are complicated. With their infotainment and advance driver assistance systems, heated and cooled massaging seats and computer-controlled turbo and hybrid powertrains, it can all get just a little overwhelming, especially if you’re a do-it-yourself sort of driver.

So, if you’re someone who wants to tinker on something reasonably simple, we just might have the perfect car for you. Just be aware that spare parts aren’t going to be easy to find.

Behold the 1886 Benz Patent Motorwagen, the three-wheeler most historians credit as being the first true automobile. Okay, what you’re looking at is an incredibly accurate 2002 replica, one of a handful that what was then known as DaimlerChrysler AG produced back in 2002. It’s up for sale, though the automaker’s classic car division has yet to reveal the price.

We’re expecting it will go for a bit more than the original 600 Imperial German marks – about US$150 at the time and around $4,100, adjusted for inflation, today. 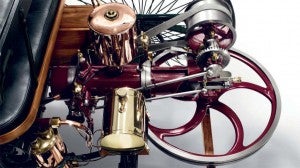 Like the original, the replica's one-cylinder engine makes just 0.75 hp and it tops out at 10 mph.

But consider the history behind it. Developed in what would today be known as a garage, Carl Benz applied for a patent on January 29, 1886, and received on 10 months later, appropriately naming his vehicle the Benz Patent Motorwagen.

Actually, not much might have happened if it weren’t for the world’s first woman driver. Carl’s wife Bertha came from an affluent family and provided the cash for Benz to create the first automotive company, Rheinishe Gasmotorenfabrik Benz & Cie. She also managed to slip out of the house one early morning, taking along their two young children for a visit to her family. Her trip proved to be quite an adventure, among other things requiring a stop at a pharmacist for some fuel and another to make some repairs with Bertha’s hairpin.

Bertha also proved to have a reasonable sense of engineering, convincing her husband to add another gear to the primitive transmission to make it possible to climb hills more readily.

Despite its flaws, the Patent Motorwagen created a sensation and literally set in motion a revolution that would soon sweep across the world.

The original has been sitting in the Deutsches Museum since 1906, but DaimlerChrysler decided to celebrate the car’s 125th anniversary by producing 25 remarkably detailed replicas. In 2002 they were distributed for display at Mercedes plants and offices. Now, for reasons unexplained, the company wants to see one of those replicars off.

(Mercedes tooling up French plant to take on Tesla Model 3. Click Here for the story.) 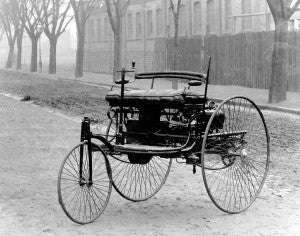 The original Benz wagen received its patent from the German government in November 1886.

The 2002 model is apparently in much better shape than the original, but it also matches the first Benz’s specs. And it’s definitely no AMG model. With its single-cylinder engine using a wick-like carburetor, it manages to produce a mere 075 horsepower and can top out – apparently with a good tail wind – at just 10 mph. It isn’t entirely without frills, however, its single bench seat finished in leather.

You can check out the Benz Patent Motorwagen replica – and other rare Mercedes-Benz models at the automaker’s classic car site, All-Time Stars.