Byton Taking Second Byte at the Apple with New Concept

New model predicted to be available in 2021. 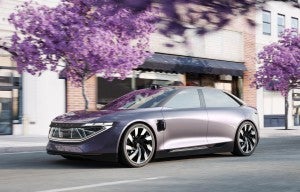 With a newly gained $500 million in its pocket, electric carmaker Byton rolled out the new K-Byte, an autonomous electric vehicle concept, at CES Shanghai.

The K-Byte is the company’s second concept. At CES 2018, it debuted its first-ever vehicle, a crossover-style EV that now gets the moniker M-Byte.

The new K-Byte would seem to be just another of a slew of newly minted autonomous battery-electric concepts that have been unveiled in the last 12 months, but this one is a little different. Byton officials claim it will be capable of Level 4 autonomy when it hits the road in 2021.

In layman’s terms, the K-Byte could could take a person from point A to B without ever requiring that they take or even be ready to take control of the sedan — although Tesla CEO Elon Musk promised yesterday that his vehicles would be capable of Level 5 autonomy by the end of this year. 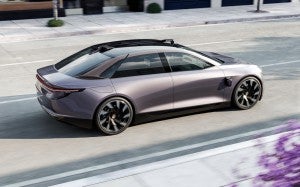 The new K-Byte concept will begin road testing in 2020 and deliveries are expected in 2021.

Byton’s self-driving tech will be provided by Aurora Innovation, a company started by the former head of Google’s autonomous car program, Chris Urmson. With partnerships with Volkswagen and Hyundai already in place, it would appear that Byton is well positioned to make up a lot of ground fast.

Byton didn’t detail powertrain details for the K-Byte, but it shares the same platform as the M-Byte concept. Theoretically, that means the K-Byte could be had in a rear-drive version using a single electric motor providing 268 horsepower and 295 pound-feet of torque, with a 71-kWh battery offering 248.5 miles of range.

(Click Here for more about VW and Hyundai teaming up with Google former autonomous guru.)

The second option is an all-wheel-drive, dual-motor version will produce 469 horsepower and 523 pound-feet of torque, with a 95-kWh battery good for 323 miles on a single charge. 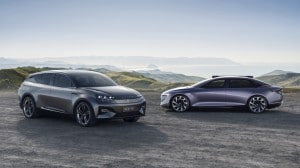 The K-Byte, which is expected to begin prototype testing on roads by 2020 with deliveries beginning the following year. No pricing was offered for either. It appears the “Byte” nomenclature is here to stay since it apparently gives it a certain feel, according to Byton officials.

(Study sees 21 million autonomous vehicles on the road by 2035. Click Here for the latest.)

“Following from our first model, the Byton M-Byte Concept, the K-Byte Concept represents a breakthrough in the design of smart connected vehicles. It changes the design language of traditional cars, delivering a perfect blend of elegance, style, luxury, and sportiness, and introducing new design aesthetics in the age of shared mobility and autonomous driving.”