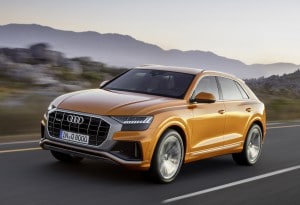 Audi's new 2019 Q8 sport-utility is lower and wider than the Q7 giving it a more coupe-like feel.

Audi revealed a brand-new luxury SUV called the Q8 in the home of specialized bigger and better sport-utility vehicles: China.

The 2019 Audi Q8 bowed at the Audi Brand Summit in Shenzhen, China. The new ute aims to attract customers moving from passenger cars into bigger vehicles. The five-passenger Q8, which was originally a concept shown in Detroit in 2017, is lower and wider than the Q7 giving it a more car-like ride and feel.

Unsurprisingly, the new Q8 is the new basis of the company’s exterior and interior styling language, Audi notes. On the exterior, the coupe-like feel of the ute is accentuated by the sloping roofline that ends in gently inclined D-pillars and the pronounced wheel arches pay homage to the vehicle’s quattro DNA.

A light strip connects the tailights at the rear of the vehicle, including a black surface under this strip, which is another nod to its quattro heritage. Other exterior features include an octagonally shaped grille and large air inlets. 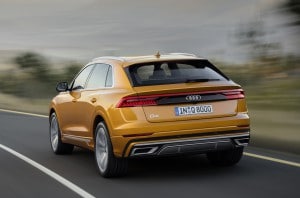 The new Q8 hits dealer showrooms in the U.S. this fall.

On the interior, Audi offers room for five with plenty of cargo space. However, the centerpiece of the new ute is the brand’s overhauled its infotainment operating system, called MMI. The system features haptic and acoustic feedback on the touchscreen.

The system can be personalized using configurable and movable “favorites” buttons. Natural-language control turns the Q8 into a more intelligent travel assistant. Drivers can speak requests such as, “I’m hungry” to which the Q8 will suggest nearby restaurants.

(Click Here for more about Audi bringing Sport-y back with new RS 5 Sport Back.) 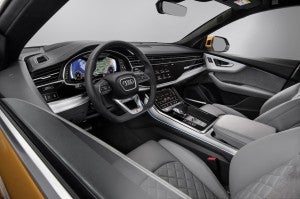 The interior of the new Q8 features a new touchscreen with haptic feedback.

With standard quattro, aka four-wheel-drive, the Audi also gets a new mild-hybrid system, or MHEV, using stop-start technology to help the ute save on fuel. The 48-volt primary electrical system supports the TFSI engine and functions as the main vehicle electrical system.

The Q8 comes standard equipped with an adaptive damping suspension. Available adaptive air suspension enables the various suspension and damping combinations that make up the Audi drive select modes and makes the Q8 a capable choice for off-road terrain.

Audi’s timing on the new ute is perfect as consumers are moving into luxury sport-utes and crossovers in ever-increasing numbers. China is one of those markets snapping up new utes. It may not be too long before a specialized model specifically for the Chinese market shows up as well.

(To see how Audi was forced to deal with diesel emission problems, Click Here.)

The Audi Q8 is expected to hit U.S. dealerships in late 2018, according to the maker, which did not reveal pricing.