Volkswagen Brings a Slew of Concepts to US Version of Wörthersee 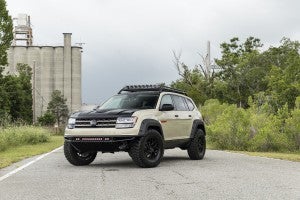 Tanner Foust's SEMA Atlas concept may be the star of VW show of the five concepts touring the U.S. this summer.

Every year, thousands of crazed Volkswagen fan flock to the Wörthersee VW meet in Europe. It features a slew of tricked out and tweaked up cars from across the decades as well as few sneak peeks at what the company is working on.

However, American VW fans with travel budget that doesn’t include a trans-Atlantic flight have an option: SoWo: The European Experience. The show was held last weekend in Savannah, Georgia.

More importantly, it seems VW likes a good party and rolled up with some modified versions of the Jetta, Golf, Arteon, Atlas and Tiguan. Although very impressive, it’s highly unlikely that any of them will follow in the path of the Golf TCR shown in Europe, which is likely to find its way to dealerships relatively soon.

Here’s what was on display:

2018 VW Atlas Tanner Foust SEMA Concept: A creation of former Top Gear USA host and rallycross driver Tanner Foust, the customized Atlas features huge, knobby off-road tires on black wheels, massive bolt-on fender flares and lower body panel cladding to give the vehicle an extreme off-road look. To complete the “overlander” look, the ute features a cargo rack fitted with off-road lights, a ladder on the rear hatch to get to gear on the top so there’s more room inside for passenger.Minimal changes to the interior include plaid inserts in the seats that are reminiscent of Volkswagen GTI heritage and also reflect on Tanner’s childhood in Scotland. 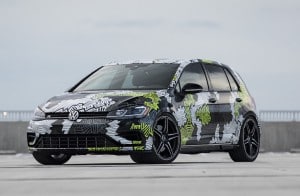 The Golf R Abstract concept takes its name from them vinyl wrap that covers the car.

(VW brand bailing out of Paris Motor Show. Click Here for the story.)

2018 VW Golf R Abstract Concept: The Golf R Abstract is covered custom vinyl wrap to give it that signature look, but it’s enhanced with a lower profile and 20-inch wheels that create a unique look. That exterior styling gets interior and sound enhancements to round out the look including a new exhaust system, while inside the new look centers on a real carbon fiber steering wheel with blue stitching on black leather.

2019 VW Jetta R-Line SoCal: This model celebrates the seventh-generation Jetta with inspiration from the Mk2 Jetta, the body graphics give a nod to the past while drawing attention to the strong vehicle design. Other visual highlights include fluorescent yellow mirror caps, a gloss black roof with geodesic fluorescent yellow design, and body-color wheels with yellow accents. SoCal-based wheel and automotive design company fifteen52 developed the overall concept, giving the car clean lines but with an aggressive stance. 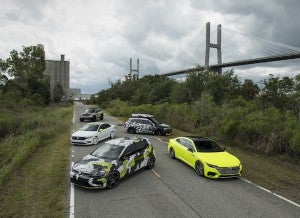 (To read about our driving impressions of the 2019 VW Jetta, Click Here.)

For VW mavens who couldn’t make the trek to the most haunted city in the United States, there is good news. These vehicles will be touring the U.S. throughout the summer. They will stop in Holland, Michigan June 22–23 next followed by stops in New Jersey, Vermont, Pennsylvania, California and a final stop in early September in Oregon.