They’re expected to flood our roads by the millions over the next decade, and Congress is currently working on legislation that would expand testing on public roads – but a new AAA study reveals that the American public is, if anything, growing more concerned about the safety of autonomous and fully driverless vehicles.

Nearly two-thirds of U.S. drivers would be “afraid” to ride in one today, up from 63% when the AAA last polled American motorists in late 2017. The decline in confidence appears to follow an array of incidents involving prototype autonomous vehicles, including the first-known fatal crash near Phoenix when a hands-free SUV being tested by Uber slammed into a pedestrian.

“Despite their potential to make our roads safer in the long run, consumers have high expectations for safety,” said Greg Brannon, AAA’s director of Automotive Engineering and Industry Relations. “Our results show that any incident involving an autonomous vehicle is likely to shake consumer trust, which is a critical component to the widespread acceptance of autonomous vehicles.”

Virtually every automaker – as well as tech firms like Waymo, ride-sharing companies like Uber, and a number of automotive suppliers – is working on self-driving technology today. These range from systems that assist a driver but still require hands on the wheel to technology that simply requires the motorist to be ready to retake control in an emergency, as was supposed to be the case with the Uber-operated SUV. Even more advanced vehicles will need no driver in the car at all, and Waymo, the Google spin-off has received a permit to use this technology for a ride-sharing service launching later this year.

But, if the AAA study is accurate, the vast majority of motorists may steer clear of these technologies. Only one in five, or 20%, said they would trust such vehicles, with 7% unsure. Women are particularly skeptical, 83% saying they are afraid of self-driving technologies compared to a still-majority 63% of the men the travel and road service polled.

What may be particular telling is the turnaround in support among Millennials. They are, of course, a generation that has grown up with digital technology always a part of their daily lives and, when last surveyed in late 2017, a slight majority, or 51%, said they would be comfortable riding in a self-driving vehicle. In the latest AAA survey, however, nearly two-thirds, or 64%, said they would be “afraid” of going for a ride. That, according to the service, represented the largest shift by any generational group it polled.

And it’s not just getting into a self-driving vehicle that worries Americans. Even while walking or riding a bike, 63% of those surveyed said they would feel less safe knowing they must share the road with self-driving vehicles. Again, women show the greatest concerns, 70% saying they would “feel less safe,” compared to 55% of men. Baby Boomers, by a 71% majority, are also in the nay category, compared to 68% of Gen X-ers and 48% of Millennials. 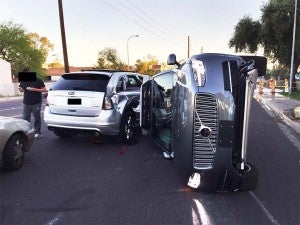 While police blamed the other driver for a recent Phoenix crash with an Uber vehicle, the incident still raised concerns about the ability of the autonomous technology to steer clear of trouble.

The AAA study is in line with other, recent polls finding that most Americans are skeptical, at best, about autonomous and fully driverless technology and, in many cases, outright afraid. What should be more worrisome for proponents of a self-driving future is that after showing some increased acceptance last year, the polls are rapidly turning south.

That appears to reflect the recent reports about crashes involving autonomous and even more advanced vehicles. The fatal Uber crash was just one of the incidents. A Waymo vehicle was involved in another collision recently. And though that was blamed on the other driver running a light, it raises concerns about whether self-driving vehicles can live up to the promise of being able to steer clear of crashes even when the other, human driver makes a mistake.

The AAA poll was conducted in April between April 5 and 8, 2018 and surveyed 1,014 randomly selected American motorists, yielding a margin of error of 4 percent. So, even in the worst case, the numbers reveal strong fears about self-driving technology.

But there is a curious footnote to the AAA study: despite their concerns about hands-free vehicles, slightly more than half, or about 55%, of the U.S. drivers polled say they want semi-autonomous technologies in their next vehicle.

In most cases, that technology still requires a driver to keep their hands on the wheel. Such systems are rapidly coming to market. Nissan’s ProPilot Assist, for example, helps a driver stay precisely in the center of their lane with less steering effort. BMW’s Traffic Jam Assist can operate with minimal driver assistance on crowded freeways. And Cadillac’s Super Cruise can allow limited hands-off operation on well-marked freeways.

Perhaps the best-known version of these systems, however, is Tesla’s Autopilot. But it has been linked to several recent crashes, including a fatal one involving a Tesla Model X SUV in California, that have triggered federal safety probes. And AAA is one of several groups now raising concerns about the very name, Autopilot, asserting that it may encourage drivers to think their Tesla vehicles can handle more situations hands-free than it is actually designed to do. They are asking federal authorities to press Tesla to switch to a different name for the system.