Pass the Bubbly? Rolls-Royce Cullinan Promises a Luxury Ride Even on the Roughest Trails

British marque officially introduces its first off-roader since the days of Lawrence of Arabia. 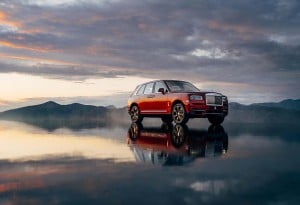 The slogan for the new Rolls-Royce Cullinan hints at its capabilities: "Effortless, Everywhere."

Don’t call it an SUV. Rolls-Royce prefers to refer to its all-new Cullinan as “an all-terrain, high-bodied car that makes the idea of authentic, luxury off-road travel a reality for the first time.”

Whether you stick with SUV, borrow “Sport Activity Vehicle from Rolls’ parent BMW, or find some other, more elegant term, the Cullinan really does appear to live up to its promise of delivering go-anywhere drivability, even as the folks luxuriating in the back can sip on champagne chilled to the perfect temperature by a built-in refrigerator.

“Our customers expect to go everywhere in luxury, effortlessly and without compromise,” said Torsten Muller-Otvos, the CEO of Rolls-Royce Motor Cars. “The super-luxury lifestyle is evolving (and) luxury is no longer an urban concept. More and more it is about embracing and experiencing the wider world.”

(Is this concept a hint of a super-premium Mercedes-Maybach SUV to come? Click Here to check it out.)

Considering the Bentley Bentayga beat it to market by several years, Rolls’ former partner brand might dispute the idea that Cullinan is the “first” true, super-premium SUV – er, all-terrain, high-bodied car – but at an estimated price tag pushing into the $400,000 mark, the new Rolls will become the most expensive vehicle in the segment, save for some heavily customized one-off products. 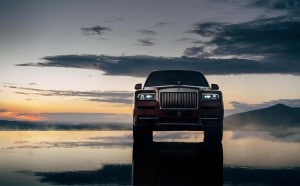 Shorter and taller, the Rolls Cullinan still has a lot in common with the latest Phantom.

Visually, there’s no surprise that the Cullinan might spark a sense of déjà vu. Measuring a full 210 inches, nose-to-tail, with a wheelbase of 130 inches, the off-roader rides on the same all-aluminum “Architecture of Luxury” first used for the eighth-generation Phantom launched barely a year ago. The nose, in particular, might have been lifted directly off the latest Phantom, though the new model’s silhouette is more in line with classic two-box SUVs.

A closer look reveals that Cullinan is about 17 inches shorter than its sibling, the wheelbase itself shortened 9.8 inches. But the ute is 5.6 inches wider, while the ride is 7.2 inches taller. In part, that reflects the higher seating position, but it’s also to allow for significantly greater ground clearance. Riding standard 22-inch wheels, Cullinan can ford up to 21 inches of water.

The beast is a heavy one, weighing in at 5,864 pounds, much of that for the all-wheel-drive technology and underbody armoring Cullinan adds in order to handle serious off-road challenges. There’s also a semi-active suspension that automatically extends its dampers to keep all four wheels on the ground wherever possible. This is no soft-roader, the British maker clearly emphasizes. 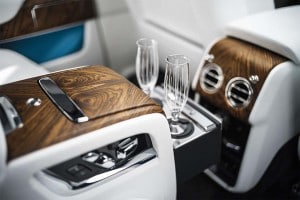 With the twin rear seat package, passengers have access to a built in refrigerator and champagne flutes.

It also points out that this actually isn’t the first time one of its vehicles has been equipped to handle sand dunes and other serious challenging terrains. A Rolls-Royce Silver Ghost Tender was heavily modified back in 1916 by one Colonel T.E. Lawrence of the British Army. You may better recall him as Lawrence of Arabia. Indian royals often modified their own Rollers before partition, turning them into hunting cars.

Going off-road does have its challenges. But Rolls went to great lengths to live up to the slogan for the new Cullinan: “Effortless, Everywhere.” To make it easier for passengers to climb in and out, that suspension system automatically lowers the SUV 1.6 inches when the doors are unlocked, rising back up to its standard height when you get ready to move. The system is designed to retain the classic “magic carpet” ride Rolls is known for, smoothing out the ride over all but the roughest terrain.

Once inside, occupants will experience the same sort of luxury they might find in the new Phantom, with seemingly endless amounts of leather and wood covering the padded instrument panel, doors and seats. The two vehicles share a digital instrument cluster, though it’s visible, inside Cullinan, through a smaller, thicker, leather-wrapped steering wheel. The big infotainment display now can be operated by touch, as well as the Spirit of Ecstasy controller now repositioned atop the center console. 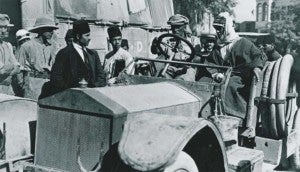 When he wasn't riding a camel, Lawrence of Arabia prefered this modified Rolls-Royce Silver Ghost.

The back of Cullinan retains the Business Class jet-style seats found on the Phantom, albeit here rising slightly above the front buckets to give occupants a view of what challenging terrain they might be approaching. There’s an optional fold-down “lounge” bench seat boost seating to five. But if opting for the twin rear seats, passengers are separated by a console that neatly stores that fridge, as well as a cabinet containing both whiskey glasses and champagne flutes. A Rolls owner would never be caught drinking from the wrong glass, after all.

There’s even an optional glass partition that helps separate the passenger and cargo compartment so that if the tailgate needs to be opened on a cold day, occupants won’t have to be exposed to the elements.

There are, as one always expects from Rolls, plenty of different ways to customize Cullinan. One of the “activity modules” provides comfy seats that pop up stop the tailgate for those who want to picnic or, perhaps, attend a football outing. “Recreational modules” are designed to hold an owner’s outdoor gear, delivering it by a motorized, pop-out drawer. Depending upon how the cargo compartment and back seats are configured, there’s up to 68 cubic feet of storage space.

To power the hefty beast, Cullinan draws power from a 6.75-liter twin-turbo V-12 making 563 horsepower and 627 pound-feet of stump-pulling torque. Among other niceties, the SUV gets a four-wheel-steering system to enhance both high-speed handling, Rolls says, and low-speed maneuverability.

(Lamborghini Urus makes it debut – and may get a companion model. Click Here to learn more.) 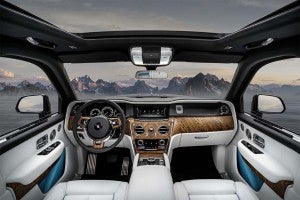 The rear seats are mounted higher to give occupants a commanding view of the road ahead.

The new Rolls-Royce Cullinan joins a rapidly expanding market for ultra-premium sport-utility vehicle. Land Rover, which ultimately invented the niche with its original Range Rover, has been rolling out a series of ever more luxurious – and expensive – variants. Bentley’s Bentayga is now that brand’s top seller. Lamborghini recently rolled out its new Urus model and Aston Martin is aggressively working up a production version of its DBX concept. Even Ferrari now has plans to enter the SUV market.

Rolls plans to deliver the first Cullinan sometime late in 2018. While final U.S. pricing hasn’t been released, Rolls indicates it expects the typical Cullinan to carry a price tag of over $400,000. Extensive customization could push that figure up substantially.

(Bentley reveals plug-in hybrid version of the Bentayga. Click Here to check it out.)