The Japanese automaker learns its lesson with all-new three-row SUV. 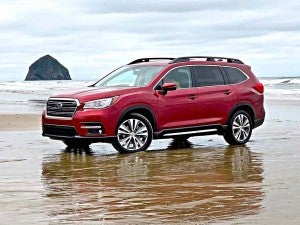 The Subaru Ascent's X Mode is able to handle a wide variety of conditions, including wet sand.

An hour-some outside of Portland, as you head for the rugged Oregon coast, you’ll pass through the quaint old town of McMinnville. It’s known, it seems, for three things: walnuts, the annual Alien Festival – which celebrates a local farmer’s alleged encounter with a UFO – and the Evergreen Air and Space Museum. Dwarfing an indoor football stadium, the star of the collection is the legendary Spruce Goose, among the biggest aircraft ever built.

With eight radial engines mounted across its 321-foot wingspan, the 220 foot-long “Flying Lumberyard” was designed as a troop transport able to squeeze in nearly 800 soldiers on a trans-Atlantic flight. There are times when having plenty of passenger space, it seems comes in handy – something we had in mind before heading to McMinnville for a couple days to drive the all-new Subaru Ascent.

While dwarfed by what was officially known as the H-4 flying boat, the 2019 Ascent is the Japanese automaker’s biggest offering yet, capable of seating up to eight passengers in a good bit more comfort than soldiers would have experienced had the Spruce Goose ever gone into service. Equally important, it has the styling and features that were sorely lacking when Subaru launched its first three-row model, the ungainly B4 Tribeca back in 2005.

First shown at the 2017 New York Auto Show, the Ascent likely won’t become Subaru’s best-selling model, but in many ways it could become the brand’s most important. That’s because the market for three-row SUVs has been growing almost exponentially and, “it’s where we’ve been losing existing customers,” said Dominick Infante, Subaru’s national manager of product communications. 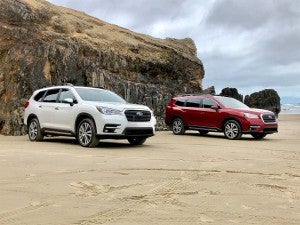 Subaru has itself grown at a lightning pace but it drops off the radar for many buyers in their 30s and 40s who need the extra seats for their families. And three-row models also have found a niche among aging Boomers who like the added room for those retirement trips.

It is, of course, a crowded segment, with entries ranging from the Ford Explorer to the Toyota Highlander, and Subaru’s first entry, the Tribeca, was, if anything, a black eye. “We didn’t get it right the first time around,” acknowledged Infante, asserting that the Japanese automaker has applied the lessons it learned from that flop to the Ascent.

Visually, the Ascent will come as no surprise to those already familiar with the Subaru line-up. It bears a striking resemblance to the current Outback model. It’s a reasonably attractive vehicle, particularly up front, with cats-eye headlamps – LED on highline trim — framing the traditional Subaru grille. There are functional air curtains to reduce wind drag, meanwhile. Subtle creases help add some personality to what might otherwise be a slab-sided design, with chrome surrounding the side windows and stretching across the rocker panels. Wraparound taillights complete the picture. 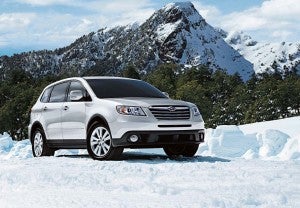 Subaru "learned its lessons" and didn't repeat the mistakes that scuttled its first three-row model, the unloved B9 Tribeca.

But with the 2019 Subaru Ascent, it’s all about the package. And the automaker has done a good job delivering an attractive and functional cabin. With rare exception, Subaru has upgraded the materials found in the Ascent, with nice leathers and simulated wood. The upper portion of the instrument panel could be fitted into many a luxury CUV. But there are a few cut corners. Above the rearview mirror there’s a combination sunglass holder and family view mirror – to see what the kids might be doing in back. Unfortunately, it feels flimsy enough to break off with a modest yank.

Subaru offers both leather and cloth seats for Ascent and the cloth package doesn’t blare “cheap.” You also can order a stain-resistant finish, which is great for families.

The CUV can be ordered with either a mid-row bench or twin captain’s chairs. And the price is the same, whichever option you select. Meanwhile, even backseat passengers will be able to travel in comfort, something you definitely can’t say about all three-row models. In the Ascent, the two-seat back row is roomy, reasonably comfortable and even reclines. And there are the sort of necessities kids need including plenty of cupholders and USB ports. 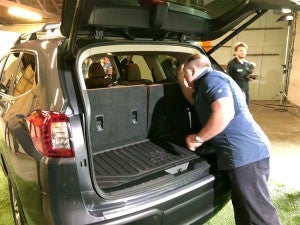 Subaru may, in fact, win the cupholder sweepstakes with a grand total of 19 – for either seven or eight passengers. (Of course, we all have a tendency to use them to hold phones, sunglasses and other accessories, as well as beverages.) There also are tablet holders and eight USB ports.

Technology has become essential for family haulers of all forms and the 2019 Subaru Ascent adds plenty, including onboard WiFi, as well as the company’s infotainment and telematics systems. Depending upon the package you can get up to an 8-inch touchscreen with navigation. Apple CarPlay and Android Auto are standard. There’s also a sweet-sounding Harman Kardon audio upgrade.

As you’d expect with a family hauler, there’s also an extensive array of safety technologies. Subaru has made a name for itself with its sophisticated EyeSight system which largely depends upon stereo cameras mounted behind the rearview mirror. A base version of EyeSight comes standard and includes such desirable advanced driver assistance systems as pre-collision braking and lane departure warning. The package can be upgraded with other features like blind-spot monitoring and adaptive cruise control. 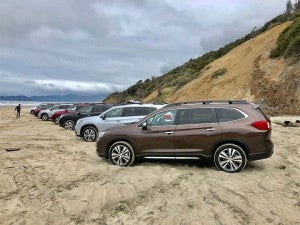 All versions of the Subaru Ascent share the same, turbocharged 2.4-liter boxer engine.

From a mechanical standpoint, all Ascent trim levels offer a single engine, a turbo-four displacing 2.4 liters and pushing out 260 horsepower and 277 pound-feet of torque. It’s a solid package with more than enough punch to keep up with key competitors like the Highlander off the line. We experienced no torque steer and only the most minor incidents of turbo lag. All Subaru products — but for the little BRZ sports car – are fit with all-wheel-drive and that carries over to the Ascent.

The Ascent manages to deliver 21 mpg city, 27 highway, and 23 combined – except for models with 20-inch wheels that sacrifice one mile per gallon – and it does so on regular unleaded fuel. That positions it as one of the most energy efficient entries in its class.

Subaru doesn’t target the rugged outdoor crowd with Ascent. It’s not meant to take on the eventual, three-row Jeep we’ve long expected. That said, it’s a lot more competent than many, perhaps most, of the “soft-roaders” in its segment. Instead of a terrain control switch with individual setting for things like sand, gravel, snow or mud, there’s a single X Mode switch that enhances traction in a variety of different low-grip situations, while also adding the functionality of hill climb and descent. 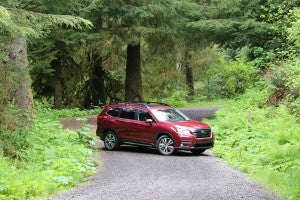 Subaru's X Mode gives the Ascent solid traction in a variety of different on- and off-road conditions.

We found the 2019 Ascent able to handle with aplomb anything we tossed at it during a long day’s drive. That included a delightful excursion down a long and wet beach strand at low tide that likely would have bogged down many crossovers. We later had the chance to test the 2019 Subaru ute on a run through a rutted gravel pit.

A third demonstration showed Ascent’s solid towing capabilities, the base model rated at 2,000 pounds while higher trim levels – which add an oil cooler — can easily manage a 5,000-pound trailer. Better yet, the Subaru SUV features a trailer assist system that’s designed to maintain stability even in heavy winds or if you’re forced to make an evasive maneuver.

At a starting price of $32,970 – including $985 in delivery fees – the 2019 Subaru Ascent doesn’t come cheap. But even that base model is reasonably well-equipped, peppy and one of the most roomy models you’ll find in the three-row segment. That’s especially true in terms of third-row seating and cargo space. Bump up to $35,170 for the even better-equipped Premium trim and you get 18-inch wheels, a bigger infotainment screen and rear climate controls. The Limited is where things really start getting lavish, adding such niceties as leather seating, LED headlamps and 20-inch wheels for $39,970. 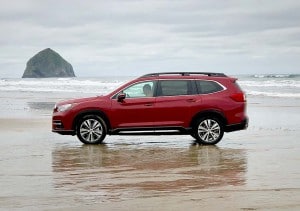 Subaru is counting on the three-row model to attract family buyers who normally skip the brand.

(Just days after selling its 9 millionth car in the U.S., Subaru moves into new NJ HQ. Click Here for the story.)

The real jump comes with the Touring model loaded with everything Subaru can throw at you, including upgraded leather seating, heated and cooled seats, a heated steering wheel, navigation, that Harman Kardon audio system and more.

That may seem a stretch for many Subaru buyers but automakers have found a surprisingly robust market for well-equipped SUVs, especially three-row models. The 2019 Subaru Ascent is not just nicely outfitted but extremely competent in just about everything it does. And we’d be shocked if it doesn’t click with the brand’s loyal buyers while also winning over motorists who traditionally have gone elsewhere for seven and eight-seat SUVs.