Design, performance and tech add up in an appealing new package. 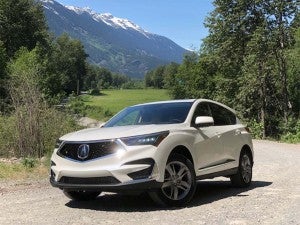 Acura has delivered an almost entirely ground-up remaker of its compact RDX crossover for 2019.

Its been more than three decades since Acura helped redefine the luxury car market, the original Legend model proving a Japanese sedan could stand up against key European and American competitors. But what would Honda’s highline brand bring to market if it were to debut today? The answer is pretty much unambiguous: a ute. Or, more precisely, a crossover like the new 2019 Acura RDX.

It’s not just the names on the field that have changed since Acura’s 1985 debut. The luxury market has, like more mainstream segments, rapidly shifted from sedans and coupes to SUVs and CUVs in a broad array of sizes and shapes. And the good news for Acura is that while its traditional passenger car models have lagged behind, it has done reasonably well with utility vehicle offerings like the big MDX. But it’s the compact CUV market where most of the growth is taking place, so it’s no surprise that Acura has put so much effort into developing the third-generation RDX model.

The Japanese marque has focused on three key pillars: design, performance and technology. And the payoff is readily apparent. While there are limits to what you can pull off with a so-called “two-box” design, the RDX is one of the more handsome CUVs to reach market lately, while also delivering a fun-to-drive experience. Add to that an array of new comfort, convenience and safety systems – though not everyone is going to be enchanted by the RDX’s distinctive True Touch controller. 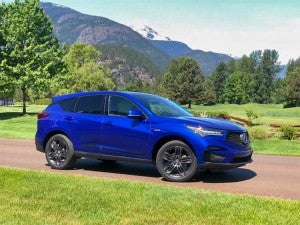 With the launch of the 2019 RDX, Acura brings back the A-Spec performance design package.

Visually, the 2019 RDX borrows heavily from the well-received Acura Precision Performance Concept of a few years back. Despite its two-box design it is one of the market’s more sporty looking crossovers, with a swept back roofline that appears to float above the rear pillars. It manages to pull off that look without adopting the bloated and off-balance look of some of BMW’s coupe-like SUVs, such as the X6. The new RDX also drives the final nail into the coffin of Acura’s beak-like design theme, replacing it with a much more appealing pentagon grille framed with cat’s eye headlamps, each using seven LEDs.

No, the 2019 RDX isn’t as striking as an Alfa Romeo Stelvio or Maserati Levante, but it strikes a welcome balance between styling and utility and that’s likely to appeal to potential buyers who’ve not yet been ready to make the move out of a classic luxury sedan.

Developed in the States, and produced at a plant in East Liberty, Ohio, the larger body of the 2019 RDX rides on what Acura bills as an all-new chassis, and while there are some elements common to the Honda CR-V, it is essentially unique to the RDX.

For those who want an even more sporty appearance, Acura has brought back the A-Spec model for 2019. It features some aggressive nose and side detailing – which happen to increase wind drag and actually cut fuel economy by one mile a gallon. 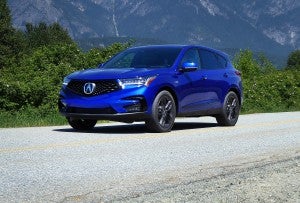 All versions of the 2019 RDX feature a new 2.0-liter turbo-four, with SH-AWD returning as an option.

The modest increase in the 2019 RDX’s dimensions translates into a notably roomy interior – and one that’s decidedly more luxurious than the outgoing model. The cabin is swathed in wood and aluminum trim, and even the “base” seats are finished in soft leather. They’re also one of the nicest features of the cabin, comfortable and yet also offering a surprising amount of support, even for those who accent the word, “sport” when driving their SUVs. Buyers might consider opting for the seating package upgrade that add power side bolsters and thigh support.

From Acura’s point of view, the highlight of the 2019 RDX cabin is its all-new infotainment package. For those willing to pay the premium for the new ELS Studio 3D audio system, we wholeheartedly agree. The 710-watt, 16-speaker package is named for Elliott Scheiner, the multi-Grammy-winning music producer who does more than just stamp his name on the system. What he’s come up with is one of the best audio systems on wheels – and better than almost any home audiophile package. It is clear, accurate and allows each instrument to seemingly appear in mid-air. 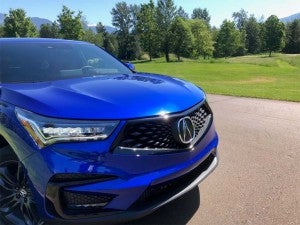 The 2018 Acura RDX gets 22 mpg City, 28 Highway and 24 Combined in base front-wheel-drive versions of the new RDX.

A bit more controversial is the AcuraLink with True Touch control interface. The brand has often tried to forge its own approach to infotainment, previously relying on twin screens at the top and middle of the center stack. Here, there is a single, 10.2-inch LCD screen. Its function are customizable, much like a smartphone. But rather than being operated by direct touch, or with a control knob, Acura has opted for a slightly concave variant of the touchpads found on most of today’s laptop computers.

A miniature version of the LCD screen, tap the left corner and that’s where the cursor will appear, for example. It takes a bit of getting used to, but once you do it is far more effective than the touchpad that Lexus relies on, for one. But as with Lexus, Volvo, Lincoln and others that have largely walked away from buttons and knobs, we still think the Touchpad requires some unnecessary compromises. It was far slower than a knob controller when trying to zoom in and out on the navi screen for one thing, or sliding down the lengthy list of music Mssr. Scheiner provided us to demonstrate his new audio system.

To its credit, Acura does offer a volume knob and manual controls for all climate control features – including seat heaters. But we’d really like a knob for tuning and some other key functions. That might also solve another problem: while the new AcuraLink system can be used with Apple CarPlay, Android Auto is notably absent. That’s because Google, parent of the Android system, is still working on a touch-based interface. It will come, eventually, we were told. 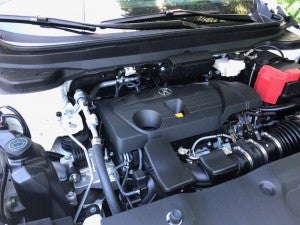 All versions of the 2019 Acura RDX will be powered by a new turbocharged, two-liter inline-four.

As you might now expect, Acura has loaded the 2019 RDX up with plenty of safety technology, as well. In fact, even base models get a version of the AcuraWatch tech suite which includes such welcome features as forward collision warning with auto-braking adaptive cruise control, lane departure warning and lane-keeping assist. Upgraded versions add blind-spot monitoring, sonar parking sensors and rear cross-traffic alert.

It’s easy to over-use the phrase, “all-new,” many a model billed that way really only offering modest updates. But Acura designers and engineers truly went to town developing the 2019 RDX. While it rides at the same height as the outgoing model, those willing to drop to the ground and peer underneath will discover, for one thing, an all-new, multi-link rear suspension.

Open the hood and you’ll uncover another significant change. Gone is the old V-6, in all versions replaced by a newly developed 2.0-liter turbo-four. Its 272 horsepower output is slightly down from the old 3.5-liter powertrain, but it makes up for that in the torque category, and it gets to that 280 pound-foot peak quickly and smoothly, so, under most circumstances you’ll see a big improvement, the 2019 Acura RDX hitting 60 in around six seconds.

In Sport Mode, incidentally, the RDX adds more grunt to hard acceleration. Rather than using mechanical systems to boost audio feedback, it’s enhanced through the sound system – though Acura claims that what you here is the actual engine and not a synthetic reproduction, as some other manufacturers have resorted to. 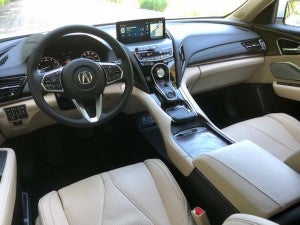 AcuraLink's True Touch control interface features a single, 10.2-inch LCD screen. Its function are customizable, much like a smartphone.

Better yet, power is directed through a new 10-speed automatic transmission that does everything one could hope for from a new-generation gearbox. It is all but transparent, intuitively always seeming to find the right gear, whether you’re cruising or stomping hard on the throttle. Credit the transmission as a major factor in achieving as much as 22 mpg City, 28 Highway and 24 Combined in base front-wheel-drive versions of the new RDX.

Base cars, and even the A-Spec, can be ordered in FWD configuration, but buyers will be missing out on the return of Acura’s Super-Handling All-Wheel-Drive system. It’s as nimble as its name is awkward, not just moving torque front-to-rear but also side-to-side, enhancing steering, rather than pushing, through corners. Combined with the new five-link suspension, it translates into one of the most sporty rides you’ll find in the compact SUV segment.

The SH-AWD system isn’t cheap, at an additional $2,000, but by enhancing handling, as well as grip on wet or snowy pavement, we think it’s absolutely worth the money, even if you don’t live in the Snow Belt.

If that’s too rich for your budget, you can drive off in a base 2019 Acura RDX for just $38,295, which includes $995 in delivery charges. That’s the same as the outgoing model and a bit of a discount compared to key European and Japanese competitors.

Opt for the mid-level Tech package and you’re up $41,495. The base-level A-Spec model, meanwhile, comes in at $44,495 – in front-wheel-drive configuration, and $46,495 with SH-AWD. Pretty much loaded with everything you can imagine – which includes Head-Up Display and the stunning new 16-channel ELS sound system – and you’re writing a check for $48,395.

Considering that Acura has largely delivered on all three of those basic pillars – styling, performance and technology – as well as comfort and roominess, we came away solidly impressed by the 2019 RDX. Acura has been something of an also-ran in the luxury market in recent years, but if this is any indication of where the brand is heading, it has a promising future in store.