Drug Use Linked to Growing Number of Fatal Car Crashes

Motorists often found to be mixing pot, opioids and alcohol. 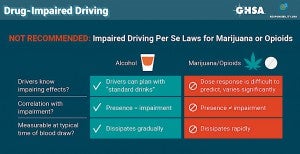 The differences between drunk driving laws and those involving drugs reveals concerning problems.

“Drug Driving is Drunk Driving,” or so declares the electronic road signs found along many Michigan roads in recent months.

In recent decades, authorities have aggressively cracked down on drinking and driving, but a new study by the Governors Highway Safety Association warns that a new danger may be facing travelers: rising use of opioids and marijuana, often in combinations that include alcohol.

Those figures may understate the potential problem, according to the GHSA, because the majority of drivers killed in crashes don’t undergo drug tests. But when they do, they’re often found to have been using alcohol, as well, according to Dr. Jim Hedlund, the author of the GHSA report and a former senior official with the National Highway Traffic Safety Administration. 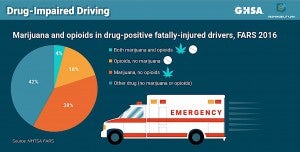 More about the causes of traffic fatalities.

As a result of inconsistent testing, said Hedlund, “It’s impossible to understand the full scope of the drugged driving problem.” But he stressed that, “Drugs can impair, and drug-impaired drivers can crash.”

The report raises serious concerns at a time when the U.S. is facing an epidemic of opioid usage and as more and more states legalize marijuana for medical and recreational usage. But the authors were also raised several caution flags. Just as it is considered safe and legal to drink a modest amount of alcohol before driving, Hedlund added that, “Drivers who are drug-positive may not necessarily be impaired.” And it is unclear how often the use of drugs actually contributed to fatal crashes.

What is known is that alcohol continues to be a problem. Not that many decades ago, it was linked to as much as half of all fatal car crashes in the U.S., It was still considered a primary factor in 28% of traffic fatalities in 2016. Now, “we have to think about the combination of substances drivers are often putting into their systems at the same time,” said Ralph Blackman, president and CEO of Responsibility.org, a Virginia-based non-profit focused on drunk driving.

Drug driving is not a uniquely American phenomenon. Belgian authorities last December reported that three-quarters of the country’s motorists who admitted using drugs while driving had also used alcohol. And at a Madrid seminar this month sponsored by the European Transport Safety Council, Spanish authorities reported that 12% of that country’s motorists had admitted driving under the influence of drugs at some point. Overall, drug driving was estimated to be responsible for as much as 8% of driver fatalities in the European Union. 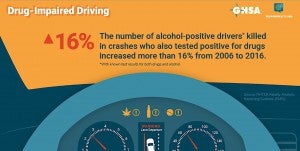 (Click Here for more about how dealers are hampering EV sales.)

“Adding to these concerns is the frequency of poly-drug use, or the use of multiple potentially-impairing substances simultaneously,” the GHSA noted in a summary of its new drug driving study. “In 2016, 51% of drug-positive fatally-injured drivers were found positive for two or more drugs. Alcohol is often in the mix as well: 49% of drivers killed in crashes who tested positive for alcohol in 2016 also tested positive for drugs.

The organization is calling for a number of steps to address the potential drug driving problem:

“Too many people operate under the false belief that marijuana or opioids don’t impair their ability to drive, or even that these drugs make them safer drivers,” said GHSA Executive Director Jonathan Adkins.

One problem is that, unlike with the use of alcohol, it is far less clear when and how much marijuana or opioids can be used while driving. For example, THC, the active ingredient in cannabis, remains in the blood for an extended period, even after a user is no longer high.

“Research has demonstrated the potential of marijuana to impair driving-related skills,” NHTSA advised Congress in a report last July, but the safety agency also raised several caution flags. It said that it can be difficult determining when a driver using marijuana is unfit to be behind the wheel. And it also questioned the accuracy of tests used to determine if – or how much – THC is in the blood.

“Many studies, using a variety of methods, have attempted to estimate the risk of driving after use of marijuana,” the NHTSA report said. “While useful in identifying how marijuana affects the performance of driving tasks, experimental and observational studies do not lend themselves to predicting real-world crash risk.”

Indeed, several studies conducted since the first states began legalizing recreational use of marijuana have generated conflicting results. One, by the University of Colorado, and released in 2014, showed a surge in fatalities involving stoned drivers. But a NHTSA study conducted in Virginia a year later found no clear increase in risk.

(To see more about how U.S. new vehicle sales are blooming in May, Click Here.)

The GHSA study clearly indicates that more research is necessary, while a mix of education and prosecution could be used to prevent a potential problem from growing worse.