BMW Unleashes its Most Powerful M5 Ever 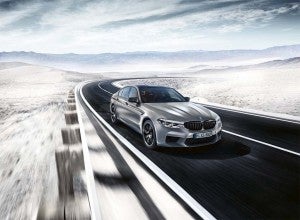 At 600 horsepower, you might think that the 2018 BMW M5 can make good claim to being “the ultimate driving machine.” But the Bavarian automaker apparently had second thoughts and has decided to amp things up a bit.

Come 2019, if you’ve got $110,995 in loose change you’ll be able to head down to your local BMW showroom and order up the 2019 M5 Competition model. At 617 horsepower, this beast has more than enough power to scare most competitors on the track, but it will be completely street legal – well, unless you try to push it anywhere near to the limits.

Picking up on the theme we first saw with the M2 Competition, BMW has made some low-key exterior and interior enhancements, focusing most of its efforts on what you’ll find under the hood – and that not only means more ponies but a more distinctive – read: louder – exhaust note.

The Competition sedan shares the basic 4.4-liter twin-turbo V-8 you’ll find in the current M5, but it punches out another 17 horsepower through those black-tipped quad exhaust pipes. Torque remains the same at 553 pound-feet, but it comes on at a mere 1,800 RPMs, and that helps cut the Competition’s 0-60 launch time down to a mere 3.1 seconds, about a tenth quicker than before. You’ll hit 125 mph in 10.8 seconds, or 0.3 seconds faster than the “base” M5, meanwhile, with both versions electronically limited to 155 mph. 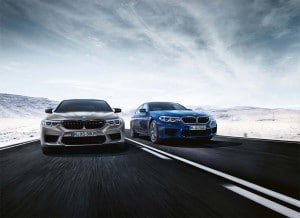 The new M5 Competition begins production this summer and should be in dealerships this fall.

(BMW profitability hits a bump. Click Here for the story.)

To handle the added power, by the way, the M5 Competition adopts stiffer engine mounts and there are modified front and rear sway bars, among other enhancements. There’s also a bit more negative camber for improved handling.

BMW engineers have lowered the Competition an ever-so-slight 7 millimeters compared to the stock M5, improving aero and lowering the car’s center of gravity.

You’re likely not to notice that, but you certainly should pick up the new gloss black BMW kidney grille, side vents, Gurney flap, mirror caps and diffuser. There’s a black stripe running the width of the sedan and you can order the side skirts with a white-lettered “M5 Competition” decal. There are additional black accents around the door handles. And the 20-inch light alloy wheels are staggered, 275/35R20 up front, 285/35R20 in the rear. 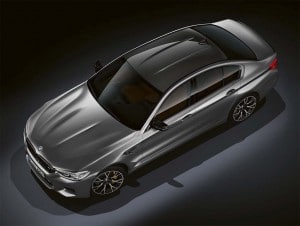 Stopping is always a good thing, so there are compound brakes, with six-piston calipers up front and single pistons in back. You can always opt for the carbon-ceramic package which, considering the base price of the Competition, doesn’t seem all that daunting anymore.

At $110,995 – plus delivery charges – the 2019 BMW M5 Competition comes in at $7,400 over the standard-issue M5. The Bavarian automaker hasn’t confirmed when the first of the new models will reach U.S. showrooms, but production is set to launch in July.