System would allow an EV to constantly stay charged. 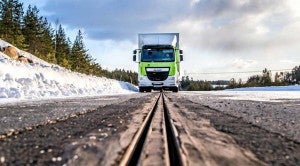 Battery-cars are great – as long as you don’t worry about running out of power without a place to charge back up. But a consortium set up by the Swedish Transport Administration may have come up with a solution for range anxiety it has dubbed eRoadArlanda.

The pilot project, which stretches for 1.2 miles between the capital city of Stockholm with Arlanda Airport, allows electrified vehicles to draw power from an underground electrical grid so that their batteries never run down.

It works much like an oversized slot car track, explained Hans Säll, the chief executive of eRoadArlanda, who said, “There is no electricity on the surface. There are two tracks, just like an outlet in the wall. Five or six centimeters down is where the electricity is.”

(EV investments are booming, but is the demand there? Click Here for the story.)

Unlike some other concepts that have been proposed as ways to keep battery-cars charged while driving, there are no overhead wires, nor live tracks on the surface that could create a dangerous scenario if a person or animal were to come into contact. When a vehicle designed to use the system passes over the track, a movable arm reaches up and essentially plugs into the bottom of the vehicle to make a solid connection. 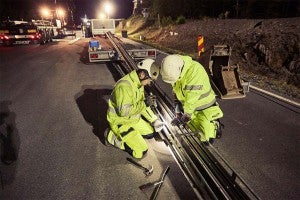 Workers working on the 1.2-mile pilot stretch of track for eRoadArlanda.

To further ensure safety, the connection only remains powered up while a vehicle is moving.

The project isn’t cheap, at about $1 million per kilometer (or about $2 million total for the pilot stretch). But setting up charging stations isn’t cheap, either, requiring land and charging hardware. And where today’s chargers require a vehicle to remain idle anywhere from 20 minutes to eight hours, the eRoad system would provide all the electricity a vehicle might need while it runs, so there’d be no stops needed along the way – potential making it quicker to travel than with a gasoline or diesel vehicle that would have to refuel every few hundred miles.

Conceivably, the eRoad system would not only free EVs to travel much further – and more easily – than they can today, but it might also change the very model by which vehicles are taxed.

One of the concerns being raised about battery power is that motorists are likely to do much of their charging overnight, often while using off-peak pricing plans that would cost as little as a penny or two per mile. By comparison, a vehicle in the U.S. running on gasoline is typically paying about a dime a mile, at least a penny of which goes into federal and state coffers. Without coming up with an alternative pricing method, road building and maintenance funds could run dry. 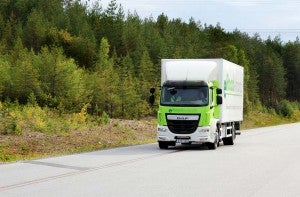 The system is designed to minimize risk. Meanwhile, it can track and charge users.

But the eRoad system can precisely track exactly how much energy each vehicle is using and can automatically bill it back, much like many modern toll roads do, either by sending a motorist a bill or charging a fee to a debit or credit card.

Initially, the eRoad rails runs parallel to one another on Swedish route 893 heading towards a freight terminal at the Arlanda Airport. It will initially be used by trucks but could handle cars, as well. The Swedish government has already indicated it would like to add more track if the test launched this week proves successful.

Along with keeping the live contact hidden below the road, developers say they have taken steps to prevent the system from being shorted out by rain or snow, and the contact arm acts like a plow to sweep any obstructions out of the way. The gap for the contact arm, they also note, is small enough not to pose a problem for bicycle or motorcycle wheels.

Rain reportedly won’t pose a problem either. Drainage systems are in place along the track, and the contact arm has been designed to push water out of the way – as well as gravel, rocks and other small obstacles. The gap between the rails is also too small to cause a problem for motorbike and bicycle wheels. 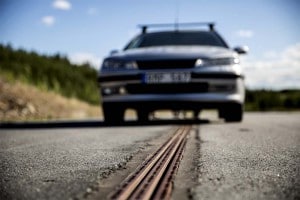 Initially, the project will be used by trucks, but cars could "plug" into the system, as well.

The eRoadArlanda project claims to be the first to use charging technology on a public road but there are a number of other projects designed to try powering up vehicles – including cars, trucks, buses trams and other battery-based transportation systems – which they are moving.

That includes a rapid-charge technology for electric buses that gives a fast juice fix whenever the vehicle pulls into a fixed stop.

German technology giant Siemens has explored using overhead wires for trucks, much like one finds on electric buses and trams in cities such as San Francisco.

Others have been testing ways to use induction charging – essentially, an oversized take on the wireless charging systems now becoming commonplace for cellphones. That approach is being targeted by an Israeli start-up, ElectRoad, which wants to power battery buses operating in Tel Aviv.

Not everyone is convinced the idea of using roadways to keep battery-cars charged is either technically sound or economically feasible. And, as new, lower-cost, longer-range batteries come to market the concept may prove less appealing. That could be further enhanced by new charging concepts that could let a vehicle with a 300-mile battery pack “fill up” in roughly the same time as it now takes to top off a gas tank.

(Toyota plans to have its cars “connected” by 2021. Click Here to learn why.)