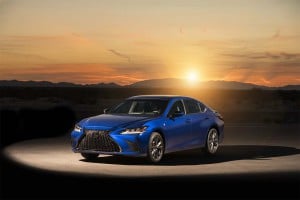 For those who haven’t been watching, the 2019 Lexus line-up won’t have much in common with the model mix of just five years ago. Where sedans once dominated the brand’s product portfolio, crossovers like the new UX and NX, as well as the long-popular RX, have overwhelmed traditional Lexus sedans such as the LS and GS.

So, it might come as a surprise to see the big deal Lexus is making over the launch of the all-new 2019 ES sedan, going so far as to stage simultaneous previews in both Los Angeles and the Beijing Motor Show.

Lexus officials might have reason to be sentimental about the ES. It was, after all, one of the two nameplates that launched the brand nearly 30 years ago – along with the flagship LS sedan. But despite the massive shift to SUVs and CUVs, Ericksen stressed, there’s also a good business case to be made for not just keeping but significantly updating the Lexus brand’s entry sedan. 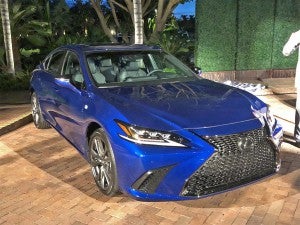 The first-ever Lexus ES 350 F-Sport makes its debut in L.A. - and at a separate event in Beijing.

Of the 10 main luxury product segments, midsize sedans remain second-largest, with annual U.S. sales of around 350,000. The ES alone generates 50,000 sales for Lexus, and is one of the brand’s most important conquest models, noted Ericksen, adding that, “There’s a role for sedans. We’re confident of that.”

But as the automaker set out to develop a seventh-generation ES model, it became clear that it couldn’t continue with the plain vanilla formula that had worked so well for the past three decades. In keeping with the pronouncement of Akio Toyoda, CEO of parent Toyota Motor Corp., words like “bold,” and “amazing,” became mantras for the ES development team.

“The ES has always been an elegant luxury sedan,” said Yasuo Kojino, the 2019 model’s chief designer, ahead of the car’s Beijing launch event. “For this generation, we have added daring design elements that challenge the traditional expectations of buyers.”

Not surprisingly, that includes the familiar, and increasingly aggressive “spindle grille” that has adorned such new Lexus models as the LC sports coupe. It’s not quite as imposing on the 2019 ES, but still more distinctive than what was seen on the outgoing model. The grille is framed by slit-like headlamps that enhance the sedan’s sense of motion. 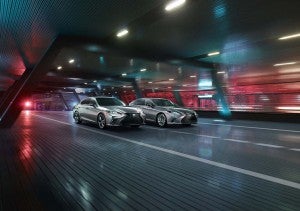 A gas and a hybrid version of the new ES.

The 2019 sedan’s fenders flare out, while the doors have actually been pulled in slightly, giving the new ES a subtle coke bottle shape. Meanwhile, there are an assortment of lines and creases, as well as a more coupe-like roofline.

At the same time, Lexus engineers made sure not to sacrifice the roominess that has been a hallmark of the model. That meant stretching the car about 2.6 inches overall, with it also gaining 1.8 inches in width. The roof, however, drops about 0.2 inches.

The interior has also been significantly updated. There’s more room, by pretty much every measurement. That’s especially true in the back seat – which underscores the brand’s increasing emphasis on the Chinese market, where luxury buyers are still highly likely to use a chauffeur while they stretch out in back.

(The original ES was offered in just one market: the U.S. Lexus products are now sold in 90 countries.)

The new Lexus ES now shares the same Global Architecture-K platform found underpinning most new Lexus models. It’s all but identical to the Toyota New Generation Architecture, or TNGA, platform used for models ranging from the gen-4 Prius hybrid to the big Toyota Avalon. Indeed, skeptics might argue that the 2019 ES is pretty much a gussied up version of the all-new 2019 Toyota Avalon, though Lexus officials are quick to point out the numerous, if relatively modest, ways they differ. 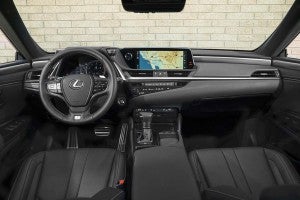 One of the big developments for the next-gen Lexus sedan is the debut of a first-ever F-Sport version. It features a number of cosmetic enhancements, including a more sophisticated version of the spindle grille, and an intriguing way of processing exterior aluminum accents using a Japanese sword-making method known as Hidori.

The F-Sport will be offered with a new Adaptive Variable Suspension system similar to what’s offered on the Lexus LC 500 coupe. It can adjust all four dampers individually to enhance handling and traction. There’s a new Sport+ driver’s mode. And switching to Sport+ activates a new Engine Sound Enhancement system.

At the other extreme, Lexus is bringing back the ES 300h, here using a fourth-generation hybrid drive system pairing a 2.5-liter inline-four with an electric motor drawing power from a nickel-metal hydride battery. The combined package will make 215 hp, and the preliminary estimate is 44 mpg in the EPA Combined cycle.

The new ES will feature an array of high-tech systems, including the latest version of the marque’s Safety Sense+ 2.0 driver assistance technology. That now includes Trace Control, which helps keep a vehicle in its lane. And the newest version of Pre-Collision is now updated to be able to detect bicyclists during the day.

There’s now Apple CarPlay is standard on the seventh-generation ES, and drivers can also access both Apple’s Siri and Amazon’s Alexa voice assistants. Alexa can even connect with the vehicle from home or office-enabled devices. There’s a new onboard WiFi system, and a 12.3-inch display with navi. A head-up display system also is available.

The 2019 Lexus ES will go into production in late summer, according to Susan Elkington, who runs the Toyota plant in Kentucky where the sedan is built. Pricing and final fuel economy numbers won’t be released until closer to the ES on-sale date in autumn.

Whether the seventh-generation model will be able to hang on in a world rapidly migrating to SUVs remains to be seen, but Lexus is clearly not about to give up without a fight.