Jeep Grand Commander: Bigger is Better, at Least in Beijing 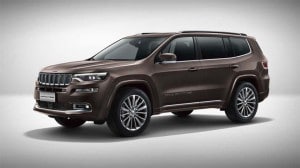 The new Jeep Grand Commander made its debut at the Beijing Motor Show.

We’ve been hearing rumors for as long as we can remember that Jeep will finally catch up to the competition by adding a third-row SUV to its growing line-up.

It’s finally happened – sort of – with the debut of the Jeep Grand Commander at this week’s Beijing Motor Show. The question is whether that seven-seater is what we can expect in the U.S. or if there is another model under development for the States that would revive the old Wagoneer nameplate.

That could certainly hit a welcome target for Jeep considering the strong U.S. demand for three-row SUVs and crossover-utility vehicles. The Fiat Chrysler brand is one of the few key players in the ute market that doesn’t offer a three-row model these days. Even Lexus has gotten into the game with the recent unveiling of a stretched version of its long-popular RX model.

Jeep has done little to hide its interest in a seven-seater, even offering renderings in patent applications. And there’ve been countless sightings of camouflaged vehicles being tested on public roads. Then there’s the Yuntu Concept shown in China at last April’s Shanghai Motor Show. 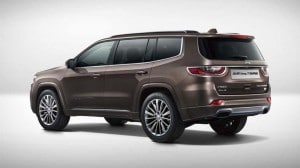 Jeep's new Grand Commander is a seven-seater designed only for the Chinese market.

A close look at the new Jeep Grand Commander suggests it is largely a Grand Cherokee with a few Yuntu design tweaks.

What’s surprising is that this isn’t the enormous stretch that some had expected. It’s no Suburban or Expedition. It’s about 10 inches longer than the current Jeep Cherokee, around 192 inches nose-to-tail, and, at 110 inches, has a four-inch longer wheelbase. But it’s much closer in size – at just two extra inches in length – to the Grand Cherokee.

There has been talk that Jeep might come up with a Yuntu plug-in hybrid, but that’s not what it has rolled out for the Beijing show. Despite the recent enactment of China’s New-Generation Vehicle rules – which effectively call for 20% of sales to be made up of plug-ins or all-electric models – the Grand Commander sticks with an internal combustion engine.

(Click Here for more about FCA’s unwillingness to sell Jeep.) 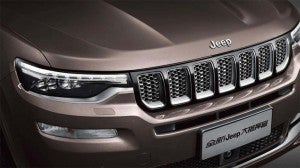 The new Commander's styling borrows heavily from the Grand Cherokee.

More specifically, it’s a 2.0-liter turbocharged inline-four that appears to be lifted from the latest Wrangler and here making 268 horsepower and 295 pound-feet of torque. A nine-speed automatic then directs power either to the front wheels or all four. Could a hybrid or plug-in follow? Parent Fiat Chrysler Automobiles has been slow to embrace electrification but has little option going forward, so it may just be a work-in-progress.

As for plans for the U.S., the Grand Commander seems unlikely to make the jump across the Pacific. It’s based on the same Compact U.S. Wide platform as the newest Jeep Cherokee, but the three-row model long expected to target American buyers is believed to share the same body-on-frame platform as the all-new 2019 Ram 1500 pickup – and reportedly will share the same Warren Truck Assembly plant.

If anything, there are likely to be two versions of what will be called the Jeep Wagoneer, with a more Suburban-like Grand Wagoneer, as well. Could there be room in the market for a downsized Grand Commander, too? So far, that doesn’t seem likely.