No, VW hasn't gone all-SUV, at least not yet. 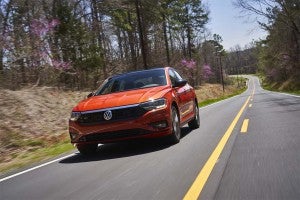 Volkswagen officials have been talking a lot about SUVs, such as the new Atlas, these days. And when they change the subject, they’re as likely as not to focus on battery-electric vehicles like the upcoming I.D. Buzz microbus.

That might seem worrisome for fans of traditional VW sedans and hatchbacks. The good news is that the people’s car brand isn’t abandoning its traditional line-up. True, you won’t be able to get a diesel in the U.S. anymore, but there are some solid alternatives under the hood of offerings like the all-new 2019 Volkswagen Jetta that we had a chance to spend some time with in Raleigh-Durham, North Carolina earlier this month.

“It’s one of our most important products in the U.S.,” said Jan Dickmann, head of the compact car line, before we headed off into a Carolina countryside just starting to burst with spring color. Worldwide, VW has sold 17 million Jettas, including 3 million in the U.S. alone. So, while the automaker might be gaining traction with products like the Atlas and smaller Tiguan, it has a lot riding on the success of the seventh-generation Jetta sedan.

VW pretty much started from the ground up when it launched development of the 2019 Jetta. Like the latest version of the Golf – which it resembles in many ways, albeit with an added trunk – the new sedan is based on the Volkswagen MQB “architecture.” That flexible platform has allowed VW to tailor Jetta specifically for two markets: the U.S. and China. 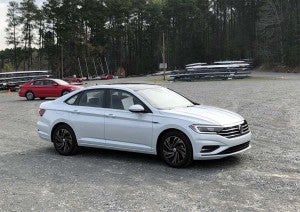 The design is crisper, cleaner and more modern than the outgoing sedan, with a nicely swept coupe-like roofline and more sharply creased body panels – a character line extends from just behind the front wheels, though the door handles and all the way to the taillights. There are distinctive creases in the hood, while the new Jetta adopts a more prominent version of the brand’s familiar three-bar grille, here framed by narrow LED headlamps. (All exterior lighting is now LED, but a customer can upgrade to a longer-range projector LED headlamp package.)

A closer look reveals air curtains up front which are designed to reduce turbulence around the wheels. There also are active grille shutters and sculpted underbody panels.

The windswept design yields a 0.27 drag coefficient. For those without an engineering degree, that translates into improved performance and fuel economy, as well as reduced wind noise. 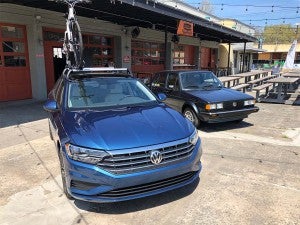 It would take a sharp eye – or a side-by-side comparison to recognize the Gen-7 Jetta is ever so slightly larger than the outgoing model. The wheelbase grows 1.3 inches, to 105.7 inches, the overall length stretched to 185.1”, or an additional 1.7 inches. It’s nearly an inch wider, at 70.8 inches, and a hair taller, at 57.4 inches.

Those numbers, however, don’t fully reveal what you experience inside where there’s notably more head and legroom. No, it’s not a Passat. But you no longer feel like you’re in the penalty box squeezing into the back seat.

The interior is also more stylish than what we’ve seen in the compact segment from Volkswagen, with nicer finishes and improved materials. One disappointment is the lack of power controls for the front passenger seat, even on the top-line model, the SEL Premium. But other options include an eight-inch touchscreen with available navigation, 10-color ambient lighting, a 10.25-inch digital cockpit display and a 400-watt, seven-speaker Beats audio system. It has plenty of car-shaking bass for hip-hop and pop fans. But for those into jazz or classical, it also delivers delightful sound and great instrument staging.

As with a number of other current Volkswagen models, there’s an R-Line model available but, here, it’s all about show, with performance detailing without any powertrain modifications. We’d have liked a little more sportiness there, especially as Jetta’s 1.4-iter turbo-four makes 23 horsepower and as much as 12 pound-feet of torque less than the engine delivers in the Golf. That said, Jetta’s 147 hp and 187 lb-ft ratings belie the compact sedan’s peppy performance. 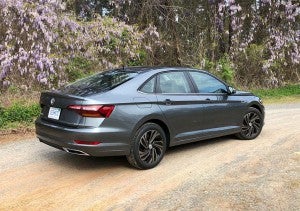 The new Jetta gets an estimated 40 mpg on the Highway, according to the EPA, with City and Combined ratings of 40 and 34 mpg.

Running a 140 mile course that included a mix of city and rural roads, both highway and winding two-lane blacktops, the 2019 Volkswagen Jetta never seemed to lag. And there’s little to no turbo lag or torque steer. No, it’s not a rocket, launching from 0 to 60 in about 8.5 seconds, by our estimate, but it doesn’t bog at a light and it can readily handle freeway passes.

For those who demand still better performance, however, hang tight. A 2.0-liter turbo package for the next Jetta GLI is coming about a year from now.

For now, however, be pleased to know that you’ll get an estimated 40 mpg on the Highway, according to the EPA, with City and Combined ratings of 40 and 34 mpg.

The current powertrain, incidentally, offers you a choice of a six-speed manual – yep, one of the last available in the segment – or an eight-speed automatic. There’s now also three driver modes, Eco, Normal and Sport – okay, four, if you include the customizable setting. 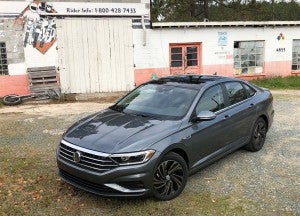 The current powertrain, incidentally, offers you a choice of a six-speed manual or an eight-speed automatic.

Sport tightens up steering, as well as throttle control and transmission. It’s not a dramatic change but you notice it working through aggressive corners. We wondered what handling would be like with Jetta moving – seemingly in reverse – from a multi-link rear to a trailing twist-beam suspension. We didn’t have to work up a sweat. On most roads, the sedan handled like, well, like a classic Volkswagen. It was reasonably nimble, if not quite what we might call a sport sedan, able to handily weave and bob through tight corners.

There are a number of driver assistance systems available, as well, even the base car getting a backup camera and post-collision braking, a system designed to prevent secondary crashes. There are other features, such as blind-spot detection and forward collision warning, that are available in a low-price package and come as standard on higher trim versions, such as the Premium model.

VW has actually tried to simplify the traditionally complex ordering process by combining key options into packages. It has, in turn, added more trim lines. A base 2019 Jetta S with manual transmission starts at $18,545, the automatic coming in at $19,395. The R-Line jumps to $22,995, and a heavily loaded SEL Premium is listed at $26,945. Add $850 for delivery charges to all these numbers. 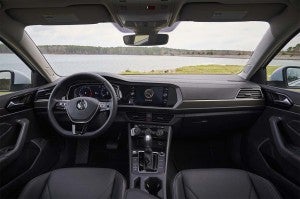 Traditionally, VW liked to tack on a German premium that could run to several thousand dollars. In the wake of the diesel emissions scandal that nearly tanked the brand, however, it has been taking a more contrite approach, one that puts it more on a par with Asian and American competitors. In fact, prices for the 2019 Jetta are down anywhere from $300 to more than $1,800 compared to the 2018 models. The one exception is the newly added, top-line Jetta SEL Premium which adds $700 over the prior top-trim package.

Buyers should also factor in VW’s industry-best six-year/72,000-mile bumper-to-bumper warranty which can be transferred to a new owner.

(To see more about the end of the Beetle, Click Here.)

The German marque has taken a fair bit of hits over the last few years, especially in the wake of its diesel scandal. It has been regaining momentum with the addition of new and updated SUV models. But for those who like classic Volkswagens, the 2019 Gen-7 Jetta won’t disappoint.