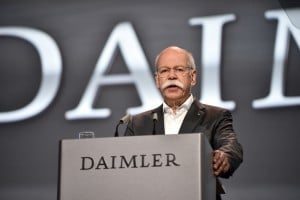 Daimler AG continues to enjoy record success even as it spends heavily on new investments to prepare the company to meet future challenges in an auto industry that is changing quickly and dramatically even as it adjusts to new shareholders.

Daimler CEO Dieter Zetsche also moved quickly at the beginning of the company’s annual shareholders meeting in Berlin to head off questions about the investment of Li Shufu, the Chinese entrepreneur who recently acquired approximately 10% of Daimler’s shares.

“I’d like to start by saying our talks with Li Shufu have been very positive,” Zetsche said. “He wants to have a long-term investment with Daimler and he supports our successful strategy,” said Zetsche, adding that future collaboration with Li Shufu’s automotive empire, which includes Geely, the Chinese company he founded, and Volvo, is a possibility. 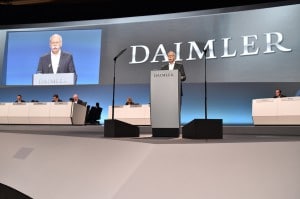 Zetsche talks to shareholders about the company's plans, including any future involvement with its new largest shareholder.

Manfred Bischoff, chairman of the Supervisory Board of Daimler AG, said Daimler hoped Li Shufu, as the company’s largest shareholder will be a force for stability just as the investment by the Kuwaiti sovereign wealth funds has been for more than four decades.

The company was preparing for future, including a reorganization of the company’s major components, which should be ready for a shareholder vote in 2019, Bischoff said.

“Daimler AG mastered many challenges extremely well in financial year 2017 and achieved outstanding results. New records were set for unit sales, revenue, earnings and profitability,” “Daimler is now more successful than ever before. In the mobility sector, which is currently being reinvented, further fundamental changes will be necessary also for Daimler in order to stay successful,” Bischoff added.

Bischoff said technical and social developments that change will change the car industry but also the planning required for the Group’s organizational realignment.

(Click Here for more about Li Shufu and his impact on the auto industry.)

“At Daimler, we take advantage of the opportunities that arise from change,” Zetsche said.

“In recent years, we have demonstrated more than once that Daimler can do more,” added Zetsche, who noted Mercedes-Benz has over taken rivals such as BMW and Audi to become the world’s largest maker of luxury vehicles.

Daimler AG continued along the path of profitable growth path in 2017 and once again set records for unit sales, revenue, earnings before interest and taxes and net profit.

The record earnings prompted the supervisory board to approve a hike in the shareholders dividend to 3.65 euros per share from 3.25 euros per share, which is highest dividend ever paid out in the company’s history.