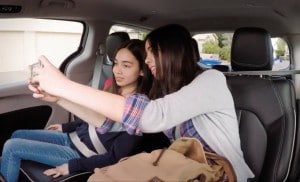 These girls commemorated their ride in Waymo's autonomous minivan with a selfie.

Surveys are showing that a majority of Americans are uncomfortable with the idea of riding in an autonomous, or self-driving vehicle.

In fact, the most recent AAA study shows that 63% of Americans are reticent to get into an autonomous car. That number is down from 78% from the previous year.

Although the numbers of nays are shrinking, its apparent that it’s going to require some heavy marketing on the part of automakers that are heavily investing in self-driving technology development, and Waymo CEO John Krafcik is helping to lead the charge.

Appearing at SXSW in Austin, Texas, Krafcik grabbed the opportunity to showcase what happens when people gave Waymo’s autonomous minivans a chance and took a drive without a driver with a video of passengers in the company’s Early Rider program in Phoenix. 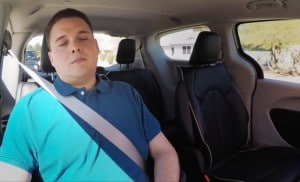 It is true: at least one Waymo Early Rider was so underwhelmed about his drive in an autonomous minivan he fell asleep.

(Waymo gets the go to launch first-ever completely driverless vehicle program. Click Here for the story.)

What happened? Well, what happens every time people get into a car: they checked their phones, they giggled and chatted, they took selfies and, in some cases, they fell asleep. Actually, a few even thanked the car for getting them to their destination.

“Americans are starting to feel more comfortable with the idea of self-driving vehicles,” said Greg Brannon, AAA’s automotive engineering and industry relations director. “Compared to just a year ago, AAA found that 20 million more U.S. drivers would trust a self-driving vehicle to take them for a ride.”

These videos appear to support the study’s finding. That said, the video only showed positive reactions and folks who sign up for programs like this are likely to be early adopter types who take to new technology more easily and readily that others.

Waymo began inviting members of its Early Rider program in Phoenix to take trips in its fully driverless minivans last fall. While no one was in the driver seat, a Waymo employee and a camera operator were in the vehicles during the rides. The company plans to keep a staffer in the car for the initial phase.

The company is testing in several states, although Arizona is currently the only that gave Waymo a permit to operate a driverless ride-hailing business, and it has completed of 5 million miles of testing on public roads.

According to AAA, male drivers and millennials are most trusting of autonomous technology, with only half reporting fear of riding inside a fully autonomous car. Despite the fact that more than 90% of crashes are the result of human error, most drivers consider their driving skills better than average and are leery of handing over control of their vehicle to a machine, the study noted.

(To see more about how autonomous EVs will cut ride-share costs in half, Click Here.)

Two things to note: it was, indeed, a man who fell asleep while on a test ride and it was a man who noted in his test drive, “It’s the future.” The future is now for those folks.