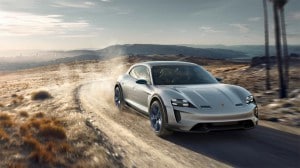 The Porsche Mission E Cross Turismo is one of the big hits of this year’s Geneva Motor Show and while officially a concept vehicle, the battery-electric crossover is expected to soon follow into production the Mission E coupe launching next year.

Both cars will ride on a specially developed platform, dubbed J1. Meanwhile, sibling brand Audi’s upcoming E-tron Quattro battery-car will use the same MLB architecture as its more mainstream models, like the A4, as well as the new Bentley Bentayga SUV.

But, going forward, Those three luxury brands are partnering up to develop an entirely new and unique platform they will share for all future electric vehicles, according to a senior company official. Codenamed PPE, for Premium Platform Electric, it will go into all Audi, Bentley and Porsche electric vehicles from 2022 on.

Ironically, the decision by the three VW luxury brands comes at the same time BMW has decided to abandon its own strategy of developing unique electric vehicle platforms.

(Click Here for a first look at the Porsche Mission E Cross Turismo.)

There will be three subtle variants for each of the brands, but they’re all working together, Audi technical development director Peter Mertens told Automobile magazine, noting, “These are joint, co-located teams, bringing the best engineering know-how of the (brands) together to make it happen.” 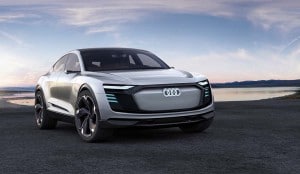 Audi will soon launch a Q5-sized BEV and has shown other concepts that could follow.

The decision to develop a unique luxury electric platform is not entirely surprising. Parent Volkswagen AG has been pushing hard to minimize the number of unique architectures its uses and then share them across its dozen light vehicle brands. That includes the MQB platform underpinning such models as the VW Golf and Passat. But a special architecture, known as the MEB, will be used for mainstream electric models, like the upcoming Volkswagen I.D. Buzz, I.D. Crozz and I.D. Vizzion.

As with VW’s up-market brands’ MLB platform, the company has decided it also needs an upscale version of the MEB, something Audi CEO Rupert Stadler signaled last month in a series of interviews when he said the brands would jointly invest “a low single-digit billion euro sum to develop the architecture.”

Sharing one platform between the three brands will yield big savings, Stadler’s counterpart at Porsche, CEO Oliver Blume said, noting that “If (they) would act on their own, costs would be 30% higher.”

(Click Here for a first look at the new Bentley Bentayga Hybrid.) 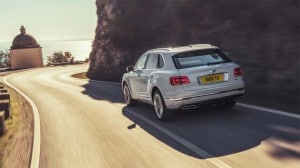 The Bentley Bentayga, including the new plug-in model, share the current MLB platform used by an assortment of Audi and Bentley models.

But developing a unique electrical architecture wasn’t something Audi was originally planning at all. It had wanted to rely on a single platform, the existing MLB, for all of its powertrain options. That way, say, an Audi Q5 SUV could be offered with a choice of gas, diesel, hybrid, plug-in and even pure battery-electric power.

“We have changed direction,” said Mertens. “You give up too much potential if you have a platform that tries to do everything. It’s too expensive, too heavy. It has proportions that do not fit with luxury brands.”

Audi isn’t the only automaker arguing for a unique electric platform strategy. Jaguar followed the same route for the new I-Pace that also debuted in Geneva.

“We set out with a clean sheet approach to harness new battery electric technology with an architecture engineered from the outset to optimize EV performance, aerodynamics and interior space,” said Ian Hoban, Jaguar’s Vehicle Line Director, noting that this approach allowed the automaker to move the drivetrain and batteries below the load floor, yielding a much larger interior than would be possible with a conventional platform. 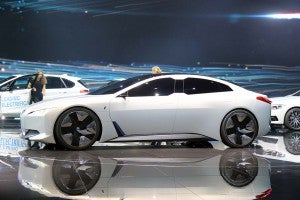 While the BMW i Vision Dynamics will use a unique platform, future electrified BMWs will ride on mainstream architectures.

Ironically, one of the companies that originally pioneered the idea of developing unique platforms for its electric vehicles has itself reversed course. BMW went the unique platform route when it debuted its i3 and i8 models but, as TheDetroitBureau.com first reported last November, it is shifting away from that strategy and will share common platforms going forward so, as Audi originally planned, a future model like the BMW 5-Series could be offered with a choice of internal combustion or various electrified options.

In the process, BMW will pare back its once-expansive ambitions for the “i” sub-brand, though it won’t phase it out entirely, several officials noted in interviews with TheDetroitBureau.com.

(Audi unleashes new A6 sedan in Geneva. Click Here to check it out.)