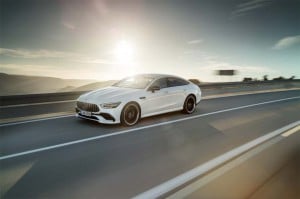 AMG adds another bright shining star to its line-up with the four-door version of its GT.

In recent weeks, the Mercedes-AMG GT 4-Door Coupe has been teased more often than an old-time burlesque ecdysiast but, finally, the fan dance is over and we can see it in all its sheet metal glory at the 2018 Geneva Motor Show.

The original GT was one of only a small handful of vehicles specifically developed for the AMG performance division – following the earlier SLR and SLA models. There’s now an assortment of variants, fast, faster and fastest, but with the addition of the four-door package, performance adds an element of practicality.

“The new AMG GT 4-Door Coupe blends the impressive racetrack dynamism of our two-door sports car with maximum suitability for everyday use,” said Tobias Moers, CEO of Mercedes-AMG GmbH, adding his expectation that it will “attract new customers” who at least occasionally need the added passenger space.

Like the two-door version, the new 4-Door Coupe will be offered with a range of variants:

All three of the models feature stop/start capability, but the EQ Boost function takes things a step further with a 48-volt  starter-alternator package that kicks in an additional 21 hp and 184 pound-feet of torque. 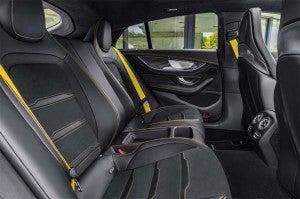 The back seats are both roomy and supportive, something useful when the GT is driven hard.

The addition of the 48-volt electrical system, AMG notes, “also paves the way for the progressive expansion of infotainment and assistance systems.” That’s shorthand for ever more advanced semi- and fully autonomous capabilities. And you should not only expect to see 48V capabilities on the rest of the Mercedes family but across the entire auto industry. The Ram 1500 pickup, for example, adds that capability with its 2019 makeover.

One of the challenges AMG faced was retaining the distinctive and well-received styling of the two-door model while adding two back seats. Further complicating things, the Four-Door Coupe had to maintain the rigid body structure that let the original grand tourer handle so well, whether on street or track. Among the other steps taken, AMG engineers used modeling techniques borrowed from their racing program, ultimately adding “new reinforcement concepts” in the center and tail. The rear axle also adds a reinforced mount to reduce noise, vibration and harshness, or NVH. 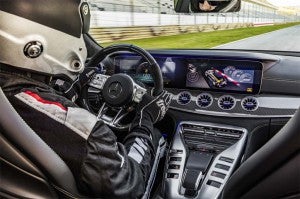 The track-ready GT 63 S will be available with Drift Mode, carbon brakes - and its own scent.

All versions of the GT 4-Door get an AMG performance-modified version of Mercedes’ 4Matic all-wheel-drive, here biased to the rear wheels. For those who want to be able to drift, there’s a Drift Mode, standard on the 63 S and optional on the other two versions. The 63 and 63 S also get an electronically controlled locking differential as standard gear. V-8 models also feature active rear-wheel steering.

To scrub off speed, the AMG GT 53 features internally ventilated and perforated 6-piston front brake calipers painted silver and single-piston floating rear caliper brakes in back. The V-8 models gets larger 6-piston fixed caliper brakes up front, the GT 63 painted red, the 63 S done up in yellow. High-performance ceramic brakes are available for the V-8 models.

As with the two-door GT the new 4-Door Coupe relies heavily on aerodynamics to improve both performance and fuel efficiency. That includes the active Airpanel in the front bumper, as well as a retractable and extendable rear spoiler. An optional aero package is also available for the V-8 models to add more downforce. 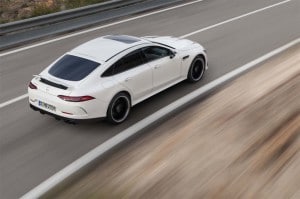 The GT 4-Door coupe will go up against such competitors as the Porsche Panamera.

Depending upon which engine package a buyer chooses, there are up to six driving programs which adjust a range of vehicle functions, including steering, shifting and suspension. That includes a Race mode.

Inside, the GT 4-Door resembles the original two-seater, but there are some updates, including the modified “V8 design” center console. The cockpit is dominated by twin 12.3-inch high-resolution displays which can be reconfigured in a variety of ways. And a touch button on the left side of the AMG Performance steering wheel lets the driver quickly shift the layout of instrumentation and navigation information. The new Supersport view adds AMG-specific information.

Somewhat surprisingly, however, the four-door GT does not yet get the all-new MBUX user interface that debuted at the Consumer Electronics Show in January. This highly interactive system, which features Alexa-style voice assistant features, will show up first on the next-generation Mercedes-Benz A-Class before rolling out across the rest of the maker’s line-up. 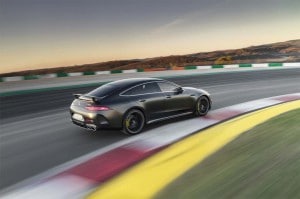 The first, V-8 versions of the GT will reach showrooms in early 2019.

For those who want more than the scent of high-octane petrol in the morning, the new Mercedes-AMG GT 4-Door Coupe even gets its own fragrance which is dispensed into the passenger compartment. And there’s an optional “Energizing” comfort control that uses things like the climate control, seats and ambient lighting to either relax or refresh the driver.

(Trump threatens new import tariffs. Click Here to see what that could mean for Mercedes and other Euro-import buyers.)