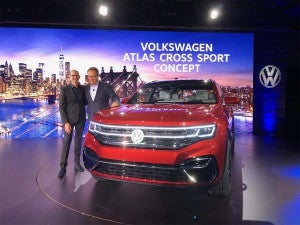 Volkswagen put a new spin on its fast-selling Atlas sport-ute at the NYIAS with the Sport Cross Concept.

According to ancient lore, Atlas carried the world on his shoulders. Not a bad metaphor when you consider the challenge the Volkswagen Atlas was tasked with when it came to market barely a year ago.

The three-row SUV has proven to be one of the most critical offerings the German automaker has brought to the U.S. market in decades and one of the key reasons why VW not only leveled off after years of declining sales but also has actually scored a 5.5% increase during the last 12 months despite the overall American market slowdown.

Now, VW is set to create a “family” of Atlas offerings, with a new two-row, five-passenger version, dubbed the Atlas Sport Cross making its debut during a media preview ahead of the opening of the New York International Auto Show on Tuesday night. But, if the word, “family” connotes more than just two, well, you just might not be wrong. While Volkswagen officials aren’t ready to discuss what’s coming further down the line, still more variations on the Atlas theme could be in the works.

What we’re seeing in New York this week is officially dubbed a “concept,” but it is, at most, a thinly disguised version of what potential buyers will find in showrooms late next year. 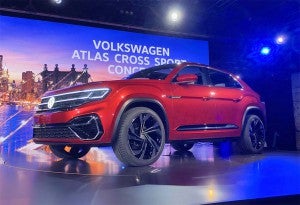 The Atlas Sport Cross Concept is likely to be a production vehicle by the end of media days at the NYIAS.

The two-row, five-seat version of the VW Atlas measures 190.8 inches. about 7.5 inches shorter than the seven-seater, albeit both sharing the same, 117.3-inch wheelbase. It boasts “even sportier proportions,” suggested Hinrich Woebcken, the CEO of Volkswagen Group of America, with “more aggressive front and rear bumpers and a bit more coupe-like to its roofline. In concept form, at least, the crossbars of the Atlas Sport Cross grille light up and serve as daytime running lamps.

Inside, the current Atlas layout is tweaked just slightly, a 10.1-inch touchscreen topping the center stack.. The layout of the display changes depending upon what mode the driver opts for, including Sport, On-Road or Off-Road. There’s also a 12.3-inch digital cockpit replacing conventional gauges.

With the two-row model also set to share the same engine line-up, expect it to boast a bit more dynamic performance. The three-row model offers two options, including a 235-horsepower four-cylinder package, or a 276-horsepower V-6. Both variants are paired with an eight-speed automatic transmission, though all-wheel-drive is optional with the 3.6-liter six. 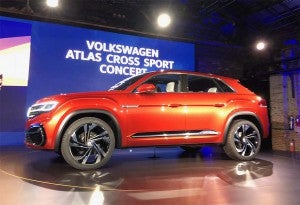 The Sport Cross concept will come with two different power plants to start, but that will expand to as many as four including an electric variant.

We might even see another option: the Sport Cross Concept muscled up to 355 hp by using a plug-in hybrid powertrain that also manages 26 miles in all-electric mode. How serious an option is this? VW has said it plans to have 50 all-electric models across its family of brands by mid-decade, and dozens more plug-ins. And with the Atlas Sport Cross, italso hints it could turn to a conventional hybrid making 310 hp. So, we wouldn’t bet against an electrified option, although not necessarily at launch.

(Click Here for details about VW upping the EV ante by placing $25 billion in battery orders.)

The ability to go with a wide range of powertrain alternatives was one of the central tenets when VW began developing the modular MQB platform that underpins both versions of the Atlas – as well as other models as diverse as the little Golf and big Passat. And it has far more options available, Woebcken noted during a conversation with TheDetroitBureau.com.

“A family starts with two,” he said with a smile, declining to discuss whether other SUVs might be in the works to help grow the Atlas line. But he quickly acknowledged “We’re always looking at growth potential and other opportunities.” 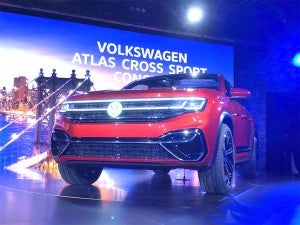 The debut of the Atlas concept reveals how committed VW is to expanding its utility footprint in the U.S.

That would make sense considering the fact that SUVs now account for fully half of U.S. auto sales, and the numbers are still growing. On the other hand, demand for sedans – like the VW Passat – continue to shrink. And considering VW has invested $2 billion in its Chattanooga, Tennessee assembly plant, that’s a problem. The original half of that factory has been devoted to producing the Passat, but with sales of barely 60,000 in 2017, that line is grossly underutilized, even as the production version of the Sport Cross is expected to push the newer side up towards capacity one it comes online.

VW will soon update the Passat, but while that should boost demand, few believe it will go far enough. VW could very easily add yet another SUV using the MQB platform on the same line as Passat.

(Say goodbye to the Beetle. Click Here to learn why and see what will replace VW’s iconic model.)

Look for the two-row Atlas to go into production next year. But whether it will be dubbed Sport Cross is unclear. It will definitely be labeled Atlas but the rest of the name, Woebcken noted, is still up in the air.