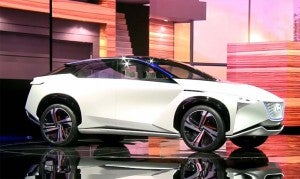 One of the new EVs will be based on the Nissan IMx concept that debuted at the 2017 Tokyo Motor Show.

Already the world’s largest seller of battery-electric vehicles, Nissan is targeting sales of 1 million electrified models by 2022, a five-year, six-fold increase, officials said Friday at the company’s headquarters in Yokohama.

The second-largest of Japan’s automakers also plans to add 20 new autonomous models by 2022, while having all of its vehicles, both under the Nissan and Infiniti brands, equipped with connected car technology.

“The heart of our strategy in terms of electrification is battery EVs and e-Power technology,” Nissan Chief Planning Officer Philippe Klein told reporters during a media briefing. E-Power is the company’s term for vehicles using gasoline engines to extend range.

All told, the carmaker sold 163,000 vehicles using some form of electrification in 2017, a figure not including sales by its French alliance partner Renault. 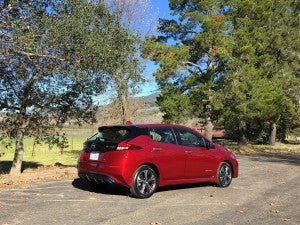 Nissan expects the longer range of the Gen-2 Leaf will substantially increase its appeal.

Nissan was the first automaker to launch a mainstream battery-electric vehicle, or BEV, with the 2010 debut of the Leaf. Since then, it has sold about 300,000 of them, though sales have slowed over the last several years as more competitors have come to market, such as the Chevrolet Bolt EV and Tesla Model 3.

Nissan is just rolling out a second-generation Leaf that delivers 40% more range at a lower starting price. It plans to add a second version next year that will jump from 150 to over 200 miles of range.

“We have more EV customers than any other automaker,” Klein said. “You can count on us to defend our EV leadership.”

While it was first to market, however, Nissan has watched as competitors, Tesla in particular, have added more BEV models, as well as hybrids and plug-ins, to their own line-ups. General Motors plans to have two more all-electric models by mid-2019 and about two dozen by the middle of the coming decade. Volkswagen has promised to develop 50 for its various passenger car brands.

The race to electrify has intensified over the last 12 months. It was initially driven by the U.S. Corporate Average Fuel Economy standards which were set to jump to 54.5 mpg by 2025. Now, even though the Trump Administration is widely expected to roll back the regulations next week, the push to electrify is being driven by tightening emissions and mileage standards in Europe and Asia. Norway and India already have laid out plans to phase out internal combustion engines. The U.K., France and even China are considering similar steps. 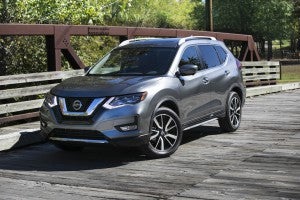 Nissan's Rogue was the first model to get the maker's semi-autonomous ProPilot Assist.

Nissan’s two Japanese rivals have laid out aggressive electrification plans of their own. Toyota, for example, aims to have 10 pure electric models in production by early in the coming decade – and is even setting up a new U.S. plant to build BEV models it is developing in a partnership with Mazda. By 2030, Toyota hopes to sell 5.5 million electrified vehicles annually, a figure that includes hydrogen fuel-cell vehicles.

Honda, meanwhile, wants electrified vehicles of all forms to account for two-thirds of its sales by 2030.

Nissan has been hinting at the expansion it announced Friday for some time. In January, it announced the high-line Infiniti brand would begin shifting entirely to electrified powertrains for all but a few of its models.

Nissan will also be working with its two alliance partners, Renault and Mitsubishi to share development costs on new electrified powertrains and platforms – the three companies collectively aiming to have 17 BEV models in production by 2022. Unlike its Japanese rivals – and many European manufacturers – Nissan’s Klein said his company will largely focus on pure electric and conventional hybrids, rather than plug-ins and fuel-cell vehicles.

That said, it has developed the new e-Power technology to overcome range limitations. But unlike most of today’s plug-in models, the e-Power system uses an internal combustion engine solely as an onboard generator to keep the electric motors running when the batteries are drawn down. The Infiniti brand, in particular, is expected to rely on that system heavily. 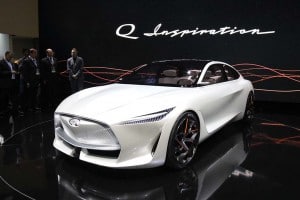 Infiniti showed off its Inspiration Concept in Detroit. It will set the design tone for some future electric models.

“This electrification trend will be deeper and quicker for Infiniti,” Klein told reporters. “Our objective is to position Infiniti as the number one challenger brand in the premium segment.”

(BMW outlines major electrification program. Click Here for an exclusive, inside look of what it’s planning.)

While Nissan hasn’t revealed much about the electric models to come it did confirm it will build a BEV crossover based on the IMx concept vehicle that was unveiled at the Tokyo Motor Show last autumn. There will also be an all-electric minicar for the Japanese market.

As for autonomous vehicles, Nissan was one of the first to commit to the technology, though it has watched as some competitors – including General Motors and tech firm Waymo – have laid out even more aggressive plans. Nissan says it will roll out a series of increasingly capable self-driving systems, starting with the ProPilot Assist technology debuting on the Leaf and several other models this year.

It expects to have fully autonomous vehicles in its line-up early in the next decade, officials said, with a goal of outfitting more than 20 models while generating sales of 1 million vehicles annually.

The autonomous vehicle field has been set into turmoil as a result of last Sunday’s fatal crash involving a prototype Volvo SUV modified by ride-sharing service Uber. Several players in the field, including Uber and Toyota, have temporarily halted testing on public roads but Nissan officials said they expect to continue such development efforts despite the incident.

(For the latest on the Uber crash, Click Here.)