British EV SUV will match base range but falls short on acceleration.

Jaguar now has three SUVs in its line-up, though only the I-Pace is electrified.

Jaguar’s first-ever battery-electric vehicle will start at $70,495 – including delivery charges — when it reaches U.S. showrooms later this year, about $9,000 less than the Tesla Model S.

The British maker is giving the public a first close look at its first-ever battery-electric vehicle at the Geneva Motor Show this week. The I-Pace will soon join Jaguar’s expanding list of sport-utility vehicles which also includes the conventionally powered F-Pace and E-Pace models.

“We set out with a clean sheet approach to harness new battery electric technology with an architecture engineered from the outset to optimize EV performance, aerodynamics and interior space. The result is the I-PACE – a true Jaguar and a truly driver-focused EV,” Ian Hoban, Jaguar’s Vehicle Line Director, said during a media preview last week. 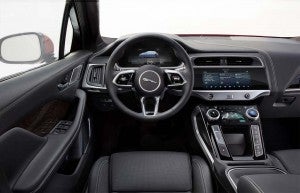 By mounting the batteries and motors under the load floor, the I-Pace interior is larger than its modest exterior footprint suggests.

Based on the Jaguar C-X75 concept vehicle and the subsequent I-Pace prototype unveiled 16 months ago, the I-Pace is likely to challenge assumptions in a variety of ways, especially for those who still think electric means slow and stodgy. Twin electric motors, one for each axle, deliver a combined 394 horsepower and 512 pound-feet of torque, enough to launch the electric ute from 0 to 60 in 4.5 seconds.

That’s inline with a standard version of the Tesla Model X – though not quite as quick as one equipped with the California carmaker’s optional, 518 hp Ludicrous Mode. Either way, I-Pace is one of the fastest utes in its segment, whatever the power source.

The driveline is powered by a 90 kilowatt-hour lithium-ion battery pack that is expected to deliver about 240 miles range using the EPA test cycle, though final numbers haven’t been released yet. Using a standard, 240-volt Level 2 charger, recharging will take less than 10 hours, while a motorist will be able to get an 80% top-off in just 40 minutes plugging into one of the new Level 3 fast chargers popping up across the country. 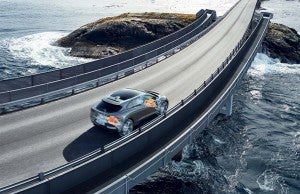 I-Pace uses two motors, one on each axle, to create a through-the-road all-wheel-drive system.

By comparison, the base version of the Tesla Model S offers a nearly identical 249 miles range, though buyers can opt for larger battery packs that extend that to as much as 315 miles. Jaguar has not indicated any plans to offer a larger battery pack option for the I-Pace.

But there will be plenty of other options, including three trim levels: S, SE and HSE. And Jaguar plans to offer a “First Edition” version of the HSE the first year the I-Pace is on the market. That fully loaded version will go for around $86,895. Standalone options range from LED headlamps to a 15-speaker Meridian audio system.

The I-Pace uses conventional doors, unlike the “falcon wing” portals that have been the source of so much trouble for Tesla, the Model X now rated the worst vehicle in the annual Consumer Reports survey of vehicle quality and reliability. Jaguar has had its own quality issues over the year but the maker aims to give potential buyers a sense of security, in part, with an 8-year/100,000-mile battery warranty. 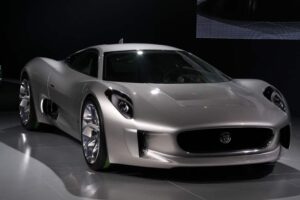 The I-Pace was heavily influenced by Jaguar's C-X75 concept vehicle of a few years back.

Comparisons to the Model X are inevitable. And, as with the Model X, the I-Pace will be able to receive over-the-air updates for its software. Much as with the latest smartphones, that will allow on-the-fly updates, as well as the addition of new features to Jaguar’s InControl Touch Pro Duo infotainment system which features 10-inch touchscreen atop the center stack, and a 5.5-inch touchscreen below that. This will allow for a variety of different functions to be displayed simultaneously, such as navigation and audio.

One feature expected to be a big selling point for the I-Pace is its interior layout. With the batteries, motors and most other key components moved from the engine compartment to underneath the load floor, the Jaguar SUV features a positively massive cabin inside an otherwise compact footprint. It’s the sort of dramatic transformation that is likely to sweep through the auto industry as more and more manufacturers electrify their products and adopt designs meant to take advantage of the way battery drivetrains can be laid out.

(For more on the new Jaguar I-Pace, Click Here.) 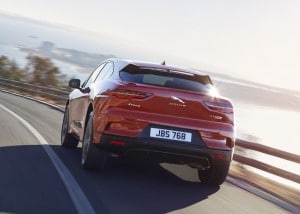 It remains to be seen how the new Jaguar will stand up to several other electric SUVs coming to market over the next year, including one from luxury rival Audi that, essentially, will be a battery alternative to the popular Q5.

Not far from where the I-Pace is being displayed at the Geneva Motor Show this week, meanwhile, Porsche is showing off the Mission E Cross Turismo, a crossover-style variant of the Mission E sports car that will come to market in 2019. Porsche officials are broadly hinting the crossover could join the line-up  in a couple years. Sibling Volkswagen Group brand Bentley is also showing off a new plug-in version of its Bentayga SUV at Geneva’s PAL Expo convention center.

Jaguar itself has said that every new model it introduces from 2020 on will feature some form of electrification, whether a hybrid, plug-in or pure battery-electric drivetrain.