Maker offering up two new versions of the ute. 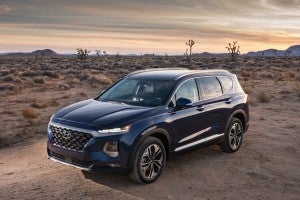 Hyundai is moving to shore up model line with a brand-new version of the Santa Fe.

The 2019 Santa Fe made its official U.S. debut during the press days at the New York International Auto Show and will go on sale this coming summer.

The all-new Santa Fe and Santa Fe Diesel – a first for Hyundai in the U.S. – are the third and fourth of eight new or re-engineered utility vehicles Hyundai plans to debut by 2020 as shifts its model line to keep up with consumer preferences.

Both models are bold SUVs that build on previous generations with outstanding driving dynamics and features aimed at technology and comfort. 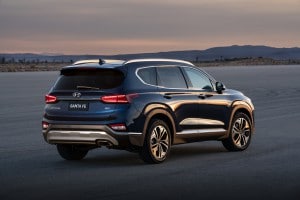 For 2019, the Santa Fe will come in two versions: a five-passenger and a seven-passenger model.

The introduction of the 2019 Santa Fe also brings a shift in names and positioning of the five and seven seat, or three-row version.

An all-new three-row, eight-passenger SUV is currently under development and will carry an all-new name. The diesel version of the 2019 Santa Fe will also get an occasional-use third-row seat with one-touch folding second-row seats for easier access to the third row. The third-row seat will only be available on the Santa Fe diesel.

(Click Here for more about the fourth-generation Santa Fe.)

The face of the new Santa Fe is highlighted by Hyundai’s signature Cascading Grille and a Composite Light design comprising LED Daytime Running Lights positioned on top of the LED headlights.

The exterior design is characterized by a powerful wide stance and an athletic body that makes a statement from 100 feet away. It’s a bold look that is enhanced by refined lines that reinforce the vehicle’s status in Hyundai’s SUV line-up.

(To see more about the updated 2019 Hyundai Tucson, Click Here.)

The profile of the Santa Fe features a dynamic character line that goes all the way from the headlights to the taillights and a larger daylight opening (DLO) with a satin surround that provides a sleek impression along with better visibility. Featured diamond-cut 19-inch wheels communicate strength, as does the car’s rear appearance, now featuring a muscular high and taut shape.