Will 3rd-generation hybrid be the charm? 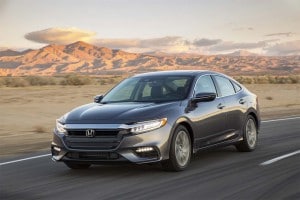 The 2019 Insight is Honda's third attempt to market a mainstream, entry-level hybrid.

Try and try again, Honda is coming back with a third-generation Insight hybrid and hoping it finally has found the formula after widely missing the mark with two earlier versions.

The Japanese automakers offered a first look at a thinly disguised “concept” version of the ’19 Insight during the North American International Auto Show in Detroit. Now, the production model is rolling into the Big Apple. And the model making its debut at the New York International Auto Show adopts a much more conventional appearance – as well as the latest in Honda hybrid technology.

“The Honda Insight shows consumers that the efficiency of a hybrid car doesn’t mean sacrificing style, refinement or performance,” said Henio Arcangeli, Jr., senior vice president of American Honda Motor Co., Inc. “The Insight is another symbol of a new era in the evolution of Honda electrified vehicles, where customers can have everything they want with no compromises.”

The original Insight debuted in 1999, reaching U.S. showrooms slightly ahead of the rival Toyota Prius. It was a technological tour de force, among other things adopting a radically windswept design and a super-light aluminum body and platform to deliver fuel economy nudging 70 mpg on the highway. But the two-seater failed to generate much in the way of market enthusiasm and was pulled from the market in 2006. 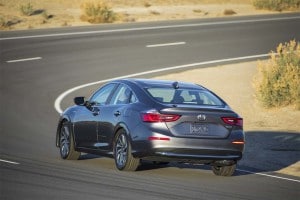 A second-generation model appeared two years later and was billed as the market’s least expensive hybrid. But it, too, languished on dealer lots and was abandoned in 2014.

The Gen-3 Honda Insight appears to be pulling together all the lessons Honda has learned. The new model adopts a low and wide, almost GT-like, design that is both sportier and roomier than the last version. Under the skin, While its wheelbase is pushed to 106.3 inches, it shares the same platform as the current Honda Civic, one of the few passenger cars to retain solid momentum in a ute-crazy market.

The 2019 Insight is being positioned as a bit more up-market than the Civic and it features premium interior appointments that include a soft-touch instrument panel with real stitching, seats sculpted to improve comfort, a seven-inch color driver’s display and an optional eight-inch touchscreen that can work with both Apple CarPlay and Android Auto. 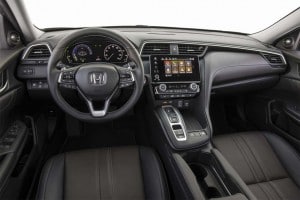 The Insight gets a more roomy and well-appointed interior than the Civic it is based upon.

Honda also claims the new Insight will have some best-in-class interior numbers, with rear legroom of 37.4 inches and 15.1 cubic feet of cargo space.

But what matters most is the introduction of a third-generation hybrid system pairing a 1.5-liter Atkinson cycle gas engine with twin electric motors to produce 151 horsepower and 197 pound-feet of torque.

“Under most conditions,” Honda explains, “the Insight operates as a series hybrid, in which the gasoline engine, connected to the generator motor, produces electricity that is supplied to either the electric propulsion motor and/or the 60-cell lithium-ion battery pack.”

The new Insight offers three different driver modes, including Normal, Econ and Sport. And drivers also can tap a button on the steering wheel to adjust the level of regenerative braking. In its most aggressive setting it recaptures more energy lost during braking and coasting while also minimizing the need to move from throttle to brake.

At most, the 2019 Honda Insight will yield about a mile of all-electric driving. But the automaker estimated it will deliver around 55 mpg in city driving. Full mileage figures, as well as pricing, will be released closer to its on-sale date.

(Honda Accord named North American Car of the Year. Click Here for more.)