Back From the Dead: Chrysler Finds New Use for Old Viper Plant 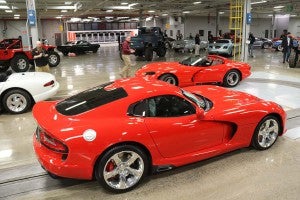 The last Viper - and the original Viper Concept - will join 400 other classics kept at the newly renamed Conner Center.

The Dodge Viper may have been relegated to the automotive scrapheap but Fiat Chrysler Automobiles has found a new use for the old factory on Detroit’s Northeast side that spent a quarter-century building the high-powered sports car.

The Conner Assembly Plant, which was idled last year when production of the Viper was halted, is in the midst of being converted into a combination corporate meeting center and car museum, FCA officials revealed Wednesday. At a media gathering at the 77,000 square-foot plant, meanwhile, they also announced that nearly 2,000 items of Viper memorabilia – ranging from signed hoods to kiddy cars – will be auctioned off, the money to go to a regional charity.

“This is a way to get this memorabilia into the hands of people who will appreciate it … while giving back to the community,” said Mike Tonietto, the last manager of the Conner plant and now a director of manufacturing for FCA.

The Conner plant dates back to 1966, originally opening as a Champion Spark Plug factory. It was taken over by the old Chrysler Corp. which began converting it to build the first Dodge Viper roadster in 1992. Over the years, it also produced the Plymouth Prowler hot rod. 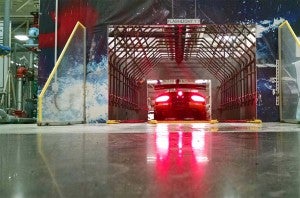 The last Dodge Viper rolled out of the old Conner Assembly Plant in August 2017.

(Jeep Design, Mopar let it all hang out for Moab. Click Here for the story.)

The factory was idled shortly after Fiat and Chrysler teamed up following the U.S. automaker’s 2010 bankruptcy. But it came back to life with the launch of an all-new Viper in 2012. But demand for the V-10-powered sports car fell well short of expectations and production was ended, apparently for good, last year.

While FCA has found ways to keep some old plants alive, such as its factory in the Detroit suburb of Sterling Heights, the compact footprint of the Conner facility – less than the tenth the size of a mainstream assembly line – limited the carmaker’s options.

The alternative FCA has come up with moves it out of the manufacturing realm. Construction has already begun to turn a chunk of the old factory into a modern corporate meeting center that should go into operation by the end of the second quarter of this year, said Christopher Topham, a senior manager at the FCA Design Office.

But the bulk of the plant site will become a combination storage space and museum. It will house about 400 historical vehicles from the FCA collection, some dating back to the earliest days of the companies that eventually came together as Fiat Chrysler Automobiles. 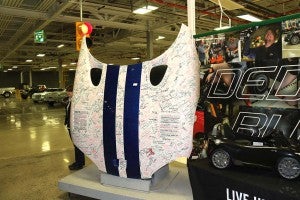 A signed hood, one of 1,800 bits of Viper memorabilia now being auctioned off online.

That includes an assortment of pre-war models, 1960s and ‘70s-era muscle cars, and an array of concept vehicles ranging from the 1941 Chrysler Thunderbolt to the original Dodge Viper prototype.

A special area has been set aside to display that model, as well as the very last Dodge Viper and a number of significant models spanning the quarter century the sports car was in production. In all, about 85 historical vehicles will be on display at any time, though they will likely change frequently, officials said, as parts of the collection are often loaned out for special events.

(Click Here for more about the end of the Dodge Viper.)

Initially, the newly renamed Conner Center will be dedicated to internal operations, but Topham and Tonietto said the company will later consider the possibility of opening it up for meetings and other outside use.

When Viper production ended last August, the Conner Assembly Plant had become a treasure trove of memorabilia. Some notable items will remain part of the FCA historical collection. But rather than just give the rest away or, worse, toss it, Tonietto proposed offering it up to collectors and Viper fans through an online auction running from March 21 through April 13. 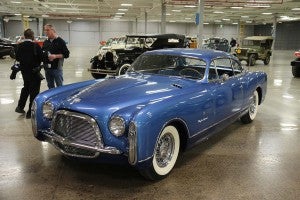 The Conner Center's collection will include this 1953 Chrysler Special, one of only 36 of the Ghia-bodied models built.

The range of items covers a broad spectrum. There are posters and signed Viper hoods, kiddy cars and even the huge sign out front of the old factory that declared it “The Home of Viper.” Some items can be purchased immediately, though most will be up for bid for the next four weeks.

Those interested in getting a piece of Viper history can find it online at www.auction.unitedwaysem.org, the URL reflecting the fact that proceeds will be donated to the United Way of Southeast Michigan.

FCA officials declined to reveal the cost of repurposing the old Conner Assembly Plant. But they noted that it will only have two full-time employees when it reopens, including the corporate historian. When Viper assembly ended last year there were 84 employees at the factory.