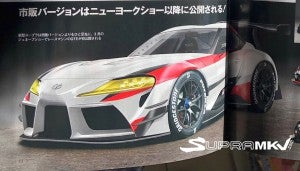 Toyota Motor Co. dropped a broad hint that it is preparing to unveil a concept car at the upcoming 2018 Geneva Motor Show that will signal the impending return of one of its most famous nameplates, the Supra.

However, a Japanese auto magazine, Best Car, released early pictures of the alleged sports car along with a smattering of technical information. The pictures show a vehicle closely related to its MKIV concept car from a few years ago.

The automaker offered only a partial look at the new Supra, a car that helped embellish the Japanese automaker’s reputation for building some of the world’s best cars. The Supra has been gone – but hardly forgotten – from the Toyota model line for the better part of two decades.

“At the 2018 Geneva Motor Show, the unveiling of a modern racing concept will signal Toyota’s commitment to bring back to the market its most iconic sports car,” the automaker said in a press release posted this week on its international website.

The release also included a general invitation to the Toyota press conference at the Geneva Show, which is now scheduled for 9:45 a.m. on March 6. It’ll be at that time that onlookers will see if Best Car’s information that claims the new Supra puts out 335 horsepower and 342 foot-pounds of torque. 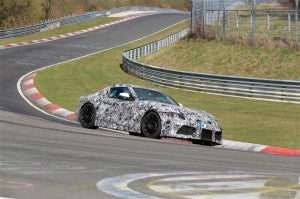 A camouflaged version of the new Supra, courtesy of Britain's AutoExpress.

Toyota CEO Akio Toyoda has not hesitated to press the company’s engineers and designers to develop unique and distinctive automobiles in an effort to reverse the perception the company tends to build boring, staid vehicles.

He has also sought to emphasize the company ties to automobile racing and the British motoring press have suggested that the Toyota scheduled the Supra’s reveal for Geneva so it could carry the badges of Toyota Gazoo Racing.

The automaker says Gazoo itself embodies Toyota’s commitment to overcoming every limit to make “ever-better” cars. To forge new technologies and solutions under the extreme conditions of motorsports.

Toyota has dropped hints about the new Supra, which has been developed with BMW, for the past several months.

Speculation is the future Supra is set to be powered by a turbocharged 3.0-liter in-line six-cylinder engine delivering 340 horsepower. This powertrain is expected to be matched to an eight-speed torque convert automatic transmission.

The launch of this new model marks the first time the Supra namesake has been used since 2002, when production of the previous generation ceased.