Rise in Pedestrian Deaths May be Due to Legal Marijuana, Study Says 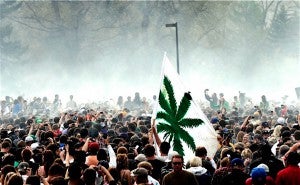 A new study shows that pedestrian deaths are up in states where marijuana has been legalized.

With the number states allowing the recreational use of marijuana the rise, a new study out shows a rise in pedestrian deaths where weed is now legal.

Pedestrian deaths have shot up in states where recreational weed is legal, according to a report released by the Governor’s Highway Safety Association.

During the first half of 2017, fatalities spiked 16.4% in the seven states that legalized weed between 2012 and 2016, plus Washington, DC. Meanwhile, fatalities dropped 5.8% across the rest of the country. There are now nine states where recreational marijuana is legal.

It is important to note that the actual numbers aren’t overwhelming. For example, the 20% increase in Oregon reflects a rise from 29 to 35 people. Perhaps just as important, the deaths cannot be traced to smoking week specifically, the association notes.

(Pot smokers not the only things high on 4/20, traffic deaths are too. Click Here for the story.)

Still, the study’s author thinks the link between the deaths and legal weed—whether it could involve stoned drivers or stoned pedestrians—is “a marker for concern.”

“We are not making a definitive, cause-and-effect link to marijuana,” the study’s author, Richard Retting, told the New York Times. “It may be a canary in a coal mine, an early indicator to address.”

Overall, the number of pedestrians killed by cars nationwide has risen recently, jumping 27% from 2007 to 2016, the study found. And with the number of deaths in 2017 on par with those recorded the year before—roughly 6,000—it doesn’t look like the trend is going away.

(Click Here to see why high-tech safety gear is cutting down on accidents, but causing insurance rates to rise.)

Another recent study showed that traffic fatalities rise on 4/20, the day 20-plus years ago that High Times, a marijuana advocacy publication, designated to celebrate what it perceived as the virtues of smoking pot.

Actually, the results of the study are more educated guess than stone cold fact. Researchers cannot not fully determine if marijuana-intoxicated drivers caused the rise in vehicle deaths on 4/20, but they appear to be the most likely culprits, according to John Staples, an internist and researcher at the University of British Columbia in Vancouver.

(To see more about the push to lower minimum BAC for drunk driving, Click Here.)

“The simplest explanation is that some drivers are impaired by cannabis use, and these drivers are contributing to fatal crashes,” he told Reuters. “There should be very clear messaging to the public: Don’t drive high.”