Semi-autonomous tech moves over from the S-Class. 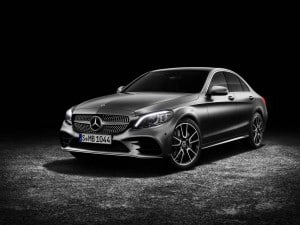 The most important of the introductions by Mercedes-Benz at the Geneva Motor Show may be the midcycle refresh of the C-Class.

It’s going to be a busy Geneva Motor Show for Mercedes-Benz, the automaker rolling out an assortment of new models for global or European debuts, including the new four-door AMG GT, the updated S- and G-Class models, the all-new A-Class, and an updated C-Class.

While that compact sedan may only be getting a midcycle refresh it could prove to be the most significant of the introductions considering that the C-Class remains Mercedes’ global best-seller, generating more than 400,000 sales in 2017. Freshening it up will be critical at a time when more and more buyers are shifting from passenger cars to SUVs and CUVs.

Both the C-Class sedan and wagon models will be updated for 2019, and while exterior and interior changes will be modest, buyers will be tempted with an increase in power, as well as the addition of new semi-autonomous technology lifted from the lofty S-Class and able to handle a limited amount of hands-free driving.

From a visual standpoint, there are new bumpers, revised front and rear lighting – including Mercedes’ Multibeam LED headlamps and Ultra Range high beams – and other minor tweaks. Perhaps the most significant changes can be found on the AMG line, where the diamond grille now becomes standard. 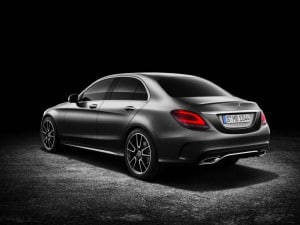 The upgrade of the C-Class will garner attention as it is the automaker's best-selling vehicle at more than 400,000 units.

(Mercedes dropping out of the Detroit Auto Show in 2019. Click Here for the story.)

Inside, there’s an updated center console with what the automaker calls “flowing trim” and wood veneer. The control and display system is lifted from the S-Class and offers and optional fully digital instrument cluster, as well as touch-sensitive controls now built into the leather-wrapped steering wheel which can be operated much like you would a smartphone.

Surprisingly, neither is touch-sensitive. And Mercedes has opted not to integrate the new MBUX infotainment system into the updated C-Class, at least not yet. First shown at the Consumer Electronics Show last month, it will make its vehicular debut in the new A-Class coming to Geneva before rolling out through the rest of the Mercedes family line-up. 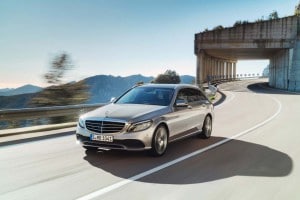 The new C-Class is getting some of the tech upgrades that have been trickling down the Mercedes portfolio.

(Click Here for a first look at the Mercedes-AMG G63.)

Both mainstream versions of the C-Class will be powered by a turbocharged 2.0-liter inline-four now making 255 horsepower – 14 more than the 2018 model – and 273 pound-feet of torque. The engine is paired with a fuel-efficient nine-speed automatic. Rear-wheel-drive is the normal configuration, but C-Class buyers can opt for the 4Matic all-wheel-drive package, as well.

The German automaker has been an aggressive proponent of self-driving technology – recently being ranked among the top manufacturers in the emerging field by Navigant Research. While fully autonomous models are still at least a few years off, Mercedes has been offering ever more sophisticated semi-autonomous technologies and working them down from the S-Class into more mainstream offerings. Now it’s time for the C-Class to get in line. 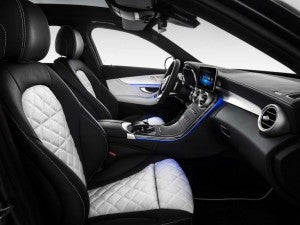 The 2019 Mercedes-AMG C-Class interior gets a variety of options, including a choice of two video screens to monitor vehicle functions.

While it doesn’t use LIDAR, a 3D-laser technology, it does pair radar and cameras that can keep an eye on what’s happening around the vehicle – and as much as a third of a mile ahead. That allows a driver to briefly take hands off the wheel on many well-marked limited access roadways. And even when operated manually, it can spot a potential collision and apply the brakes automatically if the driver is slow to react. Tapping the turn signal, meanwhile, will trigger the C-Class to make a pass automatically.

Other features lifted from the S-Class include lighting and seat controls meant to adjust a driver’s mood, even spritzing the cabin air with scents that can either calm or energize.