Rear autobraking can prevent a wide range of crashes. 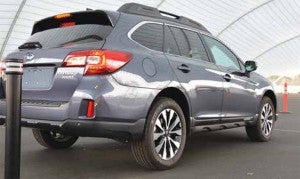 IIHS said Subaru and Cadillac had the best rear autobraking systems of the versions tested.

Motorists risk getting into crashes anytime they move their vehicle, including backing into or out of a parking spot. While rear crashes are less likely to result in injuries or death, they can still generate significant repair costs.

That’s where an assortment of new rear crash prevention technologies are coming into play. These cover a range of alternatives, including rear-facing cameras, sonar parking sensors, radar-based cross-traffic alert, and rear auto-braking systems that can not only detect a potential obstacle but also prevent the car from hitting it, even if the driver doesn’t react quickly enough.

“Let’s face it. Some days we all could use help backing up, whether that’s in a garage with pillars that obscure your view, in a crowded mall parking lot or on a busy downtown street,” said David Zuby, the chief research officer for the Insurance Institute for Highway Safety which, for the first time, has evaluated and rated the most advanced of these systems, rear autobraking, on six 2017 models.

“The systems we rate in our first batch of tests will help reduce the chances of a backing fender-bender,” Zuby explained, each falling into one of three categories: superior, advanced or basic.

The six models that included optional rear autobraking were the:

The top, or superior, performers were the Subaru Outback and Cadillac XT5 – when equipped with the optional technology. The Cherokee, 5-Series, QX60 and Prius all earned advanced ratings.

The good news, said IIHS, is that all six models used technologies that prevent crashes – and, at least with some vehicles, by a significant amount. A separate IIHS study that looked at General Motors vehicles equipped with a rear camera, rear parking sensors and rear autobrake found a 78% reduction in the number of backup crashes serious enough to be reported to police. Similar technology in Subaru models also found a reduction in crashes.

For the new ratings system, IIHS puts the biggest weight on rear autobrake technology, a summary noting that it “provides the biggest crash reduction.” To earn a superior rating the technology in a vehicle must be able to avoid a crash entirely or, at the least, reduce its speed substantially in a number of different scenarios – each tested at about 4 mph. An advanced vehicle works in some, but not all of the test scenarios. Vehicles not equipped with rear autobraking can only qualify for a basic rating.

Forward-facing Automatic Emergency Braking, or AEB, has become increasingly commonplace in today’s new car market and all but a handful of niche automakers have entered a consortium aiming to make the technology standard by the beginning of the next decade.

In a series of tests using vehicles equipped with and without rear autobraking, the payoff was significant. A Cadillac XT5 avoided backing into a pole when the technology was available, but it otherwise struck the obstacle and ran up estimated damages of $3,477. A Subaru Outback likewise avoided striking a Chevrolet Cruze behind it when autobraking was used, but it otherwise hit the target car and ran up $1,899 in combined damage to the two vehicles.