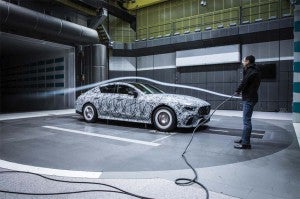 The new Mercedes-AMG GT four-door is among the slipperiest sedans money can buy.

Think of them as tattoos, rather than camouflage, for there’s little left to the imagination in these shots of the new Mercedes-AMG GT four-door as it goes through wind tunnel testing ahead of its formal debut at the Geneva Motor Show next month.

The current GT is one of the more wind-slick models on the market, but stretching its length and wheelbase and then adding two more doors threatened to change aero equation massively, so it’s no surprise the German automaker designers have been spending so much time in the tunnel.

“Final tests will be carried out in the wind tunnel before the new member of the AMG GT family has its world premiere at the Geneva Motor Show,” the automaker said in a statement accompanying these images, adding that, “It is already clear that the new family member is also a fine aerodynamic performer.” 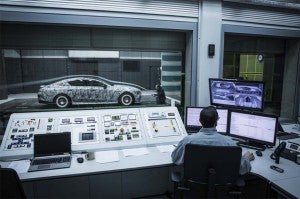 Mercedes-AMG put the GT family through its wind tunnel paces in advance of the Geneva Motor Show.

The new model combines both passive and active aero controls, including a version of the pop-up rear spoiler found on the original two-door AMG GT.

Looking past the modest camo still in place, we see that the new GT carries over the two-door’s Panamericana grille and large air intakes. It adopts a more fastback look with an expansive, apparently all-glass roof,

Set to go up against the likes of the Audi RS7, BMW M6 Gran Coupe and Porsche Panamera, it shares many of the basic underpinnings found in the latest-generation Mercedes E-Class.

(Click Here for a first look at the Mercedes-AMG G63.) 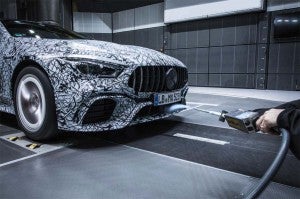 Ensuring the new GT four-door cuts the wind is critical to the car's performance.

We’re still waiting for hard specs, but no one would be surprised if it shared the two-door GT’s biturbo 4.0-liter V-8 tuned to turn out something in the 600 horsepower range. The various versions of the original grand tourer make anywhere from 469 to 577 hp.

That’s actually a bit tame compared to the concept version that we first saw a year ago. Borrowing heavily from the W08 EQ Power+ drivetrain in the Mercedes-AMG Petronas Motorsport Formula 1 racer, that four-door “coupe” concept punched out a full 805 hp. The GT Concept, we should add, was a plug-in hybrid and with Mercedes planning to roll out a flood of “electrified” models by the middle of the coming decade we would be far from surprised if we see a PHEV version of the four-door. Maybe not right away, but at some point during its lifecycle.

One of the remaining questions is what Mercedes-AMG will name the new offering. Some suggest it could be dubbed the GT4, others the GTC4. We’ll likely have to wait for Geneva to get the answer to that mystery, with the grand unveiling scheduled for March 6th.