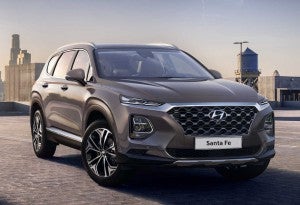 Hyundai continues to grow is utility line-up with the New Generation Santa Fe, which will be the largest vehicle in its line-up.

Hyundai’s been making a lot of noise about expanding its offerings within its sport-utility portfolio, including a larger, full-size ute that seats seven people. The New Generation Santa Fe is coming and now we get a look.

The South Korean automaker released a couple of pictures prior to the Chicago Auto Show to give folks something to compare with other full-size vehicles on display. Hyundai doesn’t plan to show off its new Santa Fe until the Geneva Motor Show next month.

The new ute is the company’s largest vehicle and the fourth-gen model of the Santa Fe. It “displays a modern and elegant appearance complemented by eye-catching twin headlights and the cascading grille, Hyundai’s SUV-family identity,” according to the automaker.

Adding a large SUV is important to the automaker, which was late in deciding to expand its SUV portfolio and has been playing catch up ever since. 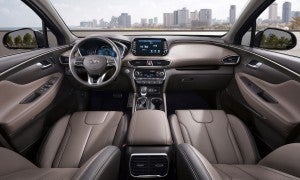 The interior of the new Santa Fe reflects upper end finishes and simple, clean controls for the HVAC as well as infotainment systems.

The previous Santa Fe becomes the Santa Fe Sport, a smaller version of the current model. Additionally, the company has been growing its line-up at the smaller end, which is a burgeoning segment as well with the new Hyundai Kona.

There are two utes in the current Hyundai line-up, including the smaller Tucson. But with utility vehicles now accounting for half of U.S. new car sales, and a growing share of the global market, the South Korean company will be expanding its mix over the next several years, starting with the new Kona electric model.

(Click Here for more about the fourth-generation Santa Fe.)

It’s even working up a production version of the compact Santa Cruz pickup that was a hit, in concept form, at the Detroit Auto Show a few years back.

Several powertrain packages are likely, with an emphasis on a V-6 for the bigger model and an inline-four for the Santa Fe Sport. Hyundai has been pushing fast to electrify its line-up, as the addition of the Ioniq and the upcoming Kona demonstrate. Few would be surprised to see some sort of battery-based package added to the Santa Fe line-up during the next few years.

We’ll have to wait to see what’s in store for the smaller Santa Fe Sport but there have been some hints that Hyundai might rejigger its nameplates, perhaps even rechristening the three-row model the Veracruz. That’s what it called an earlier – and largely forgotten – model dropped back in 2012.