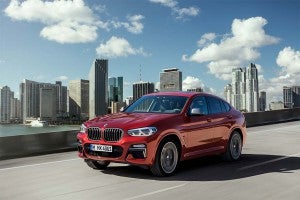 The 2019 BMW X4 grows in all dimensions but one, with its roofline lowered a mere 0.1 inches.

BMW is blowing a kiss to fans of its Sports-Activity Vehicle line-up, giving a first look on Valentine’s Day at the next-generation X4.

The Bavarian automaker has been filling in just every possible niche with its SAVs, most recently debuting the new X2 so, it seems, it’s heading back to refresh the rest of the line-up. If you get a sense of déjà vu, no surprise, considering the 2019 X4 shares most of its underpinnings with the latest BMW X3.

(Click Here to check out the new BMW X2.) 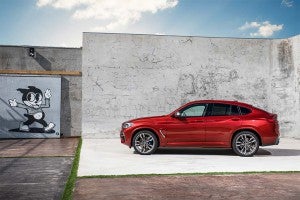 BMW will offer two versions of the new X4, including a more powerful M Performance edition.

Up front, the new model adopts a larger and more three-dimensional take on the classic BMW kidney grille, framed by twin headlight units and horizontal fog lamps. Add the outer air intakes and van Hooydonk’s team has given the X4 a six-eyed face. All lighting, incidentally, is LED.

A strong shoulder line, balanced by a character line stretching from front to rear wheel arches, helps break up the tall sides. That coupe-like roofline, meanwhile tapers rearward, flowing into the back glass. The taillights push out to the edges of the X4’s back end and, when combined with twin tailpipes, gives the ute a broad and hunkered down appearance.

BMW plans to offer two models, at least initially, a standard xLine and an M Performance model. (We’ll wait to see, but would be surprised if a true M edition doesn’t follow.) Both come with model-specific 19-inch light-alloy wheels.

The M Performance package adds sporty details like front and rear aprons and side skirts, as well as High-gloss Black accents. 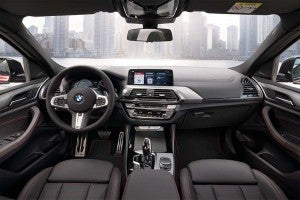 The interior, BMW suggests, is roomier and more premium in feel than the outgoing X4. The instrument panel sits low, giving a commanding view of the road, especially with its higher seating position. The redesigned sports seat offer more bolstering and lateral support. Additional lighting around the foot wells, instrument panel and foot wells gives the cabin a more elegant feel, and can be adjusted by the driver with a choice of six different colors. A standard panoramic seat brings in more light and enhances the new five-seater’s feeling of spaciousness.

The X4 features some of the latest BMW infotainment technologies, including the newest BMW Connected features, all accessed through a 10.25-inch standard high-resolution display with standard navigation. There’s also a next-generation Head-Up Display option that’s 75% larger than on the old ute.

At launch, BMW will offer a choice of powertrains, including the xDrive30i package making 248 horsepower and 258 pound-feet of torque. The TwinPower turbo system will launch the X4 from 0 to 60 in a flat six seconds. The M Performance package’s inline six bumps the numbers up to 355 hp and 365 lb-ft., while cutting launch times down to 4.6 seconds. Both xDrive packages bias torque to the rear under normal driving conditions. 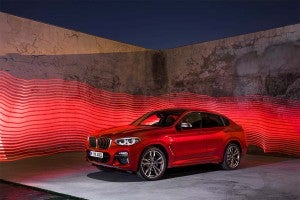 While few will test its limits, the new X4 will be able to ford nearly 20 inches of water.

While not likely to see much serious off-road use, BMW says the 2019 X4 is not just a soft-roader. It has ground clearance of eight inches and can ford water up to 19.6 inches in depth, helping it take “in its stride…everything…from crests and bumps in the road to gravel tracks, icy roads and steep slopes.”

The new X4 features a broad array of standard safety gear and new advanced driver assistance technologies and, depending upon the market, can even use its On-Street Parking Information systems to help find available spots.

Look for the new 2019 BMW X4 to make its official debut at the upcoming Geneva Motor Show, with the first of the utes set to roll into U.S. showrooms later this year.